[H]ow much of a problem is ‘already knowing how the war ended’ for Saving Private Ryan?”

Stokes is, of course, super-smart, and he’s usually right. He’s right here, too. Prequels like DISCO can be seen as a form of historical fiction. Already knowing and caring about the Klingons and the Federation doesn’t obviate any desire to watch something like Discovery. On the contrary, it creates a big chunk of the demand for it in the first place.

And of course there are tons of stories about new and old characters mixing and mingling, living out their own stories, against events that are real or fictional, rumored or written in stone. It’s a great genre.

I may still have some issues about how DISCO deals with its characters versus the scope of history, but I at least want to try to understand where it stands with regards to historical fiction. And, reaching into my quiver of terms and not finding one, I followed Overthinking It tradition and made one up. 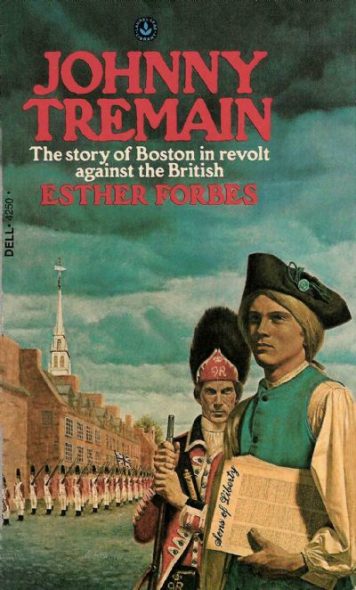 The children’s book Johnny Tremain (and the lesser-known Disney movie based on the book from the late 1950s) is about a fictional 14-year-old boy with an improbable front seat to the sparks setting off the real-life American Revolution.

Fans of human drama remember the central pathos of the story around Johnny’s disfiguring hand burn, which drives him from employment as a silversmith’s apprentice. But as Johnny deals with his newfound disability, he passed through a checklist of factors, people, and events who contributed to the outbreak of the war across the Greater Boston area.

He makes a dish for John Hancock. He deals with shipping interests around Boston Harbor. He is arrested and tried for a crime he didn’t comment in the English colonial court. He personally dumps tea in the water during the Boston Tea Party. He delivers a politically active colonial newspaper. He acts as an informal courier for the British military. He joins the Whig party. He joins the Sons of Liberty. He hangs out with well-known real people like Sam Adams and fellow silversmith Paul Revere, and less well-known real people like Dr. Joseph Warren and James Otis. In the end, he witnesses the planning of the battles of Lexington and Concord, and has emergency surgery so he can participate in them personally.

Oh, yeah, spoilers for Johnny Tremain, and for the American Revolution. Here’s some clips from the late 1957 Walt Disney film adaptation of the book.

There’s nothing wrong with any of this. Johnny Tremain is at least in part an educational book, meant to teach children in an interesting and exciting way about these real-life events. But it’s a contrivance to have one made-up person, especially a child, not just witness, but contribute to this many of the important events around an historical event.

I don’t begrudge storytellers this contrivance, but it’s a contrivance. It’s similar to aristocratic hero stories like Star Wars or superhero movies that have become such a dominant part of commercial entertainment. Of course it is right and proper that the right person who matters the most has the biggest impact, beginning to end, on some huge conflict that affects everybody alive. Even though this isn’t how the real world works, for the most part.

And this sort of relationship between large events and individual people (or small groups) is one way to tell a story about history, too.

But I’d divide this relationship up into three dimensions:

And I’d like to introduce a concept called the “Johnny Tremain Quotient” or just the “Tremain Quotient,” which I’m sure TV Tropes already has a name for, but I don’t care.

Roughly I’d formulate it, roughly as such:

The TQ of a character or group of characters,
relative to a known historical event =

So, for Johnny Tremain, I’d say that, out of a 10, Johnny’s witnessing of the Greater Boston area leading up to the battles of Lexington and Concord is a 7.

I’m talking here about how much of what they see they get personally involved in, not necessarily how much they decide the outcome themselves. After all, Johnny Tremain has arguably little or no impact on the actual course of history, but he personally pitches in on almost everything he encounters, and that’s part of gives the story the specific kind of feel I’m talking about.

I’d say Johnny’s contribution score is a 6, since he actually puts his hands on silversmithing, tea, and muskets, and because real-life Whig doctor Joseph Warren performs surgery on him.

As for how much of the story is about him, rather than about the unfolding of the historical events, it’s not much. He meets a friend, but the friend ends up getting fridged hard to motivate Johnny to fight the redcoats. I’d say about 30%.

To go back to Stokes’s question, talking about Saving Private Ryan, that’s a great example of a good story with a high level of fidelity to history, and a lot of detail, but not a huge Tremain Quotient for its main characters.

How much of the D-Day invasion does Charlie Company in Saving Private Ryan witness? I’d say it’s medium. Compared to something like The Longest Day, not that much. Saving Private Ryan is grounded more in the scale of human experience, and most of the people in the story are fictional. There’s one contrived scene where we see George Marshall personally order Private Ryan to be Saved that gets handed down to them. They don’t go visit all the beaches of Normandy to see how each of them is different from each other, although they do encounter both land and sea. Saving Private Ryan shows a lot less of D-Day, or even just of Omaha Beach, than Dunkirk shows of Dunkirk. So I’d say it’s a 4 out of 10.

For how much they contribute to, it’s even less. Their own mission is pretty narrow and focused, and most of the variety they encounter is stuff they see rather than stuff they do. There’s a crashed glider, but Charlie Company doesn’t fly it. So I’d give that a 2 out of 10 (really a 2 out of 4).

As to how much is the story of the people involved, rather than the story of the D-Day invasion, that’s high. The movie is set up orthogonal to the invasion, probably because Spielberg wants to get away from this kind of contrivance. The characters aren’t interested in saving America from the British, like Johnny Tremain, they are Saving Private Ryan. So I’d say 70% of it is about the characters.

Really, that low? Does Johnny Tremain really feel more than 10 times more Johnny Tremain-ey and dependent on the story of the history than Saving Private Ryan, even though the latter is more detailed, more robust and likely more accurate?

You know, yeah. Yeah it does.

The scale isn’t linear. It rises exponentially when a character moves around an historical event and sees it from a bunch of different angles, and I think that’s part of the point.

So, to bring it back to Jordan’s question of Star Trek: Discovery. Let’s say we treat the Klingon-Federation war as a known historical event. We know that by the time Star Trek: The Original Series rolls around, the two sides will have reached no conclusive winner. They will cool off their war only to briefly spark it just as they encounter the Organians.

With that in mind, what is Michael Burnham’s Tremain Quotient? 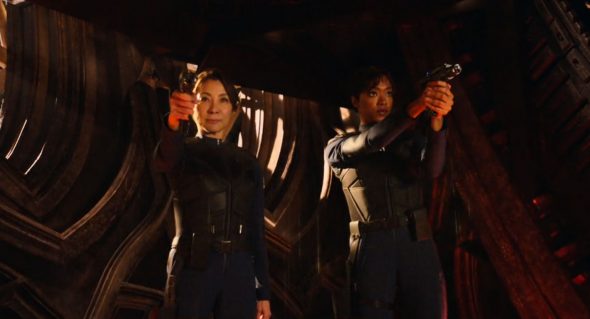 There are only a few events we can think of in this war that Michael Burnham isn’t present for. She isn’t there for the power play by the House of Kor, which means she just barely isn’t connected to the great Klingon warriors Kor, Koloth and Kang, who would go on to notable featured parts in three other Star Trek series.

Not that this is odd for Star Trek. Kirk and Picard and even Sisko have been present for a lot of stuff. But the war in Discovery is something of an historical war, and besides, this matters less in terms of judging Discovery against other Star Treks, or even judging Discovery at all, than in talking about how it handles the intersection of individual people and large events, on its own terms.

So yeah, Michael Burnham probably gets an 8 for witnessing, a 7 for contributing, and about 50% for how much of her story is distinct from the plotline of the war.

Is the story of Star Trek Discovery’s main protagonist really ten times more dependent on the major happenings of the Klingon-Federation War than the Saving Private Ryan protagonists are in D-Day? Again, the numbers are nonsense, but yeah, I think so. 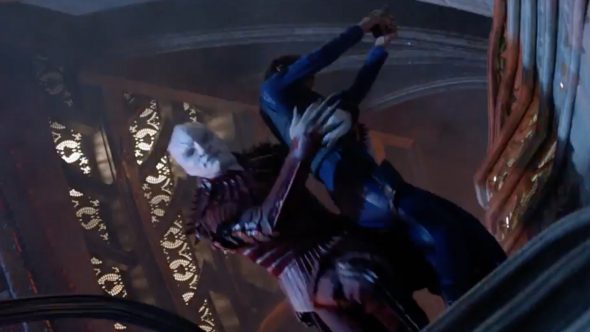 It starts with a collision between two people who set off on symmetrical arcs. Michael Burnham is set adrift by the death of Captain Georgiou, and Voq the albino Klingon is set adrift by the death of T’Kuvma, his political and spiritual leader. Each sets loose a key technology with the chance to give their side the decisive edge in the conflict: Michael has the spore drive on Discovery, and Voq has the cloaking device from the Klingon ship of the dead.

Both end up prisoners, both see their work misused by factions within their own government that they don’t support, both are shipped to the Discovery by Captain Lorca because he thinks he can use them, and then together they encounter the Pahvo, who are set to play a decisive role in the conflict with their semi-magical techno-call to universal harmony.

Wait, both are on the Discovery? Say what?

With the season finale in just a few days, we still don’t really know what happens, and I’m perfectly ready for this to be wrong and for me to look stupid, but one widespread fan theory is that Ash Tyler, the prisoner-turned-security officer taken out of the Klingon prison by Captain Lorca, is the Albino Klingon Voq, in disguise or transferred to another body.

This isn’t my idea and has been much bandied about on the internet, but here are the basics: 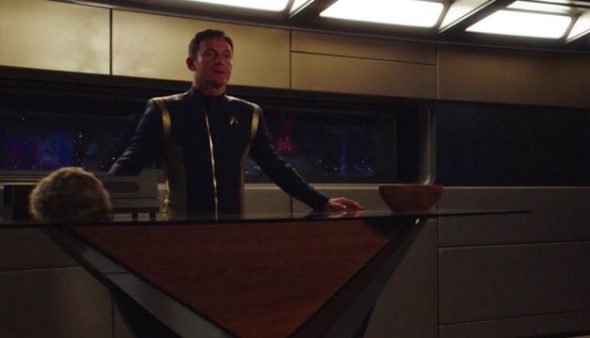 And, the more flimsy evidence:

Oh, I almost forgot the best evidence of all: 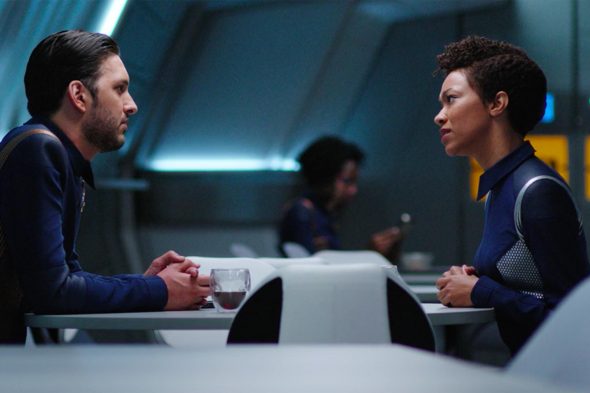 Worf gets his first glass from Whoopie Goldberg and is crazy about the stuff.

The point for our purposes is that, if Ash Tyler is Voq, then Michael Burnham and Voq have together been present for almost everything that has happened in the war that matters at all, on both sides. The Klingon-Federation War becomes a story of macrocosm and microcosm, where the rift between these two peoples is made manifest in these two individuals.

For all of DISCO’s merits or flaws, there isn’t much to separate the people in it from the grand events around them, with known or unknown outcomes.

Call it a dance with history. 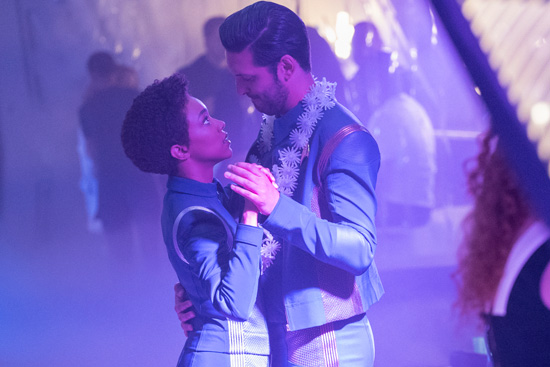