But in the case of Kingsman, the formula is a little different. The goal isn’t for Eggsy to bring his working class approach to the spy game, nor will he be spying on working class stiffs in run-down pubs. Rather, he aims to go the full My Fair Lady (a metaphor he actually suggests) and learn to blend in with billionaires. There are moments where his background is an asset, but in general the theme seems to be overcoming his class, not embracing it as the source of his strength.

Peter Fenzel: Yeah, in the first Kingsman, his cultural participation in his class includes internalization of his own worthlessness and uselessness. And this is put forth as inauthentic to his nature and personality—based on who his father was, based on his aptitude, and based on what he seems to think and want and talk about. The main benefit of him learning how to put on the dress and manner (to an extent) of a gentleman is that he creates a barrier between the misery and degradation around him and his own will. This, in turn, helps other people in his class as well as everybody else, as they benefit from his new capacity for action. Plus he is more fun to hang out with because he is happier without the learned helplessness.

In Kingsman, the exterior trappings of gentlemanly culture are suggested to be a “suit of armor” that protects you from violence (physical literally, psychological figuratively).

Belinkie: Let’s zoom out a little. James Bond started out more in league with the aristocracy than the working man. In the novels he’s at least upper middle class (he can afford a servant, for instance). That comes out in the way Connery established him in the films. For instance: “My dear girl, there are some things that just aren’t done, such as drinking Dom Perignon ‘53 above the temperature of 38 degrees Fahrenheit. That’s just as bad as listening to the Beatles without earmuffs!”

Compare that to the way Craig was set up in Casino Royale, more than 40 years later. He was a bruiser, a guy who would wear a tuxedo like a costume but didn’t really belong in one. When someone asks him if he wants his martini shaken or stirred, he snaps, “Do I look like I give a damn?”

And of course, Jason Bourne is very salt of the earth. Impossible to imagine that guy at a fancy dinner party, or even wearing a button-down shirt.

One spy movie I have trouble classifying by class is the Mission: Impossible series. On the one hand Tom Cruise’s Ethan Hunt is certainly comfortable in a tux, hobnobbing with the rich and famous. But he also happily goes undercover at a Russian prison. He’s Tom Cruise perfect, which makes him kind of personalityless and devoid of class.

Matt Wrather: I think we need to distinguish between European movies and American ones. Traditionally, there is a sense in the cultures of Europe, that the aristocrats—the classy—are actually more worthy: more hospitable, more courteous, more generous. In Downton Abbey, it was Lord Grantham vs. Sarah Bunting—the widower Branson’s girlfriend was right about the class struggle, but wrong on the human factor: she had terrible manners.

America, where it is actually illegal to hold a hereditary title, has a compensatory fixation on “identity”—on individual characteristics which elevate one person above others, but for which birth is no longer a satisfactory explanation. It’s “classy” without “class.”

If only someone could vault it with a car.

Jordan Stokes: Bourne plays some interesting games with this if you get down to the nitty gritty. In the first movie, Bourne is this American blank slate running around Europe — he encounters culture everywhere, but has no culture himself. Compare to Bond: Bond’s deal is that he knows what to do in any situation, right? “Oh, we’re playing chemin-de-ferre? Well deal me in, old bean!” Assuming chemin-de-ferre is played with cards, that is—I’m an American; I wouldn’t know. And neither would Bourne. He’s confused and out-of-place EVERYWHERE.

Where this acquires some texture is with the Clive Owen character—one of the other Treadstone assassins that they send after Bourne. Presumably these guys are all equally ranked, but Owen seems like the “boss” hitman. He’s the last one Bourne faces, and he’s the one that drops hints about Bourne’s identity just before he bleeds out. He’s also HIGHLY Bond-like. I mean, he’s Clive Owen, first of all. And his code name is “The Professor.” When he’s not off killing people, he’s a well-heeled music teacher!

Bourne doesn’t have class markers of his own, but they are cast upon him like shadows by the places where he is out-of-place. Nothing about him screams blue collar, but he has no idea how to handle a Swiss Bank.

Think how it would have read if he kept his spare passports in one of the portapotties at the Gathering of the Juggalos. Matt Damon staring at a 2-liter of Faygo, all like “I don’t know what I’m supposed to do with this.” Love interest played by Diane Kruger instead of Franke Potente; instead of punk-dyed hair she has a $8000 Armani pantsuit.

Belinkie: The Samuel L. Jackson character in the first Kingsman is clearly a comment on class. He’s super duper rich, but he hasn’t shed his lower status signifiers. At one point Colin Firth goes undercover as a billionaire and Jackson invites him over for dinner. He brings him to a fancy dining room, and his servant brings out a silver cart… filled with McDonalds burgers. “I’ll have the Big Mac,” says Firth unflappably.

There’s a lot going on here. First, there’s the idea that even though Jackson is the kind of powerful man who can tell the President what to do, he still loves to eat McDonalds. But beyond that, Jackson is flaunting his humble taste in cuisine and forcing it upon someone who presumably looks down upon it. And then finally, there’s Firth’s embrace of the food, perhaps not so much because he enjoys it but because he’s too well-mannered a guest to do otherwise.

Later in the movie Firth’s character quotes Hemingway in a very revealing line: “There is nothing noble in being superior to your fellow man; true nobility is being superior to your former self.” But in his mind perhaps, “superiority” means adopting the outward markings of sophistication: wearing nice suits, speaking with a proper accent, asking permission before taking a seat, etc. Samuel L. Jackson, to him, is morally delinquent because he has not evolved and developed a taste for steak. 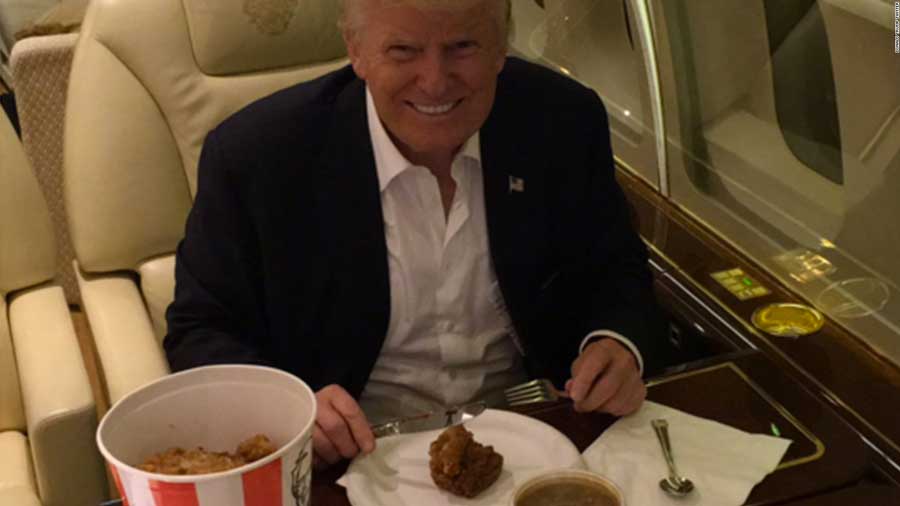 Kingsman (the first one) predates the accession of Trump, but I can’t help but think of Trump tweeting a picture of himself eating KFC on his private jet. From the Kingsman perspective that’s a bad thing; outgrowing KFC is a mark of sophistication. But for an American, refusing to outgrow KFC is a virtue. We love anecdotes about rich and powerful people who are in touch with their roots.