The most impressive thing about The Good Place is how deftly and confidently the show has juggled both an extremely high-concept premise and a dizzying series of twists and turns. A less confident show would have spent a whole season on V2.0 of Michael’s torture-box-Good-Place — instead, we get the Season premiere reset, and then an episode 3 that cycles us through hundreds of iterations of the torture scenario, dropping rapid fire jokes and food puns at a breathtaking pace.

Note how different this style is than your typical comedic TV show, where the action resets essentially back to square one at the end of every episode. On most sitcoms, each episode starts more or less in the same place as every other episode. The Simpsons is probably the most notable example of this, where the family has not aged in nearly 30 years, and only a tiny handful of plot points have crossed over from one episode to the next. Even lightly serialized shows like Friends are still mostly devoted to preservation of the status quo from week to week.

The Good Place, on the other hand, was serialized from the jump: even before the big Season 1 reveal, each episode built on the last. We got to see the characters develop; each plot point sent out ripples through the rest of the story, in exactly the same way that you might see in a prestige drama or more traditional serialized story.

Which I bring up only to note that we have, after several mind-blowing and world-altering twists, come more or less full circle. The Pilot episode promised us a story of a person who (1) needed to keep a secret; and (2) wanted to become a better person in order to earn her spot in the Good Place.

Now, some 15 episodes later, we’re right back telling a similar story about a cover-up and a mission to become a better person. Only this time, instead of just being Eleanor’s mission, it’s Team Cockroach’s: they’re all trying to (1) keep a secret; and (2) become better people in order to earn their spot in the Good Place. 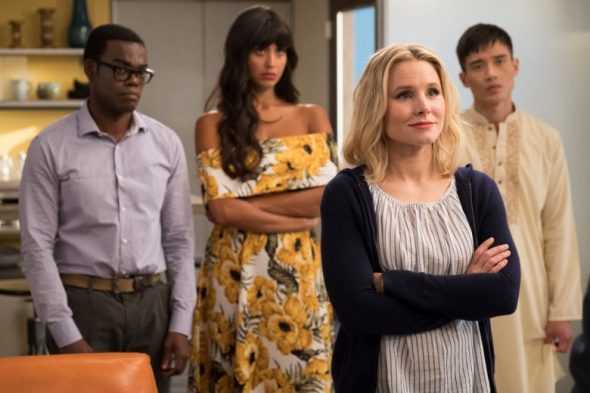 And in the hands of a lesser show, I might have groaned at this plot development. As a general rule, I HATE plots that revolve around elaborate ruses and long running conspiracies. But The Good Place has earned a great deal of trust.

That said, I may be getting ahead of myself: this episode, standing alone, had some key moments worth unpacking.

The one that stands out the most is probably Tahani’s big revelation about why she deserves to be in the Bad Place. Michael tells us that he’d been “saving” the memory of how she died for when he really wanted to torture Tahani, and to be sure, the moment is brutal: totally humbled and humiliated, she dies pulling a Saddam-Hussein-statue tear-down of her own sister at the Rock and Roll Hall of Fame. In Cleveland.

But in this moment we also see why Michael’s plan to torture these 4 particular “cockroaches” just doesn’t quite work. Tahani hates the idea of herself being a bad person and it’s no doubt extremely painful to realize how shallow she had been. BUT in that realization, she gets the motivation she needs to try to become a better person — as she says, to become the person she always pretended to be. The torture doesn’t work because she has a hope of redemption.

When it comes right down to it, this episode really highlights the key role of Chidi in Michael’s downfall. By putting an ethics professor in their midst, Eleanor and Tahani have at least a *hope* of someday deserving the real Good Place, which takes the sting out of so much of the intended torture. Even when Eleanor believed she was wrongly in the Good Place, her lessons with Chidi gave her the hope that someday she might *earn* her spot.

Ironically, Michael now finds himself in the same position of trying to improve himself to avoid eternal torment. It will be interesting to see if this inspires any self-reflection on his part. Because one thing that hasn’t really been settled with any degree of precision is what, exactly, the demons like Michael and Vicky are.

Because demons are not traditionally subject to the same whims as humans. Indeed, in most tellings, they  don’t even have free will in the same sense as humans. They are just personifications of abstract concepts, or hopelessly twisted creatures with nothing resembling an inner life.

But on The Good Place, it’s clear that, by and large, the demons enjoy their work of tormenting humans. We have the guy who just likes biting people; or Eleanor’s second soul mate who is really good at twisting them; or Vicky who apparently likes singing terrible renditions of pop songs at them. A lot of the show’s comedy revolves around the idea that these demons are really Just Like Us. They have a job. They have bosses. They get bored. They get frustrated. They want more lines. Etc.

But at the same time, if we saw these demons doing what they do best — twisting, biting, smashing body parts with hammers, etc. — we probably wouldn’t find it so easy to empathize with them. Only because of this unique setup, where the demons have to hide their worst impulses to maintain Michael’s fiction, are we able to maintain the appropriate amount of empathy with these enemies of humanity.

The Good Place has always thrived on the well drawn and unique characters that make up our foursome of humans — I’m not certain there’s ever been a TV character quite like Chidi’s hapless but fundamentally decent professor, or Tahani’s insecure super model heiress, or Jason Mendoza’s broish goofball from Jacksonville.

I am very much looking forward to seeing what Team Cockroach gets up to next.

One Comment on “The Good Place Unlocked: Season 2 Episode 4”