The kingdom always needs a Monarch to declare war, nod at visiting dignitaries, and ensure the divine transition of power from generation to generation. But while the Monarch is the state, you need someone to do the acts of statehood. You need heralds, who can announce visitors and declare the events of the day. You need counselors, who can offer up judgments and deliver wisdom. And you need jesters, who can call attention to hypocrisies and make the sacred a little more tolerable.

In times of plenty, a wealthy court can sustain all these offices and more. In times of privation, the most diligent seneschals find ways to economize. Perhaps heralds can take the role of counselors – not only telling us the news, but editorializing on it. Perhaps jesters can take the role of heralds, informing us who’s at court while entertaining us. And perhaps, in a state of emergency or an experimental mood, we can combine all three. 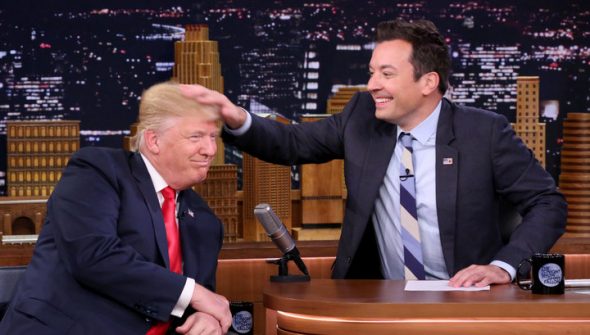 Days before the US Presidential election of 2016, Dave Chappelle defended Donald Trump against some of Hillary Clinton’s attacks, particularly regarding the infamous Access Hollywood tapes. Jimmy Fallon playfully tousled Trump’s hair while interviewing him. Following the outcome of the election, South Park creators Matt Stone and Trey Parker declared that they were laying off Trump, having run out of things to satirize. As white nationalists have seized Trump’s election as an opportunity to publicly rally, Tina Fey suggested that, instead of “screaming and violence,” counterprotestors might stay at home and eat cake. Trevor Noah called American antifa demonstrators “vegan ISIS“. Samantha Bee’s Full Frontal produced a video about hugging Nazis. James Corden kissed Sean Spicer.

I’ll cop to my own sociopolitics and say that I think all of these are dumb responses to the real terrors faced by many Americans. The people who have criticized Bee, Noah, Fey, Fallon, and others are spot-on. But why did we think better of them? Why did we believe, up until we were proven wrong, that comedians would have the solution? Why did we think humor was our best defense against power?

At its peak, The Daily Show with Jon Stewart averaged 2.5 million viewers a night. Cable news continued to gain purchase among the elderly, its slice of the demographic growing smaller and harder with every passing year. But millennials and Gen X got their news from Comedy Central.

One can understand why a man in his position wouldn’t want the duty to deliver the truth to millions of American voters. It’s a tremendous burden. But there are positive evaluations and normative evaluations. Jon Stewart may not have wanted to be the voice of a generation, but he was. The numbers back it up.

Jon Stewart retired in 2015, but others were already rising up to take his place. Stephen Colbert had already spun off his own show, a tongue-in-cheek satire of aggressive right-wing cable news. Samantha Bee debuted her own show, while Trevor Noah took Stewart’s place on TDS. Larry Wilmore had The Nightly Show all too briefly. John Oliver has found a home and critical acclaim on HBO.

Whether Stewart wants comedians to shoulder the responsibility of delivering the news or not, they are shouldering it.

Of course, laying this all at Jon Stewart’s feet is unfair. He’s hardly the first television comedian to breach the membrane between politics and entertainment. We might trace it back to Bill Clinton’s appearance on The Arsenio Hall Show, playing saxophone to an engaged crowd. We might go further, to Richard Nixon’s tone-deaf delivery of “sock it … to me?” on an episode of Laugh-In. Nancy Reagan appeared on Diff’rent Strokes to promote her “Just Say No” campaign in the War on Drugs, but she picked a sitcom rather than a primetime soap.

And yet there’s a difference between a politician appearing on a comedy and comedies addressing politicians. The former, for all its play at humanizing a lofty figure, is condescension. The statesman descends from their seat of power, chuckles with us, and then retreats. The “Feast of Fools” in Middle Ages Europe, where jesters took on cardinal vestments and burghers were brought low, was tolerated as long as it was because it only lasted a day. When those in power think there’s a genuine chance they’ll be forced to change places with the vulgar, they don’t tolerate it for a second. 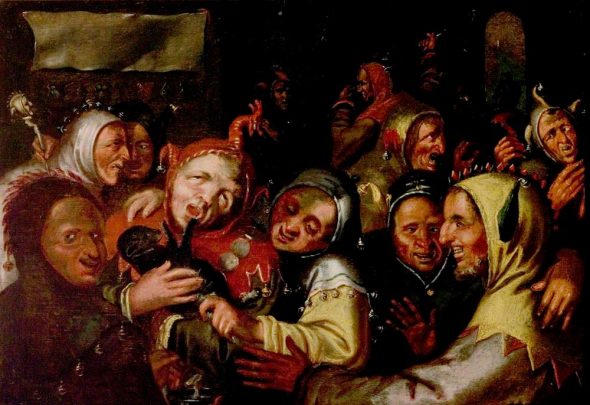 It says something of the power of comic television entertainment in the 21st Century that not only could comedians address politicians, but politicians felt inclined to respond.

This likely isn’t an original observation, but I think the power that comedy has lies in the term “absurd.” We use it in two very different contexts. When you hear someone saying, “That’s absurd,” it’s in one of two tones:

The emotional resonance is completely opposite. One is an amused acknowledgment; the other, a repulsion. But they’re both “absurd” – unreal, unnatural, deviations from the established order, Something Not To Be.

Consider a salesperson trying to upsell you on some trivial addition to your car. He might tell you, shrugging, that you need that TruCoat on your undercarriage or it’s in real danger of rusting away as soon as you drive off the lot. If you’re in a position of comfort – you don’t need a car urgently; you’ve investigated other offers – you might laugh this chiseling off. “That’s absurd!” If you’re in a position of vulnerability, you might argue strenuously: “That’s absurd!” But the reaction is fundamentally the same: disbelief, objection, refusal.

Humor is our defense against the unreal, the arbitrary, and the unnecessary. We don’t laugh at someone wasting away due to old age, or someone finding true love with their soulmate. We laugh at implausible scenarios. The husband coming home to find his wife in bed with a traveling salesman, to borrow a Borscht Belt staple, isn’t funny. The salesman or the wife trying to pass it off with some straight-faced excuse is.

Humor is a means of drawing boundaries. Anything outside the fence doesn’t belong or shouldn’t be. We mock the intruders to keep them at bay, or at least to strip off their disguises. Humor is a rebuke, not a bulwark; a push rather than a wall. It requires energy. It can suffer due to fatigue.

Most importantly, humor avails us little against forces that are already nestled deep within our boundaries. If the point of humor is to push an intruder to the edge of our circle and then cast them out, what do we do if the target is already in the center of the circle, and has been for generations?

The above is an awfully precocious reading of the role of humor in the social order. I probably couldn’t defend it if challenged. But I can’t think of another theory that addresses both the inability of professional American comedians to deal with the current Administration and the universal expectation that they should.

Humorists and cultural critics have long championed satire as an assault on the powerful. Italian playwright and Nobel laureate Dario Fo asserted that “power cannot stand humor, not even the rulers who call themselves democratic, because laughter frees man from his fears.” Satirists from Juvenal to Twain have taken up pens against the reigning hypocrisies of the day.

But, as we’ve seen, humor is also an integral part of existing cultural structures. Every culture on Earth, from the Xhosa to the Pueblo and the Angles in between, has well-defined rituals for mocking the sacred. Having men dress as women and take on female chores (as the Zulu did) or electing a disabled person bishop for a day (as in the Western “Feast of Fools”) reifies the hierarchy, rather than challenging it. It’s a pressure release valve. This sort of satire may offend the office-holders in power, but it doesn’t threaten them the way outside invaders or guerilla uprisings do.

Humor, again, is a means of enforcing boundaries. But it’s not as effective as policing what’s already within those boundaries. And when deployed in a country that’s made up of hundreds of polities with only partial overlap—coastal liberal urbanites, comfy suburban professionals, student agitators, the rural poor, the urban poor, migrants, the disenfranchised, a global elite whose wealth transcends nations—it’s easy to mistake the former for the latter.

Perhaps humor is more a pain reliever than a disinfectant, more balm than bomb. Humor observes and comments on the unreal – “that’s absurd!” – but there’s more to action than observation. Humor doesn’t have a view of a better world, or a policy program, or a rallying cry for action.

The liberal-ish entertainers of The Daily Show, Full Frontal, Last Week Tonight, et al have not ceased in their lampooning of the Trump administration or Republicans in Congress. But there seems to be a growing hunger for something more. Audiences are realizing that, if Trump is a break with the past (as is the consensus between progressive Democrats and traditionally conservative Republicans), then the same methods we used in the past will not counter him. They want more from humorists than the humorists can give.

Humor may afflict the powerful, but a laugh alone will not unseat them. 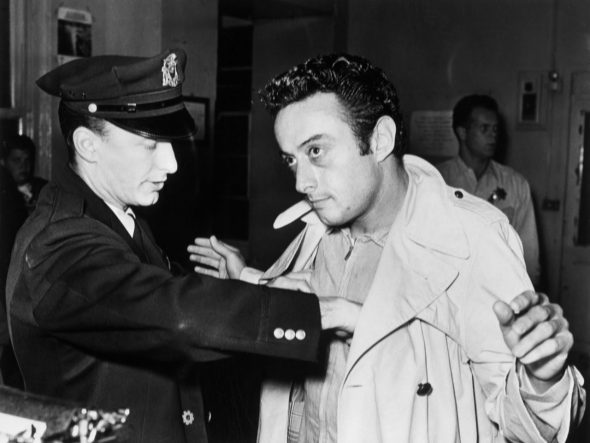 None of this should be taken to mean that humor is not essential. Of course humor is essential. So many things are essential. Food, water, and shelter are all essential but you wouldn’t say a starving person is healthy just because they have a roof over their heads.

If you find the present epoch afflicting, then you need humor to give you hope to go on. You need a room, virtual or real, full of people laughing at the same things you laugh at to convince you that you’re not alone, that you haven’t had a psychotic break with reality, that maybe it’s the facades and rituals that we call “reality” that are in error. You need that. You’re not wrong to seek it out.

But, depending on which slice of the West’s 99% you occupy, you need other things too. And Stephen Colbert, as smart as he is, may not be able to give them to you.

The comedians have failed us and we are adrift on a moonless sea. We have relied on jesters to tell us what is going on and how to feel about it, and to entertain us in the process. Now the jesters themselves don’t know. Now we’re all casting about for solutions, ducking the occasional thunderbolt from Olympus, and wondering what a “return to sanity” would look like.

“Maybe the problem is we elected a jester as President,” you’re about to type. I can see it. I can see your fingers glowing over the keys like the old Mavis Beacon Teaches Typing screen. Don’t. Save yourself from doing it. Acknowledge the bathetic impulse and then let it go. Humor is an essential survival mechanism in chaotic times but to make a limp attempt at humor in response to an analysis of the failure of humor to defend against chaos belittles the humor and the chaos both.