Overthinking It is celebrating our nation by searching for the most American piece of pop culture with the word “American” in the title. Read the entire series here.

he fourth and final region in our ongoing  ‘Merica Madness tournament is Capitalism. All of the entries in this bracket contend in one way or another with America’s fascination with the free market, both good and bad. On the one hand, we have lots tributes to the purported virtues of the market: competition, entrepreneurship, and innovation. On the other side, we have nearly an equal number of pieces of pop culture that highlight some of the more sinister elements of capitalism: greed, inequality, exploitation, and alienation.

Given this diversity of takes on American capitalism (with the word “American” in the title, of course), it should be no surprise that we have a crowded field that includes movies, TV shows, books, and music. In fact we actually two entries that have duplicates in different media. American Psycho started as a 1991 novel by Bret Easton Ellis, and then was turned into a movie starring Christian Bale nine years later. American Gangster is not only a 2007 biopic of the rise and fall of Harlem heroin kingpin Frank Lucas, it also inspired Jay-Z to write, record, and release a concept album inspired by (but not officially linked to) the film just a few weeks after the film premiered.

Rather than just stick with a joint entry for each of these pairs (or just eliminating two entries arbitrarily), I have decided to stick with the spirit of capitalism, and  let the forces of competition decide which incarnation of American Psycho and American Gangster deserve to enter the full tournament. The winners of this play-in round will move on to face-off against the History Channel reality series American Pickers and the Brad Paisley song “American Saturday Night, ” respectively. 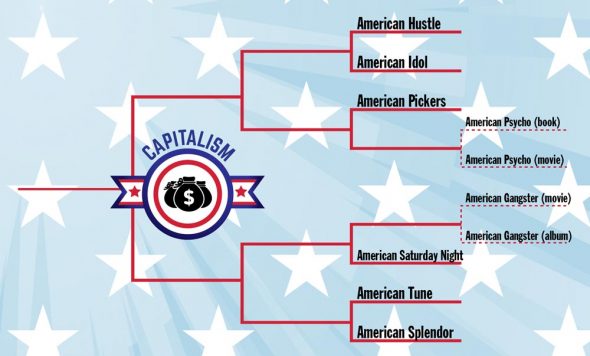 On the surface, Bret Easton Ellis’s American Psycho is nearly indistinguishable from the 1999 film that is based on it.  This could not be more appropriate— both the book and the film are largely focused on examining the nexus of commodification and dehumanization that are at the heart of late Reagan-era Wall Street. The book’s narrator, Patrick Bateman (portrayed by Christian Bale in the film) can identify the designer of every item of clothes of every person he meets and has strong opinions about the best brand of almost every high-end consumer product, but he often can’t actually tell one of his fellow investment-bankers apart from any of the hundreds of others that he runs into at countless lunches, nightclubs, and trips to the health club. Bateman himself is frequently mistaken for other members of his broader social circle— he kills his co-worker Paul Owen (Jared Leto’s character Paul Allen in the movie) who confuses him with nearly-identical investment banker Marcus Halberstram.

Although brand names are essential to determining value when assessing consumer goods that are essentially identical commodities, that same approach leads to a profound dehumanization when applied to relating to other humans. At the core of Bateman’s murderous spree are his complete lack of a sense of self-worth, and his related inability to see an intrinsic value in other people.  As both the book and film progress, Bateman’s ability to distinguish between reality and hallucination starts to unravel as well. Both the book and the film cast extreme doubt into the extent to which Bateman has actually committed the grisly acts that are depicted, or whether they are deranged fantasies, with the ultimate status of his crimes remaining ambiguous. 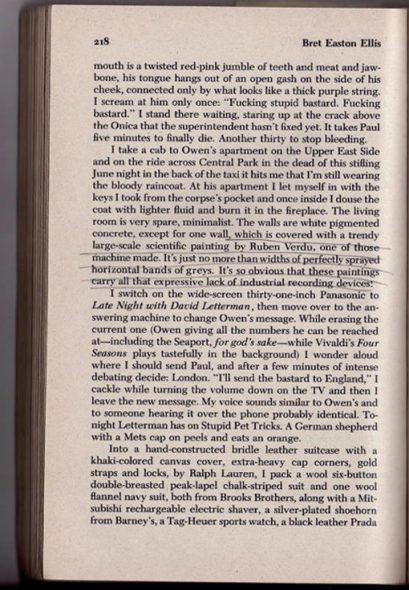 Where the two incarnations of American Psycho diverge is in the ways in which each medium is able to depict Bateman’s spiral of commodification and dehumanization. In the book, the key stylistic choice is Bateman’s first person narration itself.  From the first chapters onward, much of the narration is a flat, matter-of-fact listing of clothing designers, brand names, and restaurants. The effect of this stylistic choice is to create an impression of the world as a nearly meaningless parade of consumer products. Reading this for any length of time in one sitting starts to create the exact sense of anxiety and disorientation that starts to rapidly creep into Bateman’s narration, and is the fitting backdrop to the violent impulses and behaviors that start to interject, first causally, and then gradually taking over more and more of the narration. Even as the violent acts become more frequent and more graphic, Bateman’s fixation on the brands and details of the consumer products that he encounters remains constant.

In contrast, the strength of the film’s depiction of the alienating and dehumanizing elements of capitalism is in its ability to boil down the book’s satire of yuppie consumerist culture into short, instantly iconic scenes. Two scenes stand out in particular: the meeting in which Bateman and his coworkers compare business cards, and the scene in which Bateman delivers a lengthy analysis of Huey Lewis and the News’s oeuvre while preparing to split Paul Allen’s head open with an ax. These two scenes have a life in memes and gifs that extends far beyond the footprint of the movie— I had seen both dozens of times before I ever sat down and watched the movie from start to finish.  Both of these scenes are iconic in large part due to Bale’s pitch perfect performance, which manages to capture the essence of what makes Bateman’s narration so disturbing in the novel. Beyond these two scenes, the early parts of the movie work so well because Bale and the rest of the cast (with a heavy assist from the costume and production designers) deliver a pitch-perfect mockery of Wall Street that rings a bit truer than the analogous scenes in the novel.

However, as the film progresses, the thematic connection to the alienating effects of consumer capitalism starts to weaken as the bodies start to pile up.  Once Bateman murders Paul Allen in the film, the thematic connection to capitalism becomes weaker and weaker as the violence becomes more and more all-encompasing.  Although the latter portion of both the book and the movie start to move from one gruesome vignette to the next, the movie largely omits Bateman’s alienated litany of brands, while the book maintains this stream, cementing the connection between the dehumanizing elements of consumer capitalism and the trail of violence that Bateman blazes through Manhattan. Even though the movie is an endless source of Christian Bale memes, the novel is ultimately a more incisive look at capitalism (don’t worry, I still promise lots of Cristian Bale memes for as long as American Psycho is in the bracket). 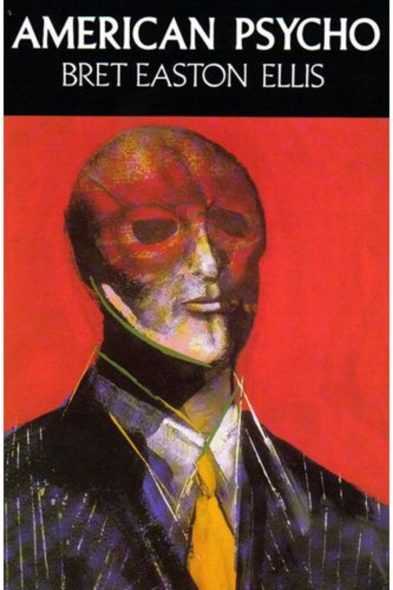 Although the Ridley Scott film American Gangster and Jay-Z’s album of the same name were released within a week of each other in November 2007, don’t be fooled— Jay-Z’s album is no soundtrack. Rather, Hov saw an advance screening of the film and was so moved by the similarities between the depiction of Frank Lucas’s rise through the drug game and his own beginnings selling drugs in Brooklyn that he hit the studio and recorded a concept album inspired by the film in just a few weeks, and had it finished in time to coincide with the release of the film. 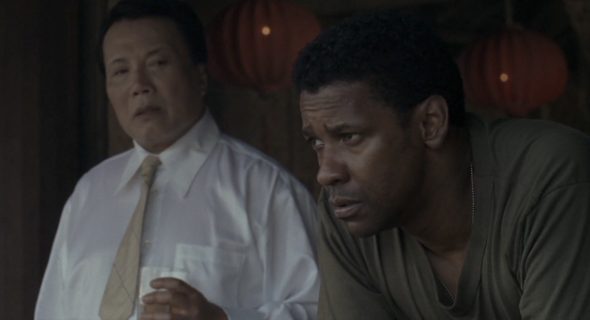 The film version of American Gangster’s broad narrative arc echoes many other crime stories in that it follows the rise of a drug kingpin and an eventual downfall that is due to in equal parts to hubris and the dogged investigative work of a rag-tag group of law enforcement officials. What makes American Gangster a unique depiction of American capitalism is the precise way in which it dramatizes Frank Lucas’s rise to dominance in Harlem’s drug trade (although this narrative is disputed by many of the people who actually interacted with Lucas in the 60s and 70s).  Early in the film, Lucas’s mentor, Bumpy Johnson, makes an offhand remark that chain retailers are wrecking the neighborhood, because their direct relationships with suppliers allow them to undercut mom and pop retailers. After Johnson dies, Lucas applies this wisdom to the drug trade by using his cousin-in-law in Vietnam to develop a direct supply of heroin. This connection allows him to sidestep the other major players in the New York drug trade (the Mafia and corrupt cops), allowing him to sell a product, Blue Magic, that is simultaneously more pure and lower-priced than anything else on the market. This is an ingenious trip on the notion of the disruptive entrepreneur that exists within our cultural imagination, and is precisely what makes the filmic incarnation of Lucas a quintessentially American Gangster. In addition, Lucas’s ingenious business innovation isn’t just an up-by-the-bootstraps narrative that ignores structures of inequality; rather the film intimates that the dense web of institutional racism that Lucas faces is exactly what pushes him to innovate, but is also partly what brings him down in the end.

Jay-Z’s American Gangster  is a concept album that roughly follows the same narrative beats as the film, constructing a mythology where Jay-Z’s combination of survival instinct, business acumen, and willingness to engage in risky illegal activities led him to make the most of a precarious economic situation to become a drug kingpin. Where Jay-Z ‘s narrative diverges from the film is that he mastered another entrepreneurial skill that Lucas never did: the pivot. Jay-Z’s own personal narrative of selling cocaine in 1980s Brooklyn parallel’s Lucas in 1970s Harlem precisely up to the point where Jay starts to shift from selling drugs to rapping. Throughout the album (as with much of his best work from throughout his career), Jay-Z makes the case that the same skill set that allowed him to succeed in the drug game allowed him to become one of the most commercially successful rappers of all time. At the same time, in the narrative of the album, Jay-Z also recognizes that if he hadn’t become a rapper, his story would have been more or less identical to Lucas’s.  If he hadn’t successfully pivoted into rap, I’d probably be watching a movie about him, rather than listening to his album on the streaming service that he owns. Frank Lucas may have invented the mold of the American Gangster. Jay-Z broke that mold, and sold us each of the pieces one-by-one. 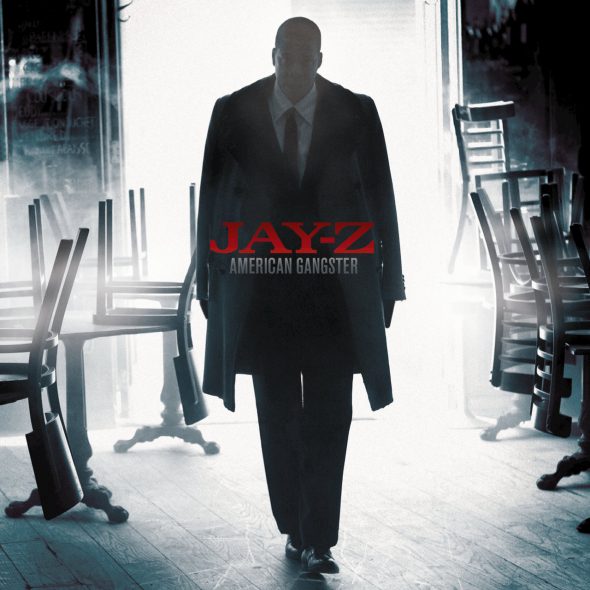 Now that these two play-in matches are done, we have our full bracket set for Thursday’s Capitalism round. 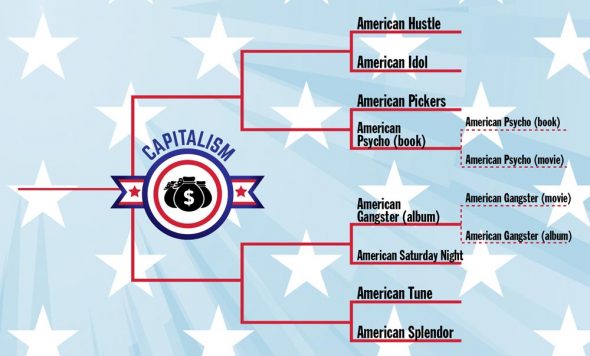 Come back on Thursday to find out what gets picked by the Invisible Hand (or at least by my two hands, which are invisible to all you out there on the internet). In the meantime, sound off in the comments with any other thoughts that you have on either of the versions of American Psycho or American Gangster!