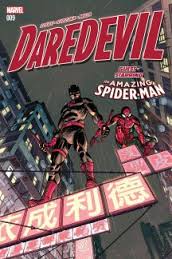 Charles Soule is still writing one of the best comics running right now. Even though I’m feeling skeptical about some of the story decisions that Marvel has been making in many of their more central books, they’re still producing some really amazing stuff at the same time, and Soule’s Daredevil is right at the front of that pack. This issue – Part 2 of the “Blind Man’s Bluff” storyline – had everything that a good superhero story should have: action and humor, as well as some thoughtful investigation of what it means to be human (through the metaphor, of course, of the superhuman).

Last issue, in a particularly James Bond kind of plan, Daredevil has travelled to Macau, ostensibly to take part in a superhigh stakes poker tournament; one of the other players is a telepath named Apex who’s secretly working for the casino to cheat by reading the minds of the other players and learn what cards everyone is holding so he’ll always know what move to make next. But since Daredevil is blind, and the cards are laminated, he actually has no idea what cards he’s holding in his hand, making Apex’s mind reading completely useless. Murdock plays solely by using his heightened senses to read the other players’ physical reactions – breath, heartbeat, all that stuff – and determine whether they’re holding good cards or bad ones that way. He ends up winning the tournament – ten million Hong Kong dollars (about $1.3 million USD) – but unfortunately the check is made out to the fake name he used to enter the tournament, so he can never cash it.

But that’s okay, because he only did all this so he could get a room in the ultimate-security penthouse of the casino’s hotel, so he can gain access to the floor where a bunch of Triads are keeping a leather attache case containing something very important.

Which brings us to this issue. This is where Spider-Man comes in.

Yes, Daredevil has invited Spider-Man to meet him in Macao and help him out with this mission. And Spidey, of course, would do almost anything for Daredevil – “one of [his] oldest and most trusted colleagues in the super hero biz.” Except that something’s not quite right, and Spider-Man knows it.

Besides playing off the contrast between Spidey and Daredevil – the former being more of a fun, wisecracking hero and the latter more of a dark and brooding type (especially now while Daredevil is, as Spidey mentions, “in a black-costume phase. Been there, pal”), bringing Daredevil and Spider-Man together this far outside of their primordial stomping grounds of New York City also works to highlight how alienated they’ve become from one another – how alienated Daredevil has become in general, since he did something to make his identity secret again, erasing it from the minds of everyone who ever knew it (except Foggy Nelson).

Because Spidey realizes that something’s different. “I have a lot of memories of adventures we’ve gone on over the years,” he says. “But they feel…incomplete. Like they aren’t the whole picture. Like a jigsaw puzzle with only half its pieces.”

And so Daredevil, of course, has to explain what happened: “Everyone used to know my identity, and I did something to change that.”

This is a brilliant move on the part of writer Charles Soule because it kills two birds with one stone: it acknowledges and defuses the potential objection on the reader’s part that Daredevil’s putting his public identity back in the box is exactly what happened in Spider-Man’s “One More Day” storyline back in 2007 while also dealing with some of the logical consequences of that act within the comics’ world itself. Certainly there are going to be a few glitches in the Matrix when people’s memories of Daredevil start having weird holes in them or inexplicable inconsistencies. Soule is an expert and knows exactly how to deliver plot advancement, character development, and philosophical investigation all at the same time while still keeping it fun and exciting. I know I keep saying this, but if you aren’t reading Daredevil, you aren’t reading the best ongoing superhero book of 2016.