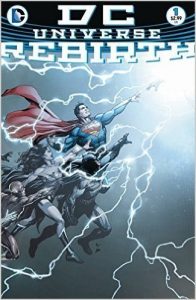 I’ve always been more of a Marvel kid. X-Men was my jam, and to a lesser extent Spider-Man and then a little later, Daredevil. DC Comics were harder for me to relate to, and that trend has mostly continued as I’ve got older…and older and older and oh God I’m probably going to die soon, aren’t I?

Anyway. Batman was the exception, of course, as he is wont to be. There was always Batman. And I frequently thought that Green Lantern was pretty rad. Lobo was always good for a laugh. And I liked The Flash too. I’ve kept sporadic tabs on all those characters as the years have gone by, but – again, besides Batman – I haven’t really read a lot of DC books for the past, like, couple of decades. It seemed to me that they were mostly rehashing the same kinds of stories, and when they weren’t doing that they were tearing up the status quo for no good reason, or periodically rebooting the entire universe over and over again, ostensibly to clean up the continuity snarls that inevitably accumulate and make the books more accessible to new readers, but it felt more like wiping out the stories and histories that we cared about, and I didn’t want to bother getting invested in stories that would only be cancelled a year or two later and treated as if they never even happened.

Since Crisis on Infinite Earths back in 1986, it seems as if DC’s catastrophic, universe-redefining events have been coming more and more often. There was Zero Hour in 1994, then Infinite Crisis leading into Final Crisis, which of course was not the final crisis because it was almost immediately followed by Flashpoint, which of course was the lead-in to what was loudly proclaimed on the cover of every DC book for the next four years as “THE NEW 52!” The Convergence, and now, at last…Rebirth.

I’m sure I missed some. But you get the idea.

What happened in Flashpoint was basically that Reverse-Flash had travelled back in time to kill The Flash’s mother, and when The Flash himself went back in time to prevent himself from being erased from the timestream he ended up screwing everything up instead, so when Flash then tries to put things back to normal he ends up merging all the various DC imprints together into a single universe, which became the New 52 – in which all the DC books were cancelled and restarted from #1, and the continuity was thrown forward in time so that the heroes only had about ten years of history rather than going on something like seventy-five years for some of them.

If none of that makes any sense to you…that’s because it doesn’t.

So anyway, it seems like now DC has realized that flushing all their hard-earned continuity down the toilet was not such a good idea and they’re now looking to undo it. That’s what Rebirth is. Wally West, one-time Kid Flash, who had then graduated to being The Flash before he was erased from history in the New 52 and replaced by his predecessor Barry Allen, forces himself back into the world from his barely-existent, uh, existence within the Speed Force, intent on telling DC’s heroes that their universe has been tampered with, that an entire decade has been erased – evidently as a plot by some nefarious extradimensional being or beings to weaken the heroes ahead of a presumed attack or invasion. These sentences hurt me as much to write as they’re hurting you to read, believe me.

Wally is in pain, too. Wally West is feeling our pain. The pain of readers who care about these characters and these stories and who don’t like getting jerked around so much and so often. And I include myself in that group – readers who care. Even though, like I said, I haven’t really been an active DC fan, I still – like a lot of people, maybe even like most people – know these characters, have affection for them, feel invested in their stories. Batman, of course. Always Batman. But Wally too. And Hal Jordan. They’re part of my life, part of my psyche, and I don’t like seeing violence done to them, to who they are, for the sake of – what, business?

So I think this Rebirth thing can be good. There’s something big and weird going on – something that evidently will do what Flashpoint did to Vertigo and Wildstorm, but to the Watchmen – and that’s a risky move. But Wally West is back. Action Comics and Detective Comics are being restored to their original numbering system, with #957 and #934 respectively, reversing the unconscionable expungement of almost a century of adventury.

Marvel is doing some of its best stuff ever these days – my two favourites of their current books, Daredevil and The Unbeatable Squirrel Girl , also both came out this week, sorry for not reviewing them, but they’re really good (they’re always really good) and you should be reading them, I certainly am going to continue reading them – but with the fallout from Secret Wars and now this genuinely offensive Captain America stunt, this is a good time for DC to be trying to win me over. So I’m going to check out what Wally and Hal are up to these days. And Bruce, of course. Always Bruce. I hope they’re hanging in there. I hope they’re doing well for themselves.

DC Comics are a buck cheaper than Marvel, too.

Recommended if you like this: The Flash by Geoff Johns, Book One