This year, we’re going to be putting our day-after observations about Game of Thrones into writing, in a series we call Game of Thrones Unlocked. In keeping with our tradition, these will focus on explicating one scene as an interpretive key for unlocking deeper interpretations of the episode’s themes. These articles will contain spoilers through the episode under discussion. This week, Ben Adams tackles “The Door” (S6 E5).

And in that sense, we the audience are in the same predicament as the characters we observe. The key to unlocking this episode is recognizing the different ways that characters are forced to resolve seemingly contradictory truths.

For instance, Dany must deal with the fact that Jorah is both a traitor to her cause and her greatest champion; he is her trusted advisor and also her biggest liability. In typical Danaerys fashion, she simply demands that the world bend to her will, to resolve the tension through magic: if Jorah is really as loyal as he says, he will heal himself, and the problem will be solved.

Tyrion, on the other hand, shows that he deals with contradictions by simply not resolving them at all. He papers over the seemingly unbridgeable gap between Varys and the Red Priestess by saying, “My friend has a healthy skepticism of religion, but we are all loyal supporters of the Queen.” In classic Tyrion fashion, there’s nothing wrong with some contradictions, as long as the job gets done.

And then there’s Ned Stark. When Ned’s father Rickard Stark sends him off to the Vale, he tells him, “Try not to get into any fights. But if you have to fight, win.” This statement is itself somewhat contradictory—it tells the young boy not to be violent, but at the same time insists that he should become really good at violence. The only way to resolve the tension is for Ned to subscribe to a rigid code of honor. Which works!

Sort of. Because while Ned Stark’s code of honor may have made him into the rare warrior with a conscience, it also lost him his head, as the mummer’s farce in Braavos shows. The contradiction here is how the satire both obscures and reveals the truth. Jester Ned Stark is a drunken, boisterous fool whose behavior could not be less like the dour, serious, and honorable Real Ned Stark. So the play is a lie. But at the same time, one can’t help but remember that it was Ned’s foolish devotion to honor that caused his own downfall. In the lie, we get some truth.

And speaking of the Starks, Sansa and Jon are finally off to take on the Bastard of Bolton. Here, Sansa is the one in an impossible, contradictory position. On one hand, we know that the Knights of the Vale may make the difference between victory and defeat in the wars ahead. But how could it be possible for Sansa to forgive his betrayal of her to Ramsay Bolton? 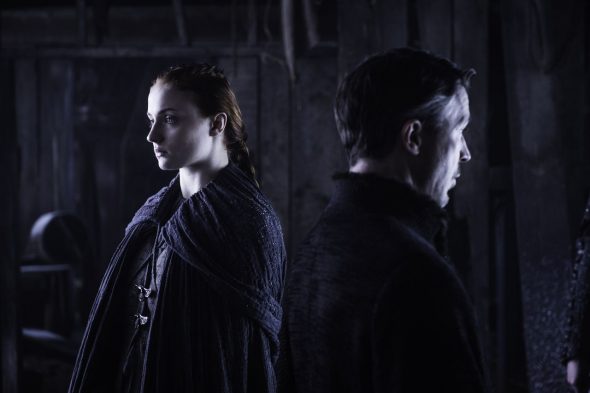 This scene was particularly intense because it’s the first time that Sansa has been able to confront one of her tormentors in a situation where she had the power. For five-and-a-half seasons, Sansa has consistently been in the power of others, subject to their whims. And now, finally, she gets have at least a little bit of power for herself: as she tells Littlefinger, she could have Brienne cut him down if she doesn’t like his answers.

So either Littlefinger is losing a step, or this is all part of a larger gambit. That’s why we should probably be skeptical of Littlefinger’s claim that Brynden the Blackfish is back in business and raising the Riverlords. Throughout the conversation, Littlefinger doesn’t really do any scheming at all; he mostly just takes it on the chin from a justifiably angry Sansa. If there’s something hidden here, it has to be in his “one last thing” about the Blackfish in the Riverlands. 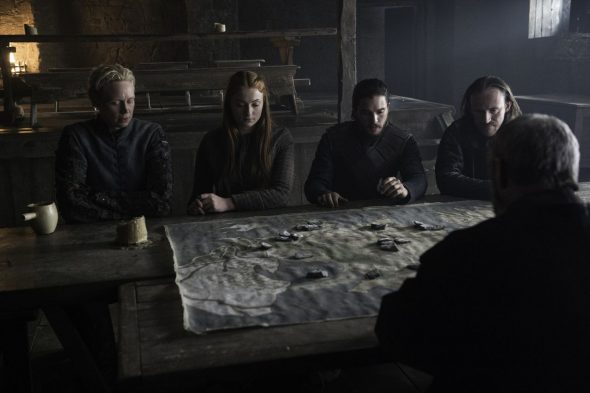 Which brings us to the final contradiction in this episode: the long odds faced by our favorite raised-from-the-dead-former-Lord-Commander. As he points out, he can’t defeat the Boltons to the South and the Others from the North. But he has to—it’s the only way to survive. So all he can do is take on one challenge at a time.

It’s hard at this point to see how that happens. Bran is on the run, and the Boltons seem more powerful than ever. Sometimes all we can do is hold the door. R.I.P. Hodor.