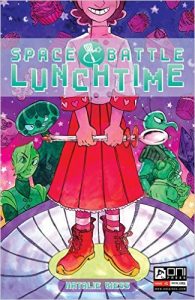 Space Battle Lunchtime is the name of a galactic cooking challenge reality show, and also the name of this comic about a dessert baker from Earth named Peony who gets recruited as a contestant when someone else drops out at the last minute. The precise degree to which humans are aware of the existence of aliens and things in this comic isn’t totally clear yet – Peony and her wonder whether the alien woman who comes into their bakery for coffees is wearing a frog costume, but when she asks Peony if she has what it takes to be the greatest chef in the galaxy, Peony’s answer is an unqualified “ABSOLUTELY.” While she later admits, once transported to the actual spaceship, that she “thought the galaxy was the theme – not the actual location,” and is all amazed at the technology and aliens she encounters, she doesn’t completely freak out and actually settles in pretty quickly.

Natalie Riess, writer and artist on the book, is also the force behind the webcomic Snarlbear, which I’ll admit I’d never heard of before I picked up Space Battle Lunchtime. And the reason that I picked up Space Battle Lunchtime, having never heard of Natalie Riess, is that the art is instantly and absolutely charming. Simple, clean character design and bright colours are wonderfully placed alongside some beautiful spacescapes (not enough of them if you ask me – they seriously look really really good). The concept of the book is simple enough – actually Futurama kind of already did it – but I can’t hold that against this book; every idea has been done before, after all, and nothing about this feels cliché. It almost seems like it could exist in a more all-ages corner of the Saga universe – and that’s a compliment, believe me. We don’t get very much information about the characters or the world, but I’m interested. Will Peony win the competition with the weird egg thing that is her mystery ingredient? What are the implications of being declared Top Culinary Artist in the star system, anyway? What can you buy with 20,000 solarbucks of prize money? I would like to find out! 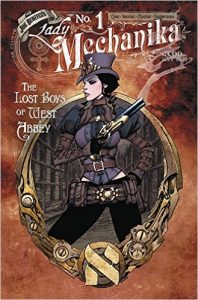 I’m a sucker for the whole steampunk thing, and also for Jewish-themed speculative fiction, so picking up this book seemed like a no-brainer. I didn’t know that it was the first issue of volume 3 of this series, but fortunately the story lets the reader enter without any prior knowledge required.

Set in Victorian/Edwardian England (because of course it is), Lady Mechanika follows its title character as she investigates the mysterious deaths of several street urchins who seem to have been the subject of cruel mechanical/mystical experiments. She has reason to believe that this might also shed some light on her own origins – although she has no memory of how it happened, years ago she awoke to find her arms and legs replaced with mechanical limbs. At the scene where the children’s bodies were discovered, she and the official Detective Inspector of Mechanika City discover several “clockwork dolls,” which we – although not yet they – understand to be some kind of mechanical golem.

The art and the atmosphere are really what makes me like this comic. The writing is fine, if a little by-the-numbers, but the level of detail in the environment and character designs is pretty great. Again, I’m a sucker for the whole steampunk aesthetic. And as we learn more about who this mysterious, kabbalistic murderer is as the series goes on, I’m looking forward to learning more about the world of Mechanika City and the character of Lady Mechanika herself.

Where to Start: Still here. Time commitment: Just this!
Recommended if you like this: Lady Mechanika Volume 1: The Mystery of the Mechanical Corpse 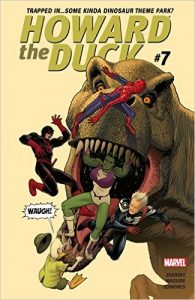 This is a classically weird and fun Marvel comic that kind of has everything: Spider-Man, She-Hulk, Daredevil, Captain America (Old Man Steve Rogers version), a tattooed pseudo-Skrull lady, the tropical Antarctic paradise known as The Savage Land, mind-controlled dinosaurs…oh yeah, and Howard the Duck!

What works so well in a comic like this one – which writer Chip Zdarsky seems to understand implicitly – is that Howard plays the perpetual straight-man. The talking humanoid duck, ultimately, is just this normal guy, you know? He hasn’t got any super powers, he’s not extraordinarily intelligent or skillful. In his home dimension he’s a completely ordinary person and it’s only the fact that he’s stuck in a world full of humans that makes him unique. The Marvel Universe is really a pretty insane place, and from Howard’s perspective it must seem like he’s the only normal one in the whole place.

Besides the fact that Zdarsky just appears to be effortlessly hilarious, in pretty much everything he does, he clearly gets that it’s the madness of the world around him that makes Howard so likeable and funny. So when you get to take these characters – and think about it, here we’ve got some of Marvel’s biggest and most iconic heroes all together in a one-shot comic story that isn’t part of a team book or some fifty-part crossover extravaganza – and give them Howard as the voice of reason who can point out exactly how absurd the stuff going on around him is, it adds an extra layer of entertainment on top of a story that would have been pretty damn entertaining on its own.

Where to Start: Howard the Duck #1 Time commitment: 6 issues
Recommended if you like this: Deadpool Volume 1: Dead Presidents