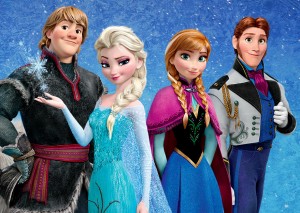 This movie. Everyone saw it.

At first glance, Frozen seems to follow Disney’s successful pattern of princess + magic + songs = box office gold. Yet as numerous thinkpieces have argued, the movie’s success is also due to the ways in which it breaks with the formulas of old. There are not one, but two princesses, and their sisterhood, not a romantic relationship, is the heart of the movie.

Beyond these widely recognized deviations from the Disney template, Frozen is also a subtle criticism of the institution of hereditary monarchy. Frozen depicts a dynastic crisis in the fictional country of Arendelle. While we never see most Disney princesses actually take the throne, Frozen focuses directly on the process of Princess Elsa becoming Queen of Arendelle. The death of Elsa and Anna’s parents, which leaves Elsa to inherit the throne, triggers a power vacuum that leaves the country susceptible to political threats from neighboring countries. The dangers only grow when Elsa’s magical snowbending abilities, long kept secret, are revealed to her kingdom at her coronation. By telling Elsa’s story, the movie shows us the weaknesses of a patriarchal monarchy, both politically and in how it treats individuals.

Over the course of Frozen, we see how patriarchal rules of succession have created a dynastic crisis and left Arendelle vulnerable politically. These rules are not spelled out by the film, but we get a few clues. The fairy tale which inspired the movie (“The Snow Queen”) was written by a Dane, Hans Christian Andersen, and the character names such as Olaf, Hans, and Kristoff suggest that the action takes place in Scandinavia. So I shall use the extant monarchies of Denmark, Norway, and Sweden to put together a picture of Arendelle’s succession and show the film’s critique of the monarchial institution. 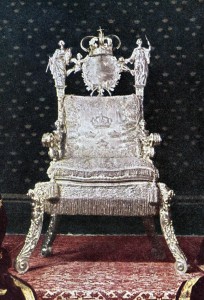 The Throne of Sweden, created for Queen Kristina, but probably not out of ice.

The King and Queen of Arendelle have two children, Elsa and Anna. Upon the death of the King and Queen, their eldest daughter, Elsa, takes the throne. Nothing in the film suggests that there was another king or queen between Elsa’s father and her own accession, meaning that Elsa inherited the throne directly from her father. What does this tell us about succession laws in this fictional kingdom? One possibility is that Arendelle operates by absolute primogeniture, in which case the oldest child inherits the throne, regardless of gender. The other possibility is male-preference cognatic primogeniture, in which an eldest daughter inherits only if there are no living brothers or male cousins.

There are examples of both of these types of succession in modern Scandinavian monarchies. Succession laws in Denmark, Sweden, and Norway all currently follow absolute primogeniture, and from 1971 to 1990, Norway used male-preference cognatic primogeniture. However, absolute primogeniture has been the law in Denmark and Sweden only since 1980, and since 1990 in Norway. During the period depicted in Frozen (which is likely the late 19th century, judging by the costumes and weaponry), most Scandinavian countries used agnatic primogeniture, which only allowed males to inherit. This does not seem to be the kind of rule in place in Arendelle, given that Elsa was able to inherit the throne at all. However, this additional historical context indicates that it is likely that Arendelle uses male-preference primogeniture rather than the more gender-egalitarian absolute primogeniture that currently exists in Scandinavia. In this case Elsa, a woman, is not the preferred type of ruler.

When a woman inherits in a male-preferring system, this is seen as a period of dynastic weakness. The reasons are as simple as they are sexist. The men who run the show doubt that women will be strong, physically or as rulers, or there wouldn’t be agnatic succession in the first place. Queen Elsa is styled “Your Majesty,” like her father, and receives his scepter and orb. But she does not get his crown; she receives a pretty, dinky tiara, which resembles the one her mother wore. This seems to imply that her rule is not on the same footing. 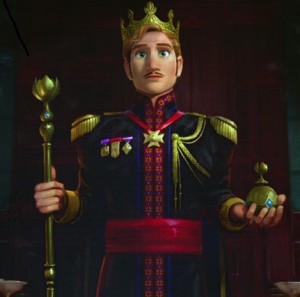 Elsa’s father’s coronation, showing off the real crown of Arendelle

On Coronation Day, opportunistic types arrive to take advantage of the monarchy’s perceived weakness. One of these is the Duke of Weselton, Arendelle’s closest trading partner. His goal is to “open these gates that I may unlock your secrets and exploit your riches.” His interest in more in trade than the queen, though he probably reasons that the best way to control the former is to get in with the latter. He shamelessly attempts to schmooze Elsa at the coronation ball. While he might have tried to ingratiate himself to a male monarch, I doubt he would have tried to so do by extolling his dancing talent over his head for business.

Another challenge for a female ruler in a male-preferring system is the loss of authority through marriage. There is the strong implication that the rule of jure uxoris applies in Arendelle. Jure uxoris is a fancy Latin term meaning “by right of wife.” It gives a husband everything that belongs to his wife, including lands and titles. This is one reason why some historical queens regnant, including Elizabeth I of England and Kristina of Sweden, chose not to marry, and why the marriage of Mary of England to the King of Spain caused such consternation. 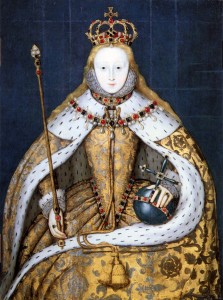 Jure uxoris is what another opportunist, Prince Hans of the Southern Isles, attempts to exploit. He woos the younger Princess Anna under false pretenses, and later explains to her in his “villain monologue” that as the youngest of thirteen brothers, “I knew I’d have to marry into the throne somewhere. As heir, Elsa was preferable, of course.” Hans seems to believe that he will become king, rather than simply prince-consort, if he marries the queen.

It’s hard out here for a prince.

Apparently, Hans’s plan would work in Arendelle, though it seems a bit inconsistent with real history. There have been a handful of kings by jure uxoris, though largely confined to Spain, France, and Portugal, not Northern Europe. Nothing like it seems to have happened historically in Scandinavia. Thus it seems unlikely that Hans could expect his own throne from this marriage. And yet, when he tells the foreign ambassadors that he married Anna before her death, the German Ambassador tells him, “Arendelle looks to you.” Hans then charges Elsa, in prison for being a magical monster, with treason. Even before he becomes the offical ruler, Hans has started to exercise his kingly duties.

So we’ve seen how the rules of succession in Arendelle have made this traditional kingdom vulnerable to external political threats. Yet this movie also shows us how the rules of monarchy can be damaging to individuals. From her childhood, Elsa is miserable because she is forced to hide her powers from the world. But she would probably be unhappy even without them, because of the accident of her birth. She is the eldest child and, absent brothers, the heir to the throne. This means that some things must happen and some things never can. Given that Arendelle appears to be governed by jus uxoris, Elsa would have to marry carefully, for political reasons. She would have to worry about a husband claiming her royal authority for his own, and might end up with someone safe whom she doesn’t love, a husband who would kill her for her throne, or no husband at all. Her personal needs and desires don’t enter into the discussion at all. So when Anna introduces Hans as her fiancé, Queen Elsa’s jealousy is palpable.

Elsa’s snowbending throws this society’s careful rules about power, succession and marriage out the window. It is terrifying to the men who benefit from this system. The Duke of Weselton wants Elsa destroyed for being a sorceress, and after she freezes all of Arendelle, Hans plans to execute her to bring back summer. In the end, Elsa learns to control her power and returns to the throne, but she doesn’t need any rules to tell her she’s queen. She has the power to destroy her enemy’s crops or bring their sea trade to a standstill. She is queen because she has power, real power, and the devil take the rules.

You try and tell her she can’t be Queen.

Of course, if that’s the end of the story, it could hardly be called anti-monarchial. But the message of the movie is that love and family trump any kind of rules or power. Elsa would have been a lousy queen if she couldn’t control her abilities. But the strength she gains from the love of her family does give her control. The movie posits that true love is about accepting people as they are and helping them be the best they can. The magical trolls even sing a number about it. Once people have the confidence to make their own good choices, they will. And though Elsa’s reign could be a tyranny, it doesn’t appear to be. The people love her and accept her as Queen. And if Monty Python has taught us anything, it’s that “supreme executive power derives from a mandate from the masses, not from some farcical aquatic ceremony.” The rules of monarchial succession that made such a mess in Arendelle are there to control families, without love. But love brings freedom. It’s not a stretch to see that this idea can be extended to everyone in the kingdom, and perhaps Elsa’s rule will be the beginning of a new political and social order in Arendelle.

Since 1937, Disney fairy tale movies have sold us on the idea of inherited monarchy. Snow White, Aurora, and Ariel are all princesses whose stories end happily when they marry princes. Cinderella and Belle are commoners who marry up. Since these movies end with the happy marriage, there’s no room to comment critically on the monarchial system itself. The same lack of reflection happens when princesses marry commoners. Tangled ends with Rapunzel engaged to the dashing thief, Flynn. Aladdin’s Princess Jasmine rebels a bit at being seen only as a conduit to her family’s power, but eventually gets the right to marry “whomever she deems worthy.” What happens to that power is never addressed. And Merida, the heroine of Brave, avoids the dreaded marriage to a lord chosen by her parents, but it seems that the marriage itself has merely been delayed, and at some point she will have to marry someone.

Elsa is not an ordinary princess. She is a queen with incredible powers, and as such, her story gives Disney its first real opportunity to examine how patriarchal inherited monarchy affects real people once the ceremonies are over and the fancy dresses have been put away. In the end, the message is that the system doesn’t work. It is politically dangerous, and it doesn’t respect the needs and desires of the individuals living within that system. Only when people have the freedom to be their best can they, and their land, flourish.

Jessica Lévai is a professor of mythology, folklore, and ancient Egypt. She dedicates this article to Ghanima, who may someday understand why mommy kept pausing Frozen and wouldn’t just “watch the movie without writing everything down.”