Tonight, #JackIsBack in 24: Live Another Day. But will it be the same? Do we want it to be? Will Jack Bauer’s return to television capture what we loved about the series? And what has our the insomniac been up to? To bridge the gap, we looked at IDW’s 24 Underground #1, the first comic in a five-issue arc that links the end of the old 24 with the beginning of the new. 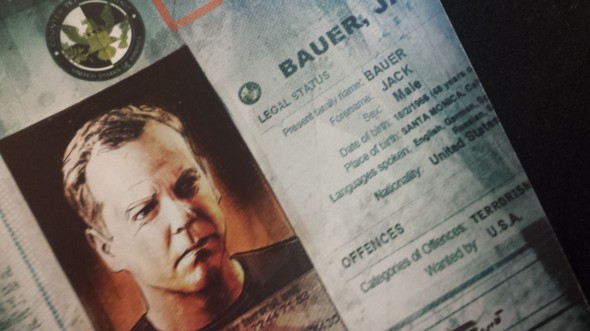 The Story So Far

At the end of Day 8 (what a civilian might call “Season 8” or “The End of the Show”), Jack Bauer busted up a corrupt peace deal between the United States and Russia, and President Taylor has agreed to resign and face punishment for her initially well-meaning, but ultimately murderous role  covering it all up. As a final act, the president has bought Jack enough time to flee the country before U.S. and Russian authorities track him down. Jack bids Chloe a bittersweet and heartfelt farewell and departs.

And then we know from DVD extras the Chloe was arrested some time later.

24 Underground might have started right there, with Jack evading capture, but instead it jumps the story forward to a situation very much like the beginning of Day 5 (That’s the one with the canisters of nerve gas, where Jack was dating the mom from Friday Night Lights and Samwise Gamgee played a bureaucrat with a heart of gold. It was pretty good, though I liked Day 3 better.).

So, Jack is living off the grid, under an alias, with a woman who adores him and kisses him and should immediately buy terrorist insurance. He seems, if not happy, then content. If only such things could last, but Jack Bauer is not on this Earth to be happy!!

While derivative, this isn’t the worst. Day 5 was the most popular season of 24. It’s the season that won the Emmy for Outstanding Drama Series, and got Kiefer his Outstanding Actor in a Lead Role statue. Taking some of the parts of its most popular stories makes sense. Besides, if your teeth grind at cliches, 24 is not dentist recommended.

Anyway, Jack soon finds himself mixed up in Ukranian organized crime, helping a distressed stevedore push back on the mob goons who killed his brother. From there, the plot thickens. 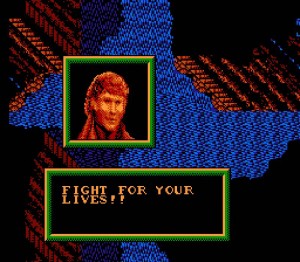 (And yes, they use Kiefer Sutherland’s actual face, to the extent that artist Michael Gaydos can reliably capture it in motion. This isn’t like the old Robin Hood: Prince of Thieves game for NES, where they licensed the movie, but didn’t license Kevin Costner, so it looked like you were playing as the keyboardist from Journey. An actual Good Drawing of Jack Bauer On the Cover is one of the big draws this comic brings to the table.)

If you ask me, Jack is a little too eager to jump back into trouble here — at this point Jack Bauer is the Christie Turlington of secret agents: he doesn’t get out of bed for less than a chemical weapons attack on a major city. Yes, if you have a web of deceit you can’t seem to untangle, Jack Bauer is the man to rip it apart. But does this web truly demand his attention? The only reason seems to be the personal relationships between his girlfriend and his casual acquaintances, which has never mattered all that much to him since his wife died back in Day 1.

And while I don’t doubt a complex knot exists, issue #1 doesn’t give Jack a good solid thread to hold onto. There is an unnamed shady character who wants methylamine (Hopefully a bald former teacher with a goatee and a porkpie hat, though it seems unlikely), but is he the real bad guy?

If this were old-school 24, it wouldn’t matter — he’d be bad enough for now, and we’d meet the actual bad guys later. But classic first-act 24 villains, while usually not the Big Bad, are bad enough to elicit sneers and rotten vegetables. This guy? Not so much.

Still, while things are a little slow to hit the fan, the issue leaves you at the point where you can sort of see the spinning blades up ahead — especially when that famous Sutherland mug gets caught on the wrong camera and a new player decides to crash Jack’s party.

We’re not much closer to London and 24: Live Another Day, but I guess that’s what the next four issues are for, and they’re not out yet. So that’s what we have for now.

It’s a cool style, but it doesn’t inspire the same feelings, and it doesn’t feel familiar to fans of the TV series. This comic did not scratch my 24 itch.

Jack Bauer is in these comics, and he’s the best reason to read them.

To his credit, writer Ed Brisson knows how to write Jack. The dialogue feels right, like an old leather jacket that might be a little too cool to don in public, but boy does it give a nostalgic thrill.

Jack doesn’t get to do all that much in issue #1 (he jacks a truck, but he doesn’t Jack any terrorists), but the way his voice imparts urgency and significance to a list of instructions never gets old (And you’re talking to somebody who recently binge-watched 5 seasons of 24 in two months. So if it got old, I’d know.).

The comic not in real time. There’s no ticking clock. There aren’t any parallel frames showing different action happening at the same time. The stakes at the beginning of this five-part run are very low, nothing like the kind of joyful absurdity you’ll find in “THE DEVICE” or “THE VIRUS” that tends to show up in a 24 season premiere, about 18 episodes before it’s revealed what is actually happening.

There also isn’t any Chloe, or Tony, or anybody else we recognize or care about. And I don’t just mean characters from the show — none of the new characters stand out. Nothing about them is specific or interesting. Nobody introduced matters… except Jack Bauer. And he only matters because we watched the television show.

This isn’t necessarily bad for crime comics in general. Vague identities without a specific person to care about is noir-ish, sure. But 24 was all about giving you people to care about as much as possible and then putting them in as extreme situations as you could manage. Not noir-ish at all.

One hopes more familiar faces — or faces that matter at all — will most likely show up later in the series. I mean, they have to, right?

It’s Not The Bauer in Your Jack, It’s the Jack in Your Bauer

24: Underground is an aspiring crime comic first, and a 24 sequel like eighth or ninth. In comics, where series are defined by the names of their main characters, it makes sense that the link to the franchise is the protagonist, not the kinds of stories they tell or the tools they use to tell them.

So, okay, I love 24, and I opened your comic. You have my attention. This is your opportunity. If you’re not relying on hitting the same moments as before, what are you doing to earn my continued attention?

The most interesting stylistic choice in 24 Underground I’ve encountered so far is color — the and black and white inks are washed in single hues, running across panel blocks that jump from page to page. The mood of a scene is the first thing you learn, before you even see the character’s faces, and the abrupt shifts from hue to hue jolt you from place to place or moment to moment.

In the best moment in the new issue, Jack Bauer takes a knife in the sort-of-gut from a party I will not disclose, and the instant flip of the whole world to red was a thrill. When Jack hurts, we all hurt. 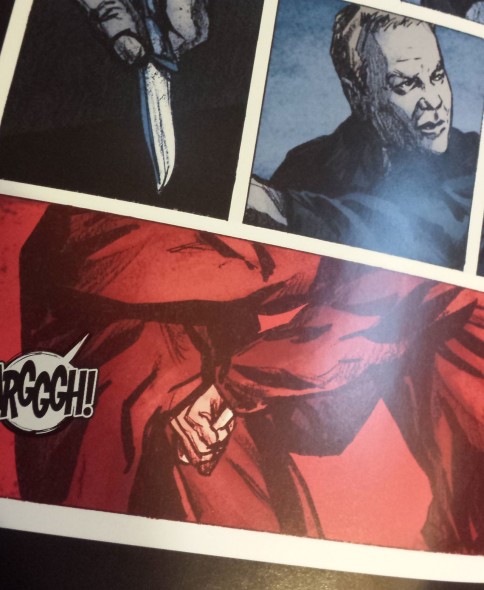 This seems analogous to the time-dependent thrills and melodramatic action suspense of the TV show, even if it’s a totally different device. It accomplishes some of the same things, and thus lives in a similar sort of world.

I hope later in the series this is used to more complex effect, because it’s a fun and interesting device. Though it is too gritty to feel that much like old 24. The pressure in 24 doesn’t abide grit; it creates diamonds.

Sadly, there doesn’t seem to be too much else gained from foregoing the television show’s visual trademarks. The panel design is flat and uninspiring. There is one gunshot in the beginning of the comic that is just so boringly portrayed in such a tone-deaf way (literally, “BLAM BLAM BLAM”), that I audibly sighed while reading it. If anyone had been there, I might have managed a heavy-hearted, breathy “Yeah…” in the style of Tony Almeida.

If only he were here.

Of course, tonight (Monday, May 5), he may very well come back, along with a whole bunch of other possible characters.

I know very little about what is planned for the 12-episode 24: Live Another Day relaunch. I haven’t seen any spoilers or leaked gossip, just the Super Bowl ads.

But 24: Underground at least raises the possibilities that you can:

There is a hint at a continuum here, where on one hand is a new 24 that enjoys and indulges in all the things that made 24 thrilling,hilarious and awesome, and on the other is something entirely new and also awesome, but in a different way that casts aside the show’s aesthetic.

There are also possibilities that it will just stink, but if that’s the case we won’t be talking about it in two weeks, so let’s lean on the anthropic principle and assume it’s going to be good.

What are your thoughts on 24: Underground in the context of the current political, diplomatic and military situation in and around the Crimea?

Don’t make me flip this table and grab your jacket by the lapels. Sound off in the comments!