As any film trivia buff can tell you, Alec Baldwin’s legendary speech in Glengarry Glen Ross does not exist in the David Mamet play of the same name. Mamet wrote it for the movie, to give a face and voice to an otherwise abstract enemy. Glengarry Glen Ross the play begins with Levene pleading with Williamson for the prime leads; the movie begins, after some brief establishing vignettes, with Blake berating the sales team.

The beauty of the speech, beyond its color and vitality and the shove off the docks that it gives to the narrative, is that it sets the story in a real world. Watching the play, one might innocently wonder why these button-down men are being so cruel and dishonest. With the added context of Blake’s speech, the reason becomes obvious: these men are on the verge of being fired. The play is a story of men behaving badly; the movie is a story of a milieu and what it makes men do.

I was reminded of this when watching the series premiere of Silicon Valley, Mike Judge’s HBO comedy about a cohort of struggling developers in Palo Alto, CA, who decide to start their own company. There are few sharper contrasts than sunny Northern California, with its spacious offices and colorful companies, versus the crowded, rainy streets of Brooklyn where Glengarry Glen Ross was filmed. Yet these two stories are fundamentally the same tale: desperate, greedy men convincing themselves they’re doing the right thing.

Both stories are kicked off by a provocative speech from a leading member of the industry. Blake’s speech, I’ve mentioned already. In Silicon Valley, it’s a speech by Peter Gregory at a TEDx spinoff. Peter Gregory is a Pétain a clef for venture capitalist Peter Thiel, with his plans to build an island utopia and his quest to get students to drop out of college.

PETER GREGORY: Gates. Ellison. Jobs. Dell. All dropped out of college. Silicon Valley is the cradle of innovation because of dropouts. College has become a cruel, expensive joke on the poor and the middle class that benefits only the perpetrators of it – the bloated administrators.

HECKLER: You are a dangerous man! Spewing ignorance!

GREGORY: I don’t think so. I’m just saying people should trust themselves more than a system that happily churns out unemployed debtors and provides dubious value.

HECKLER: The true value of a college education is intangible!

GREGORY: The true value of snake oil is intangible as well.

No one would mistake the casually dressed Gregory for the slick, tanned Blake, even on a foggy night at a hundred yards. But, stripped of institutional language and audience context, the tone and content are the same. You haven’t succeeded yet because you haven’t chosen to be successful, they say. Deny yourself the trappings of civil society (whether that’s taking a polite “no” at face value or completing a college degree) and follow your path boldly. And let the haters whiff on your exhaust.

Glengarry Glen Ross and Silicon Valley share a twisted notion of success, stated explicitly in each of the alpha dog’s speeches and then hinted at implicitly through the rest of the story. When you consider the abuse that the protagonists go through – humiliation, poverty, insane hours, poor culinary choices – you wonder who would be mad enough to stomach that life. “If you don’t like it,” Blake sneers at Aaronow, “leave.” Richard, inventor of PiedPiper and its compression algorithm, briefly considers giving up and moving back east, where rents are reasonable and jobs are slightly less crazy.

Why would anyone subject themselves to this torture if they didn’t have to? Why squat in an “incubator” with five other developers for a one-in-a-million shot at angel funding, when you could make a reasonable living as a developer in Chicago, Denver, Dallas, Atlanta, Boston, Charlotte, Seattle, or any of a vast number of cities where rent is more reasonable? Why alternate between the threat of termination and the humiliation of cold calls when you could get a job selling in any of a number of stable industries?

There are a pair of reasons, actually, intertwined and feeding off each other, and their commonality is telling. 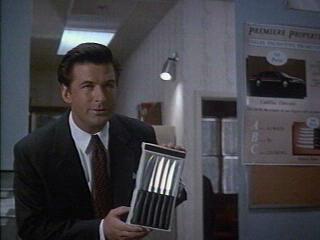 Your Series B funding? A set of steak knives.

The first reason is the challenge to masculinity, and the male insecurity that compels a response. “Are you gonna take [their money]?” Blake asks of the salesmen. “Are you man enough to take it?” Throw in a few of the common insults – “faggot,” “cocksucker” – and Blake strikes a nerve in the men: the desire to prove him wrong (by closing) or the desire to triumph over him (by stealing the Glengarry leads). The idea that a man ranting about how easy it is to sell real estate might be worth ignoring – the same way one would ignore a schizophrenic ranting on the subway – doesn’t enter their minds. These are men who can not let a challenge to their masculinity go unanswered.

The challenges become so frequent and so overpowering that the men internalize the language themselves, even as it makes them victims. “Who told you you could work with men?” Roma asks Williamson, after the office manager screws up a sale for the hot-shot closer. His tirade includes the usual epithets: “cunt”, “fairy”, et cetera. Levene, once he thinks he’s made a big sale, is equally cocky to Williamson: “A man is his job, and you are fucked at yours.” The taskmaster doesn’t need to hover over them with the lash; they’ll line themselves up at the first bell.

You might not think that the cloistered nerds of Silicon Valley would be subject to the same goads – “they’re smarter than that,” you might hope – but man, do I hate to disappoint you. It’s the guys lower on the social totem pole who desire the most to climb upward, rather than to step outside the status game. Note the spike-haired, tight-shirted brogrammers who mock Richard in E1 (“You been working out?”) to which he can mount no sharper comeback than “Ohh … you’re making fun of me.” Note the abuse which Ehrlich heaps on the residents of his incubator, and the eagerness with which they lap it up.

Most importantly, note the complete absence of women in this arrangement. You can’t incentivize a woman to work 70-hour weeks by challenging her masculinity, for reasons I shouldn’t have to spell out. Then again, I can’t imagine why a woman wouldn’t want to work for someone who makes analogies like this:

Your whole life, you’ve been an ugly chick. But now, suddenly, you’re a hot chick, with big tits and small nipples. So guys like that are going to keep coming around. Don’t be a slut, Richard.

This is Ehrlich’s inspirational speech to Richard in E2 (“The Cap Table”), just before introducing a stripper that he’s hired.

This casual, hypermasculine jockeying for power, whether in a strip mall office or a Palo Alto apartment, is the stick that keeps our protagonists from wandering. The carrot is the allure of easy money. “I can go out there tonight with the materials you’ve got and make myself fifteen thousand dollars,” says Blake. The allure of working on commission comes from the lack of a ceiling; since every sale makes the company money, the company can afford to offer you ten percent of every sale forever. Potentially infinite earnings!

Of course, for more ambitious operators, the commission isn’t enough. “Why take ten percent?” asks Moss, in trying to turn Aaronow on to the theft that precipitates the second half of Glengarry Glen Ross. “Why are we giving the rest away?” Moss sees the opportunity to go into business for himself, earning an even greater slice of an even larger pie.

But nobody in this arrangement is looking for a steady, predictable income – except Williamson, the office manager, butt of constant scorn.

Richard is similarly dazzled by wealth in Silicon Valley, even if he doesn’t seem the greedy type. He suffers a panic attack when forced to choose between selling his entire stake in PiedPiper for ten million, or taking a mere two hundred thousand and retaining control of the company – a potential payday of millions or billions more. It’s easy to understand that uncertainty, but it’s also easy to imagine a saner, milder person who’d be happy with either. Richard’s doctor puts the fear of madness and suicide in his head if he makes the wrong choice, but in what world is pocketing nine million dollars worth killing oneself?

The world of Silicon Valley, apparently, where two hundred million dollar deals go to douchebags like Javeed, whose vacuous house party (featuring a slumming Kid Rock) opens the series. Even Ehrlich comes off as a loser, sitting in his pajamas all day and slurping ramen, and he made millions off of Aviato. The implication is obvious: if these tools can make money, I know I can. Venture capital is lying in the streets, waiting to be scooped up.

We already know Glengarry Glen Ross is a tragedy, a brutal tale of men exploiting and being exploited by a system that will bleed them of all the labor they can offer and then cast them aside. And yet plenty of people in sales still take Blake’s speech, with its carrot and stick of easy money and challenges to masculinity, as an inspiration rather than a condemnation. Silicon Valley, despite the nature of its protagonists, is fashioned after the same pattern. Will aspirants to the ranks of tech billionaires take the same lessons?