GWAR is the band this wikia is dedicated to and also the creators of the human race and are also the destined destroyers of existence. 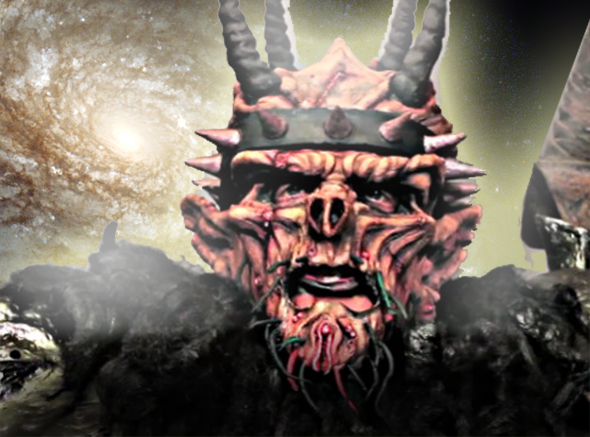 I first met Oderus Urungus 43 billion years ago, when he emerged from the Syntho Womb, reassembled from his previous parts. He was a new man who never talked much about his previous life.

He didn’t have many friends, unless you count the thrashing millions showering him with cloying adoration as they begged for mercy before he fed them to dinosaurs. And his Cuttlefish, of course. But you could tell he valued his fresh start.

I next met Oderus on the planet Ennui, when he went with Balsac the Jaws of Death to visit his family when his mother was sick. Oderus would never say he was ever there for anyone, but that spaceship was always there, before Flattus Maximus stole it, anyway. There was a reason Balsac’s bear trap face tended to smile with a little more contentment when Oderus was around.

I know it’s hard to tell love from other feelings with all those bodily fluids and severed limbs flying around, but there was love among the Scumdogs of the Universe.

I briefly exchanged words with Oderus when the Master first exiled him to Earth, before he was frozen in the Antarctic ice, well before the origin of the human race. He was grouchy, but faced it with his characteristic dry-heaving wit. That was when he had first had sex with that ape, which then gave birth to the progenitors of the human race.

He has always framed it as a regrettable act of cruelty, creating people — always saying how we fell so short of his expectations, of how we could never be the army he needed to defeat Techno Destructo or Sawborg or whatever problem he happened to deal with in the moment. But isn’t that a way parents can be? Don’t we kind of love them for it? That they push us to be better, even though they could be so much better themselves?

The centuries frozen didn’t slow down Oderus much. I saw him in the 1980s, after Sleazy Martini had signed GWAR to that first contract, when he was first getting famous with the descendents of his offspring who were so beneath him all the time. The hatred was there, but there was something else, too. Joy, I think.

And of course, like everyone else, I saw him on Beavis and Butthead, and in Empire Records. Those days. I mean, Oderus was already 43 billion years old, but were we ever so young?

I only ever saw one GWAR show live — at Toad’s Place in New Haven in 2002. I was there in the company of several other Overthinkers-to-be — though the site was not yet a speck of Jizmaglobin in our own Cthulhulian cuttlefish.

I remember Belinkie accepting a bet to wear an N*Sync hat, only to move it to his elbow when he was punched in the back of the head for it. I remember a blazing red neon sign — “GWAR” one of the boldest words there ever was — above the stage. I remember the full-throttled, full-throated shouts of the crowd, in unison — “GWAR!” “GWAR!” “GWAR!”

And I remember Oderus taking the stage, and the room flooding him in cheers.

“IF I WANTED YOUR APPROVAL,” he said, “I WOULD BEAT IT OUT OF YOU!”

What followed was hours of relentless assault. Blood, semen, all manner of simulated obscenity poured out on the stage and into the crowd. Mike Tyson in puppet form bled to death after his hands were chopped up. The pope was cut in half and fed to a full-sized dinosaur. In a particularly timely and appreciated moment in 2002, Osama Bin Laden was disemboweled, and Oderus used his intestines as a jump rope.

And I remember at one point a song ending in brutal, deafening silence. The crowd was too beaten by all of it to even cheer. GWAR had done what it has always done — achieve a further extent than even “ad absurdam” by absorbing and transcending absurdity itself. Language failed us. Time failed us. In that context, maybe Oderus was 43 billion years old — more than three times older than the universe itself. Maybe there were Scumdogs in the stars.

And in that silence, one voice, softer, sadder, spoke.

“What, no clap? A little clappy?” said Oderus. “Come on. Our egos are fragile.”

That vulnerability is what stood with me. That understanding of fragility, even among the most brutal performance I had ever experienced — perhaps the most brutal thing I had seen or heard, period. I felt like I understood GWAR in that moment better than I ever thought I could — not that they needed approval, but that they knew strength, and they knew weakness.

They knew what it took to break people and things, and they also knew what it felt like to be at least a little broken. Or maybe a lot broken.

Anyway, I didn’t see much of Oderus after that. I had been hit by the full force of his own Jizmaglobin, and I could hardly stand it again. That was 12 years ago. More than a decade of screaming and raging guitar solos and various public- and private-sector officials cut in half and fed to dinosaurs. A blink of an eye to a Scumdog.

Then on Sunday, Dave Brockie died in his home in Richmond, Virginia.

And for a deafened moment, the universe was silent.