Welcome back, Overthinkers! In our last mind-melting episode, we discussed the use of mental illness as a trope in popular culture, focusing specifically on Multiple Personality Disorder in the novel/movie Fight Club, and in the character of Legion from Marvel’s X-Men comics.

Today (or whenever you’re reading this…although I guess that would also be “today” for you even if you are reading this IN THE FUTURE!) let’s look at some other stuff!

So there are these two sitcoms. One is network television’s most popular comedy, and the other is a cult favourite rife with network drama and constantly on the edge of cancellation. And they both feature, as their most beloved character, young men who are portrayed as being…not quite right. I refer, of course, to Family Matters and ALF. 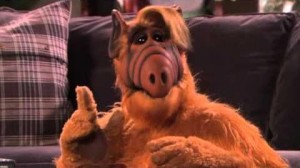 No, just kidding. Obviously I mean The Big Bang Theory and Community. Dr. Sheldon Cooper of Big Bang is a scientific genius, vastly socially inept, asexual, and a major science fiction and fantasy nerd. Community’s Abed Nadir is utterly obsessed with pop-culture to the exclusion of almost everything else, displays very low affect and difficulty recognizing social cues, but is fun-loving and often displays a childlike sweetness. The thing about both Sheldon and Abed is that they are characterized—though never explicitly described—as having Asperger Syndrome, or at least being somewhere along what’s known as the autism spectrum.

The fact that it’s never actually stated that these two characters have any clinically specific disorders is somewhat important. In contrast with Legion, say, who had been variously described as suffering from Schizophrenia, Autism, and most recently Multiple Personality Disorder, having no official diagnosis frees the shows’ creators a bit from any criticism from those in the mental health profession or those who actually live with these conditions. If anyone objects, “people with Asperger’s don’t act like that!” the writers can respond, “We never said he had Asperger’s.”  As far as I can recall, the closest that Abed has ever got to being identified is in an episode of the controversial and Dan Harmon-less fourth season where his email buddy from Europe comes to visit and refers to “neurotypicals,” a colloquial term for people who are not on the autism spectrum. Abed looks at the guy rather askance both times that he uses the word, but doesn’t take it on directly. The implication is clear that the other guy identifies as being somewhere on the spectrum, and (much like many viewers do) assumes that Abed is as well, but Abed never describes himself this way. Similarly in the case of Sheldon, the closest we get to a diagnosis is whenever someone accuses him of being “crazy.” His standard response is, “I’m not crazy; my mom had me tested.” The show’s writers have taken on the autism questions by explaining that since in the show’s reality Sheldon never received a solid diagnosis of any condition, the writers don’t have one either. In the case of both Abed and Sheldon, while they behave in ways that certainly can easily be seen as largely consistent with autism in general or Asperger’s in particular, Sheldon is written as Sheldon and Abed is written as Abed, not as any specific mental health condition. 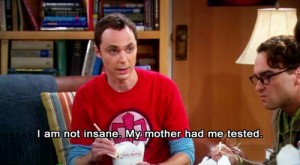 Now, while that affords the shows a certain degree of protection against accusations of making light of mental illness, it’s in a fairly major sense nit-picking. Audiences wouldn’t so consistently and easily leap to the assumption that these characters were on the spectrum if they didn’t display some pretty typical (or stereotypical) symptoms. So I’d say it’s not unreasonable to treat Abed and Sheldon as if the characters are on the spectrum, and examine what autism/Asperger’s symbolizes in these two characters. Which is: the inability to deal with the unstructured and emotionally messy realities of, uh, reality.

Both Abed and Sheldon are addicted to patterns. In Sheldon’s case this manifests in his self-admittedly Spock-like devotion to logic over emotion, and his obsessively scientific mindset that sorts and ranks every element of life into distinctive categories—including collecting and organizing physical objects such as comic books, but also specifying things like the number of times he must knock on someone’s door to gain entrance, his dinner order on Thursday night, or his place on the couch, and if any of Sheldon’s preferences are violated he becomes extremely agitated and uncomfortable (this is played for laughs). These kinds of repetitive activities and inflexible habits are some characteristic symptoms of Asperger’s. In Abed’s case, his primary frame of reference for interacting with the world is through the tropes of media (mostly television and movies). Because of Abed’s tendency to view everything through the lens of media, Community often functions as a kind of meta-sitcom; Abed’s genre awareness, where he acts as if he and his friends from community college are characters in a sitcom about a group of friends at a community college, lets Community comment on sitcom tropes and clichés while at the same time subverting them. It also lets the show play with structure and parody with genre homages and movie references woven right into various episodes’ plots.

As a matter of fact, at one point in an episode from the second season, the study group’s unofficial leader, Jeff Winger, mockingly accuses Abed of living by a “cutesy ‘I-can’t-tell-life-from-TV gimmick.” Abed responds with a very self-aware and forthright, “I can tell life from TV, Jeff. TV makes sense, it has structure, logic, rules and likeable leading men. In life we have this. We have you.” For both Abed and Sheldon, their extremely sensitive natures (which the shows attribute culturally to nerds) privileges the familiar and well-understood tropes of popular culture to the overwhelming uncertainty of real life, and a constellation of symptoms typically associated with Asperger’s serves as the engine of that metaphor. 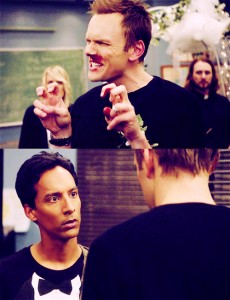 The videogame Psychonauts, from game studio Double Fine Productions, takes a much more classically Freudian attitude toward mental illness and psychology in general. The player character, Raz, is an especially talented psychic who goes to a summer camp for children with unusual mental abilities, where they learn to control their powers and also go canoeing and stuff. Raz can travel into the minds of many of the various characters he meets, and by navigating through their internalized traumas and caricatured memories, he not only learns about what makes them tick, but can actually fix their psychological problems by completing quests, defeating their inner demons, cleaning up literalized mental cobwebs and anthropomorphized emotional baggage.

Interestingly, even though Psychonauts appears to adopt an outdated idea of the motivations for people’s behavior and the constitution of the psyche, wherein a single event from a person’s troubled childhood can be the one factor that informs their entire personality from that moment forward, to the point that, for instance, winning a chess game is all that’s required to heal someone who’s convinced that he’s Napoleon, Psychonauts also complicates this by showing us that even the most seemingly well-adjusted characters in the game have deep-seated traumas locked away that continue to haunt them. Psychonauts doesn’t operate from a scientific style of diagnosis-based description of mental illness at all, but treats the mental world as a literal, albeit metaphysical, realm that can be lived in, manipulated, and broken or repaired on its own metaphorical terms. A character’s emotional baggage here can be an actual suitcase except it’s got googly eyes and is weeping uncontrollably, and if you reunite it with its missing luggage tag they both rejoice and you’ve solved that particular psychological problem.

This sort of treatment would not work on Sheldon Cooper. 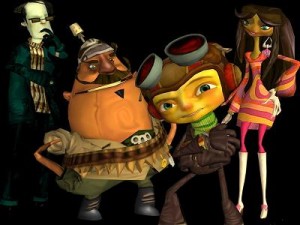 In Part One, in discussing pop cultural depictions of Multiple Personality Disorder, what I didn’t mention is that there are a great many professionals who doubt that MPD is even a real thing. It’s certainly a very rare condition, and there is often a contention that the few patients who have been diagnosed with it are actually just faking it to get attention, and/or their doctors are inventing it in order to get famous. That’s either crass and insulting to the actual people suffering from the condition and the professionals trying to help them—if it’s real—or else it’s dismissive of them as posers trying to capitalize on the sympathy they perceive that people with mental health issues receive in our society, or at least the sympathy to which they feel entitled.

Does using mental illness as a metaphor do something similar? Does it objectify the real people who actually have these conditions as part of their identity? Or is it legitimate to take an illness as symbolic for a wider cultural or existential investigation—certainly tuberculosis was a popular trope for this very thing not unreasonably long ago. Should we be wary about portraying a real mental illness in art if we’re not doing it in order to actually understand the condition itself and the actual people who live with it? Or is it inherently impossible to divorce an artistic subject from its broader figurative consequences, so that worrying about it too much is rendered senseless? 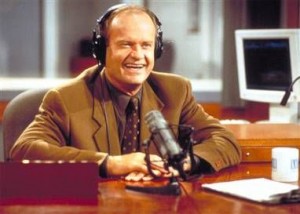 This is Frasier Crane saying goodbye, and good mental health.

19 Comments on “The Mind is the Medium: Mental Illness in Pop Culture, Part 2”