In The Dark Knight Rises, Bruce Wayne has romantic relationships with two ladies: Wayne Enterprises board member Miranda Tate and cat burglar Selina Kyle. The first one kicks off, and is consummated, in the first act. Miranda finds Bruce outside his manor. The power having recently been shut off, the two of them make love in the dark, then cuddle in front of a roaring fire.

Then I stopped myself. Just how many women has Bruce Wayne slept with? 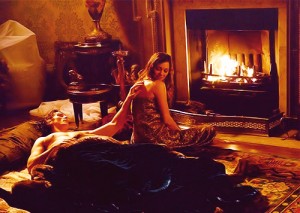 Midway through The Dark Knight, Rachel Dawes shows up at Bruce’s penthouse while the Joker inflicts chaos on Gotham City. He tells her that he’s going to turn himself in, but she pleads with him not to do so just for her sake. The two of them kiss.

… but do they sleep together? Rachel clearly stays the night: she’s watching the press conference on Bruce’s TV the next morning and gives Alfred a note for Master Wayne. But we don’t see anything that suggests that Bruce “visited the Batcave.” We also have plenty of reason to suspect that they wouldn’t have had sex: Rachel’s known Bruce for too long to have a one-night stand with him; she still has feelings for Harvey; etc.

Well, so what? The Dark Knight is PG-13; they can’t show any good stuff. But the MPAA rating alone shouldn’t be a bar. Consider Tony Stark, as depicted in the Iron Man movies. He sleeps with Vanity Fair reporter Christine Everhart in the first movie. While we don’t see anything explicit, it’s clear what happens. Consider also the James Bond series. These movies always make sure you know, with no mistake, just how many women Bond has slept with and when he’s slept with them (right after killing someone; right before killing someone; in lieu of killing someone; etc).

If Chris Nolan wanted to show Bruce Wayne enjoying an intimate moment with a lady in a PG-13 movie, he could find a way. He did exactly that in The Dark Knight Rises, but not in any of the prior movies. This forces us to ask: why not? What does this say about the Batman character?

Consider what we know about the history of Bruce Wayne. He loses his parents to a mugging gone awry at a very early age. When he has enough money and freedom to travel alone, he sets off around the world, studying the ways of criminals and the fighting arts. He pursues this craft with monastic devotion and little humor. There’s certainly a chance he could be picking up local girls in the Shanghai underworld, but it doesn’t really match what we know about the character.

Once Bruce returns to Gotham City, he adopts the appearance of a billionaire playboy. We see him with a long, anonymous string of gorgeous ladies – Brazilian models, Russian ballerinas, and the like. But these appearances are always brief and always in public. Whenever Bruce is at home, he’s studying crime scene footage, dressing in a bulletproof bat costume, or brooding. His sojourns with the ladies are part of his disguise. They’re not romantic, and Bruce is either too much of a gentleman or too preoccupied to take advantage of their attraction to him.

One could argue that Bruce Wayne doesn’t have a lot of romances because he has trouble relating to women. He’s a monomaniac, shaping every aspect of his life toward his pursuit of criminals. While this reading jives with how Bruce is depicted in the Nolan films, it doesn’t ring true. A man doesn’t need to relate to women in order to seduce them (some assholes insist it helps their chances). While Bruce doesn’t strike us as the love-em-and-leave-em type – thankfully, since it’s unheroic behavior – we wouldn’t be surprised if he used his billions to live that way. But he doesn’t.

In fact, given the efforts that Bruce goes through to maintain the persona of “Bruce Wayne, irresponsible playboy,” it would have to be harder not to sleep with these women than to sleep with them. What are we to imagine? Bruce rents out the dancefloor of Gotham’s hottest nightclub, packs it with supermodels, leaves with one in a flurry of paparazzi flashbulbs, then . . . drops her back at her hotel? Word must get out. And yet this is the life that we must presume Bruce leads, since Nolan would depict Bruce bed-hopping if he wanted us to think otherwise.

Christopher Nolan doesn’t want us to think of Bruce Wayne as a sexual creature. Why? 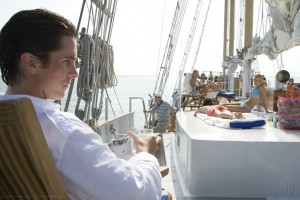 (I’m focusing on Bruce Wayne as depicted in the movies here, not in the comics. Bruce Wayne the comic book character has undergone several canonical revisions in the history of DC. It’s hard to say anything definitive about him other than (1) his parents are dead; (2) he’s a billionaire; (3) he dresses up like a bat. Besides, the comics storylines that have focused on how much action Bruce Wayne is getting have tended to be among the worst entries)

I don’t want to dwell on all the sex Bruce Wayne isn’t having in prurient detail, but it’s noteworthy if you place him among the pantheon of 20th/21st century action heroes, as Nolan’s blockbuster films have. There’s an unspoken understanding that a male action hero, as a means of demonstrating his virility, will have sexytimes with a desirable female. This has been true of North by Northwest, Lethal Weapon II, Cobra, Indiana Jones and the Last Crusade, Braveheart, The Last of the Mohicans, Starship Troopers, Kick-Ass, Road House, Money Train, The Transporter, Striking Distance, The Bourne Identity, The Getaway (either version) … and so on, and so on.

The difference between those heroes and Batman, however, is that for most of those heroes the fight is personal. A man is betrayed by his employers, or loses his family, or is hunted by a determined enemy, and seeks revenge. We identify with him because he’s been wronged and we feel the slight in turn. In the Nolan movies, however, Batman doesn’t begin his crimefighting ordeal until after his parents’ murderer has been killed. His desire to fight evil arises not from personal affront but from a code.

The code of chivalry, as practiced in Western Europe, has no definitive text. It was a broad term, used by a variety of different authors – Guillaume de Loris, Jean de Meun, Christine de Pisan – to encompass knightly behavior. The general thrust was that a knight had a duty to protect the lower social classes and those who were martially weaker, to be faithful to God, and to treat ladies with courtesy. Real-life knights rarely lived up to this example, even though several civil and liturgical efforts – like the 10th century synodical Pax Dei movement – tried to enforce it. Chivalry was invented by storytellers, but then again, so was Batman.

Batman, as depicted in the Nolan films, lives by a very strict code. He won’t deliberately kill someone. He won’t set aside the mantle of The Batman until it becomes necessary to protect the city (as a scapegoat for Harvey Dent’s murder). Does the Dark Knight’s code extend to romance, as does the code of chivalry?

Or maybe it’s not a chivalrous code but a monastic discipline. Bruce denies himself the pleasures of the flesh in order to hone his fighting prowess and crimefighting acuity. It’s telling that, in The Dark Knight Rises, Bruce hooks up with Miranda shortly before going after Bane and losing. There may not be a Samson-esque connection between succumbing to a woman’s temptations and losing one’s strength, but perhaps it’s merely indicative of how far Bruce has fallen from his ascetic ideal.

Bruce Wayne has this in common with his inspiration: Doc Savage, the Man of Bronze. One of the early heroes of pulp fiction, Clark “Doc” Savage was a crimefighter, surgeon, scientist, pilot, and master of martial arts. Equipped with gadgets far beyond the capabilities of the time – the 1930s – he and his team of associates devoted their vast fortune to ridding the world of evildoers. But Savage never took a lover.

In his first adventure, “The Man of Bronze,” he gently puts aside the daughter of a Mayan chieftain who has fallen in love with him. In a later novel, “The Fortress of Solitude,” he rescues a cute girl from a kidnapping. The author goes into almost ridiculous detail describing how attractive this young woman is:

Fifi had the cutest form of any small girl Doc had ever seen. Short girls are usually spread out a bit.

[Doc] got down to the alley, got his car around there, got his passengers loaded into it without attracting anyone’s attention. He drove toward his headquarters.

Fifi slipped over and her head rested against his shoulder. She was the type of little thing that could look delicious when she was sleeping.

Several of Doc’s legendary assistants comment on how cute Fifi is at various points. From Doc, not a word.

Is a life of monastic detachment required of superheroes? In order to defend civilization – the trade of all costumed crimefighters – a hero must live a life apart. He wears a mask and changes his name to remove his identity. He devotes every free hour to the mastery of his craft – Doc Savage to his scientific techniques; Batman to the martial arts and the criminal underworld. But the temptation of the “real world” must weigh heavy on the hero’s mind. It nearly sways Bruce in The Dark Knight, when he promises to give up being Batman if Rachel will live with him. So to free himself of those temptations, he follows an unyielding code.

Bruce Wayne, of course, probably isn’t a virgin. It’d be a little silly to think that Miranda Tate is the first woman he sleeps with. But, in Nolan’s eyes, we’re not meant to think of him as a sexual creature. If he has a sex life, it’s off-screen, unremarkable, and inconsequential to his heroics. In that way, Batman diverges from the 20th century notion of action movie heroism. It’s his devotion to a chivalric ideal, rather than his hypercompetency or raw power, that make him a hero. 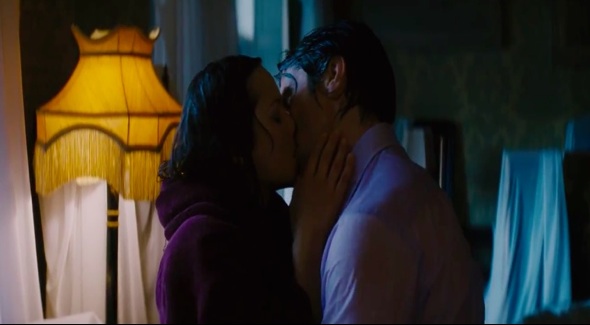