[Enjoy this guest edition of the Musical Talmud series by Steve Lampiris. —Ed.]

“Breakfast at Tiffany’s” by Deep Blue Something seems, on the surface, like a lovely little song.  Guy and girl are together, but are on the verge of breaking-up because they aren’t right for each other. Guy decides to argue to the contrary, citing the titular film as proof of this DOA-esque relationship.  It’s a semi-lighthearted affair.  There’s an air of wink-wink in the song’s chords.  The whole thing’s a tad cutesy.  Perhaps they can work this out…

The reality, however, is more sinister.  Here’s the thing: the narrator of the song (the guy) doesn’t want the girl.  He doesn’t even really seem to care about the relationship between them.  He only seeks to prove the girl wrong.  And in the most dick-ish manner possible.

Let’s first look at the situation.  In the first verse we get the girl’s (somewhat-hypothetical) perspective of the relationship, as told through the narrator:

OK, we have the guy imagining what the girl says should he decide to have this discussion with her.  Note the verb tense – it’s simple future.  It’s not reality, it’s what he is guessing.  He’s trying to resolve whether or not to salvage this relationship based upon what be believes is her view of the relationship.  He could just as easily have asked her what she thought, but in keeping with his personality (more on that later), he begins to form his counter-argument to one that doesn’t actually exist yet.

[I’d like to pause a moment to point something out. The guy is putting up her arguments before she makes them.  He’s essentially straw man-ing her.  He’s not even letting her argue her own way.  He’s doing it for her.  This might make some sense if he were to knock over those points.  But he doesn’t.  So not only doesn’t let her present her side, when his version of her contention is posed, he doesn’t even bother to attack it.  I’m going to put this aside, as this discussion could, in effect, double the length of this piece and isn’t the main thrust of my argument.  For that sake, I’ll leave it there.  From here on, when I refer to “her” argument, keep in mind that it’s in fact him picturing the conversation.]

What’s she’s arguing is essentially, “We’re two totally different people.  We won’t work as a couple.”  Which is a pretty solid foundation for a break-up.  While opposites attract, they certainly don’t have much of a chance staying together.  The guy’s reply is one line:

His response?  “That’s because you’re not trying.”  He’s so sure he’s right that he doesn’t even bother to contend her points.  He’s just going to prove wrong the fact that they have nothing in common.

Enter the chorus, which apparently does just that.

And I said, “What about ‘Breakfast at Tiffany’s?’”
She said, “I think I remember the film
And, as I recall, I think we both kind of liked it.”
And I said, “Well that’s, the one thing we’ve got.”

So you (may) have one thing in common with this girl (that you may not even care about).  So what?  It’s a movie that you’ve both seen and probably both enjoyed.  Worse still, the fact that you both enjoyed it can be disputed based upon the wording.  That doesn’t mean you two are meant to be, or are even good for each other in terms of a romantic relationship.  That’s how friendships work.

But the guy is determined to win this disagreement.  Look at that final line.  He’s saying, “Hey, we’ve at least got something in common.  We’re not total opposites,” which is in direct opposition to the song’s opening line (and what he think she’s gonna argue): that the couple has nothing in common.  The song’s chorus isn’t “Hey, we both like this film, maybe we can be together after all.  We can develop something from this one piece of pop culture.  We might be OK.”  No, he’s simply being a douche and disproving an absolute with a superfluous example.  (Of course, the girl was foolish in arguing in absolutes to begin with, as they only require a single instance to be proven wrong, but I digress…).  The chorus is the guy ignoring the girl’s actual line of reasoning entirely and focusing on one aspect too literally, the one that he can disprove.

Then comes the second verse, and here’s where his feelings about her and the relationship are revealed for what they truly are.  Until now, we are meant to assume that, while they guy’s a bit of an a-hole, he at least wants to be with the girl despite the rocky ground upon which he’s chosen to (re)construct the relationship.  He even goes as far as to seemingly acquiesce her view:

I see you, the only one who knew me
But now your eyes see through me
I guess I was wrong

It’s clear reluctance, but it’s at least an agreement between the two.  He accepts that perhaps the girl isn’t interested in him in the way he’s interested in her.  Furthermore, from her perspective, he’s bled into the background.  Maybe there is hope for him finding some semblance of reality…

So he poses a simple question:

And then in the same breath gives his answer.

Either that’s the most sterile manner in which to say that you want still want to be with her, or the relationship itself is what’s important.  That is to say, the relationship qua relationship is the true value for him: the idea of the narrator having a companion – being able to say he has one – is the reason he’s arguing his side.  Nowhere in the song is it indicated that he cares for her, loves her, whatever.  He just wants to salvage this relationship.  In doing so, he, more importantly, wants to be right.

He then returns to the first verse, effectively giving her a chance to reply to the chorus’s case.  But instead of allowing her a new argument or new point, he simply repeats her words.  The implication is that, since there’s no other way to counter his argument, he’ll just let her argue hers again.  Verbatim.  In his mind, reorganizing or restating her contention makes no difference. Then he replies with the chorus again to emphatically beat this dead horse.

The irony is, his entire argument – really, his entire viewpoint of the situation, of her, perhaps of reality – makes her correct.  He’s either too dense to realize it or too egotistical to admit it.  Had he taken even a moment to think about the words he puts in her mouth from verse one (“No common ground,” “we’re falling apart”), it’s quite apparent that he’s not right for her.  To wit, they have so little in common, he won’t even concede that he doesn’t have anything in common with her.  It’s like a Möbius strip of pure intellectual alpha male egotism.

The whole song is the girl saying, “We’re not good for each other.  We have no real compatibility from which to grow a long-lasting relationship.”  The guy proves her wrong by pointing out that they both “kind of liked” a movie, thus proving her statement wrong.  That’s it.  There’s no, “I wanna be with you, I think we do have things in common.  Look, here’s one. And there’s another.  Let’s give it another try.”  Instead, he simply sets out to prove her wrong in the douchiest way possible.

Even sillier than that, though, is the fact that this entire conversation in verse one and the chorus is theoretical.  (That said, it is possible that the girl’s believes this.)  It may be hyperbolic to a degree, because there must have been something to bring them together in the first place as a couple. So, obviously, it’s not just that they both enjoyed a movie.  But the point is being oversold to emphasize the important fact: the relationship is, in all likelihood, DOA.  The guy, however, is taking this statement literally and argues his case as such.  He doesn’t care about her.  He cares about the relationship because he wants to be right.  And that’s just cruel. 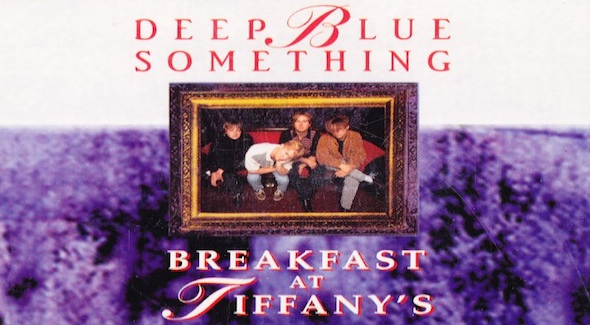 Steve Lampiris is an aspiring writer of pop culture – mostly music – with a degree in political science.  So, in a way, most of his knowledge is about as theoretical as the guy in the song.  He writes for the music blogs The Line of Best Fit as well as ZME Music.

Or read more from… Music, breakfast at tiffany’s, deep blue something, musical talmud

7 Comments on “The Musical Talmud: Breakfast at Tiffany’s”