Scientists estimate that we reached Peak Superhero in the summer of 2008, when “The Dark Knight” sucked the attention of every critic, pundit and sentient moviegoer into its inky nexus. It is not as if the number of movies featuring troubled guys wearing costumes and fighting evil has diminished since then. Quite the contrary. But the genre, though it is still in a period of commercial ascendancy, has also entered a phase of imaginative decadence. 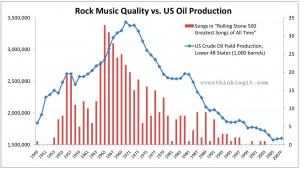 The decline in U.S. oil production is explained by the Hubbert Peak Theory, which states that “the amount of oil under the ground in any region is finite, therefore the rate of discovery which initially increases quickly must reach a maximum and decline.” Makes sense, right? The same theory can apply to anything of a finite quantity that is discovered and quickly exploited with maximum effort. Including, it would seem, rock & roll.

In the summer of 2012, we saw two monumental achievements in superhero movies. Both The Avengers and The Dark Knight Rises capitalized on almost decade-long buildups to smash box office records and win widespread (though not universal) critical acclaim. In the wake of these two movies, both slack-jawed fanboys and jaded critics alike are asking questions like the following:

“Where do we go from here?”

“How can the movie studios top these achievements while recycling the same first-tier characters and trotting out second- and third-tier characters?”

“Will audiences retain their appetite for superhero movies, or have they had enough?”

In other words, have we reached Peak Superhero, the point where we’ve maximized the exploitation of a finite resource and are now entering a period of inexorable decline? 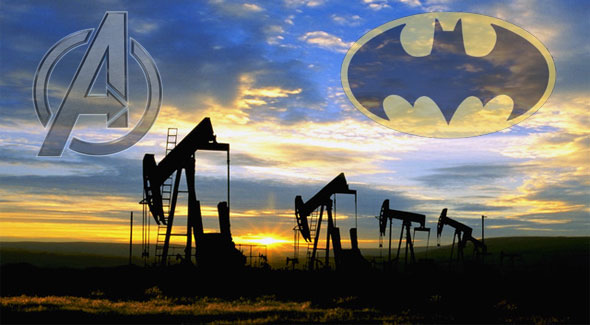 In the above-quoted piece, “The Hubbert Peak Theory of Rock,” I demonstrated how Peak Theory could be applied to a related field of creative works. The basic idea is that there’s a finite supply of the “really good/innovative stuff” (in the case of rock music, Elvis – > The Beatles – > Bob Dylan – > Led Zeppelin), and that after its initial discovery and rapid exploitation, the rate of production will peak and eventually decline over time (Third Eye Blind – > Creed).

Peak Theory is, at best, an interesting yet problematic way of analyzing pop culture. I encourage you to read the original article and its comments to get a sense of the limitations of this approach. That being said, I still believe that applying Peak Theory to pop culture analysis helps us think critically about the limitations that genre and art form definitions place on creative works.

So with that, let’s establish a Peak Superhero hypothesis and subject it to some fun statistical analysis.

Let’s put this series of assertions to the test:

There is a finite supply of quality, mass appeal superhero movies that Marvel and DC can produce. The supply of first-tier comic book characters is finite and not growing, as evinced by Marvel and DC’s failure to produce a new character with the same cultural impact along the lines of Spider-Man, Batman, Superman, the X-Men, and their peers. Because there is this finite supply of first-tier characters, there is also a finite supply of quality movies with mass appeal that movie studios can make based on these characters. There is also a finite amount of time that these movies can maintain such a high level of prominence in the pop culture zeitgeist. As a result of these limitations, critical and audience approval of these movies will eventually peak, then decline, as will the production of these movies.

To test this hypothesis, I assembled a dataset of 49 DC and Marvel superhero movies, starting with Superman (1978) and ending with The Dark Knight Rises (2012). I started with these Wikipedia lists of movies based on Marvel and DC Comics and excluded anything that was direct to video.

To measure quality of these movies, as determined by critics and audiences, I gave each movie a composite IMDB + Rotten Tomatoes score by converting the IMDB rating to a 1-100 scale and averaging the two.

To measure viewership of these movies, I calculated opening weekend attendance based on box office receipts and average movie ticket prices at the time. I also calculated the percent of the total US population at the time who saw these movies during their opening weekends, based on the above attendance calculation and annual US Census population estimates. (Note: I know there are plenty of issues with the methodology in this area; I acknowledge them below.)

To measure overall trends over time, I calculated average ratings and attendance numbers across all movies in a given year. I also applied a third order polynomial trend line to the data to get a sense of both upward and downward trends over the years.

And then I made a lot of graphs.

First, let’s take a look at the rate of production of DC and Marvel Superhero movies since 1978: 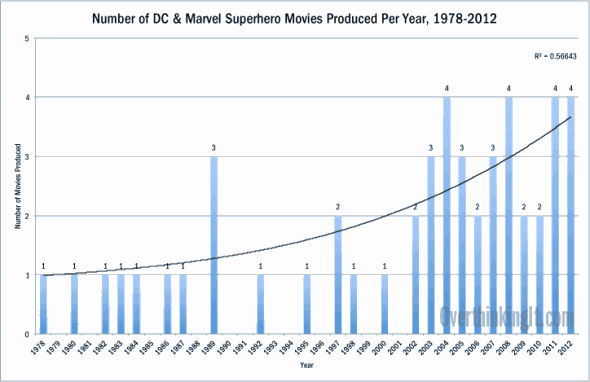 Although A.O. Scott didn’t present any statistics or graphs with his assertion that superhero movie production has continued its increase since 2008, he was absolutely right. The trend remains solidly upward.

Now, let’s look for evidence of Peak Superhero in Quality and Attendance:

I used the average IMDB + Rotten Tomatoes composite scores for superhero movies per year to see if there are any trends in superhero movie quality over time: 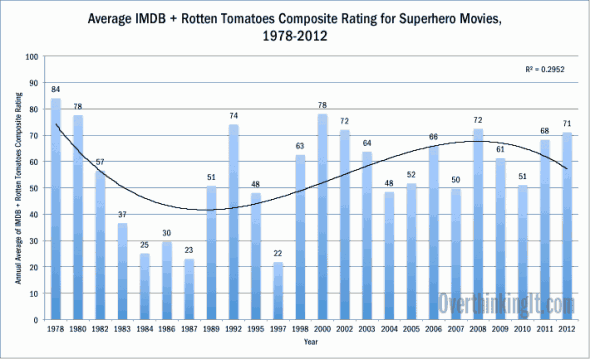 “Aha! Look at the fall/rise/fall pattern! Peak Superhero was in 2008/The Dark Knight after all!”

Not so fast. The R squared value, which is indicative of the strength of the correlation between year and score, is pretty low, which means that strength of any trend that you can extrapolate from this view is going to be fairly weak. More importantly, when you intuitively consider the trend over the last few years since The Dark Knight, any assertion that the critical/fan consensus on big superhero movies has entered inexorable decline just doesn’t hold water. A.O. Scott may complain about the “imaginative decadence” of The Avengers, but the aggregated opinions of the commentariat do not seem to agree with him when it comes to that movie or The Dark Knight Rises.

Again, as was the case with production, quality shows no evidence of Peak Superhero. There’s no decline, hence, no peak. 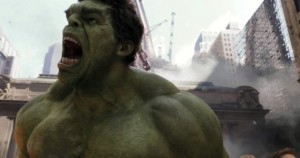 Before we dive into this data, I need to make very clear some important caveats around this particular part of the methodology. First, regarding attendance data: as I mentioned above, I calculated this by dividing the opening weekend box office gross by the average movie ticket price for that year. Although BoxOfficeMojo.com also uses this method, they acknowledge that it’s only good for getting a general sense of movie attendance and is not an exact science.

Second, regarding attendance as a portion of the overall US population: this is my best attempt at measuring the extent that superhero movies saturated the popular culture for any given year. That being said, I started with the already inexact attendance data, and I divided by the total population of the United States, without any regard to size of movie audience or demographic shifts.

Okay. With all of those caveats out of the way, let’s see if there’s any indication that the audience for superhero movies has peaked, either in absolute terms or relative terms.

Let’s get the most obvious question out of the way. Total opening weekend audiences for superhero movies follow an overall upward trend. But this should be of no surprise, given that the production of these movies is also on an upward trend. More movies = larger audience. 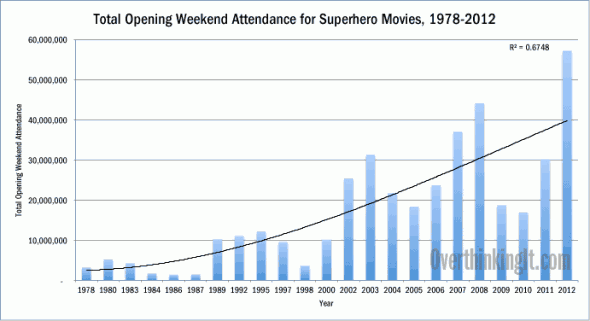 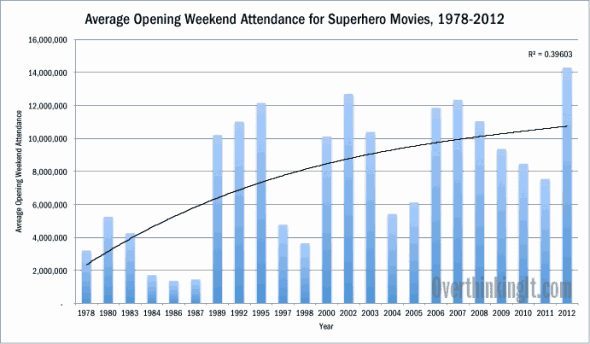 Now let’s look at average opening weekend audiences (by film, by year) as a percent of the total US population for each year: 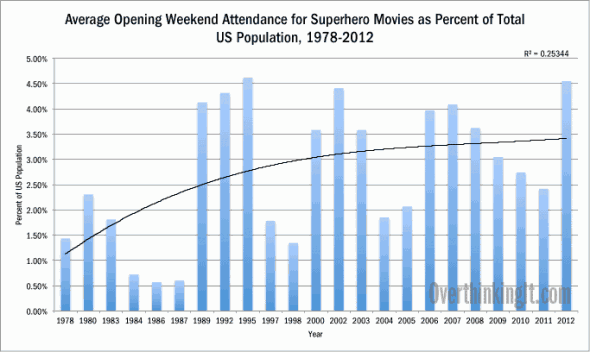 This does flatten out the trend by a little bit. Note that in absolute terms, the biggest year for average opening weekend audience for superhero movies was 2012, but as a portion of the total population, that high point becomes 1995. Yup, Batman Forever was a freaking huge movie at the time. 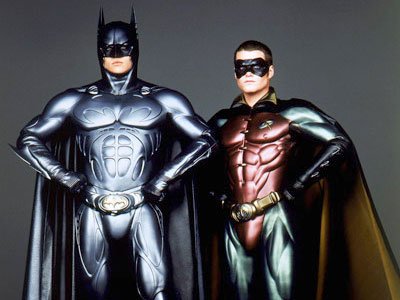 Val Kilmer and Chris O’Donnell as Batman and Robin in “Batman Forever,” 1995. This happened.

(Remember, we’re talking about annual averages, not annual totals. “Batman Forever” was the only major superhero movie in 1995, and 4.62% of the US population went to see it during its opening weekend. In 2012, there were four major superhero movies (Ghost Rider: Spirit of Vengeance, The Avengers, The Amazing Spider-Man, and The Dark Knight Rises), and an average of 4.55% of the US population saw those movies during their respective opening weekends.)

But back to the matter at hand. Is there any evidence of Peak Superhero to be found? Again, the answer is no. Even if the last graph shows a flatter trend, it shows no evidence of a consistent decline or well-defined peak. Oh, and that R squared value is also pretty low.

Conclusion (to the extent that anything is actually concluded)

Have we reached Peak Superhero? 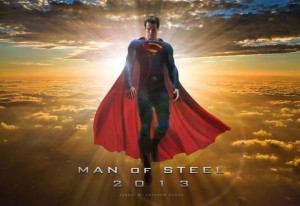 Maybe, but it’s too early to tell without any solid indicators of a decline in superhero movie production, quality, or audience. At the appropriate time in the future,  we’ll revisit these statistics and respond to reader ideas for alternate ways of crunching the numbers. Until then, we should further scrutinize the statistics, but we should also be scrutinizing the genre of the superhero movie as an art form as well. Seriously, where do we go from here? Marvel can’t possibly replicate the pent-up demand for the first Avengers movie. And even with Christopher Nolan producing the new Superman movie and providing creative input, I highly doubt that director Zak Snyder will be able to approach the levels of commercial and critical achievement of the now-complete Batman trilogy.

Let’s go back to Peak Theory to wrap things up. When I present these analyses of pop culture through the lens of this theory, I’m not actually saying that, like natural resources, a given art form has a finite supply, and that commercial/creative decline inevitably follows a peak. Consider, however, that the nature of the entertainment business is such that it encourages rapid exploitation of new art forms and that it expects that past successes can be repeated by copying the last formula for success, with just a few tweaks here and there. And again, consider that there actually does appear to be a finite supply of top-tier superhero characters.

Readers: Want to do your own number crunching? Download this dataset, fire up your copy of Excel, and share your handiwork in the comments! If you do so, some things to consider as you analyze the data:

9 Comments on “Have We Reached Peak Superhero?”