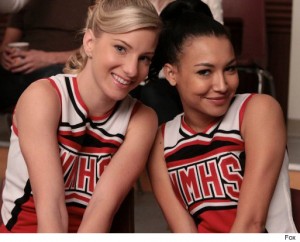 Turn on the television to any given prime-time TV show.  Go on, go ahead, this article will still be here when you get back.  Got it?  Good.

Now, take a look at the couples you see depicted on the show you’re watching.  What do they look like?  Are they gay or straight?  What is their race and ethnicity?  Statistically speaking, odds are that the couple you see on prime-time network television is probably a heterosexual white couple.  The majority of regularly occurring characters on television shows are white, and an even higher percentage of characters are straight.  Of course, plenty of other sources have already commented on the lack (or perceived lack) of diversity in most entertainment mediums, so let’s move beyond that.

Just as a game, let’s think about your favorite same-sex couple from a current television show.  Who do you think of?  Santana/Brittany (Glee)?  Jesus/Lafayette (True Blood)?  Gil/Oscar (The Office)?

Wait a minute.  Didn’t we just say that the majority of characters are white?  Then why are so many same-sex couples interracial?

Well, before we jump to conclusions, it’s important that we’re not confusing anecdotal evidence for an actual trend.  A handful of characters don’t necessarily represent a population sampling, so how to determine if there’s an actual trend in prime-time to depict same-sex characters as more likely to participate in an interracial relationship than to do so with heterosexual characters?  How else than with a database?

I present to you the Gender and Race Character Breakdown Spreadsheet: an analysis of every relationship from 27 different influential television shows that aired during the past three years.

Click to see the raw data in a Google Spreadsheet

Now, before we get too deep into analysis, let’s start with a few definitions.  First of all, what counts as a couple?  “Couples” were defined as any two characters who kiss, go on a date, have sex, are married, or otherwise have a confirmed, cannon, on-screen romantic relationship.

For purposes of this analysis, I counted Latino as a race rather than ethnicity.  The racial breakdown included Asian (referring to East Asia), Black, Caucasian, Indian (including all ethnicities on the Indian sub-continent), Latino, Middle-Eastern, Multiracial, and Native American.  If a character’s race was not specified in-show, I went by the actor/actress’s race.

So, now that we’ve got all of that out of the way, let’s dive into the really interesting part:  the number crunching!

First of all, there are significantly fewer depictions of gay couples on television at all compared to the number of straight pairings.   Out of the 405 relationships represented in this data set, only 12 pairings were among same-sex couples.  Granted, with such a small number of gay pairings, it’s very easy for numbers to get skewed, but for the purposes of this post, the data set will be interpreted as representative of television homosexual depictions overall. 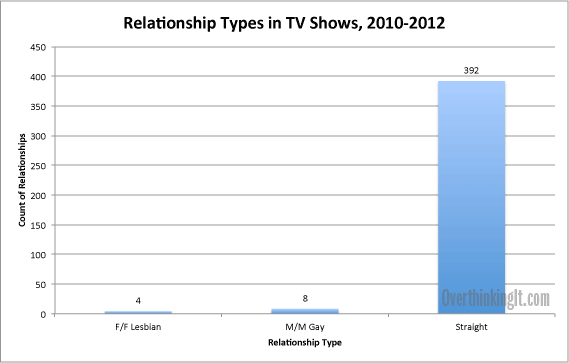 Same sex couples represent just under 3% of all relationships on television, which is consistent with GLADD’s 2011-2012 “Where We Are on TV” report, which reported that only 2.9% of all series regular characters on network television are gay.  Many of these gay characters and same-sex relationships were concentrated in a small handful of shows.  They were particularly represented in this data-set by the shows Glee and True Blood.

In totality, 15.6% of all relationships in the data set were interracial.  This is comparable to the rates in real life.  In a recent study by the Pew Research Center, 14.6% of all new marriages in the US are interracial.  Unfortunately, there is little data on interracial dating, and even less data on rates of interracial dating amongst same sex couples.  As gay marriage is still illegal throughout much of the United States, same-sex couples from many states were not included in the Pew marriage figures.

So, the numbers strongly support the theory that same sex couples are far more likely to be depicted as being in an interracial relationship than straight couples. Why is this?

No matter how progressive society today may be, in many ways, people still make assumptions and use the same cultural coding as a shorthand for characterization.  Gender and race both play a heavy role in our traditional readings of aggressive/submissive, active/passive, strong/weak, and other power dynamics that play out in romantic and other relationships.

Same sex couples, however, can’t typically be depicted using traditional sex roles.  One member of the relationship must be portrayed as having many features of the opposite sex in order to fulfill traditional gender dynamics (i.e., a masculine man with an effeminate man; a feminine woman with a butch woman), or else both participants will be depicted as fulfilling more traditional gender roles, and power dynamics are drawn along non-gendered lines.

So, even though, say, Brittany and Santana from Glee both embody many traditionally female traits – at least to the degree that neither one could truly be described as “butch” or “masculine” in their relationship dynamic, Santana does fulfill an “aggressive, fiery Latina” archetype, allowing her to play a traditionally masculine role (assertive, aggressive, dynamic) without sacrificing her traditionally feminine traits (graceful, vulnerable, passionate.) 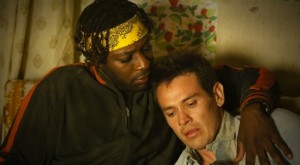 Of course, the power dynamic between Brittany and Santana is rather straight forward, so let’s take a look at a bit more complex relationship: that of True Blood‘s Jesus and Lafayette.

This relationship doesn’t have a clear assertive/passive breakdown, but instead, the couples have a give-and-take, depending on context.  Latino Jesus embodies masculine traits as a mentor and leader, but also serves as a more feminine care-taker, and is the more sensitive member of the relationship.  These traits are consistent with common archetypes of Latinos as depicted in American television: his leadership role is part of his status as a mystical (and exotic) wise person.  His feminine traits are also common in depictions of Latinos, bringing a level of emotional passion and submission to this character.

Lafayette’s masculine traits are tied strongly to his stoicism and his aggressive risk-taking, while his feminine side is expressed through his submission to Jesus’s guidance, and his vulnerability as expressed when just the two of them are together.  These traits: stoicism, aggression, and submission to a stronger male are all elements frequently associated with Black characters in American television.

And so, while these characters’ gender roles can be fluid, their depictions are not utterly alien to American audiences, who have grown used to these power dynamics not through gender roles, but racial roles.

In short, race and gender are similar in that they can both serve as culturally constructed short-hand for many of the assumptions that an audience holds about power dynamics and gendered roles within society.  This can also account for why the instances of lesbian interracial relationship are so much more frequent than those of male/male gay relationships (again, 75% compared to 50%).  Despite over a century of women’s rights activism in the United States, depictions of women in popular culture still are often more limited to archetypes than those of male depictions, leaving female/female relationships more prone to racial coding so as not to venture into risky depictions of women stepping outside traditional female roles.  Although gay relationships are still taboo, showing men in non-traditional roles is still a less risky move than doing the same for women.

As with any medium, television is heavy on cultural coding and using gender and race as short-hand characterization.  Same-sex couples are depicted as participants in interracial relationships far more often than straight couples are, in part because racial stereotype and expectations serve as coding for power dynamics that cannot be depicted through traditional gender roles, as is the case with heterosexual couples.

Angela Jorgensen originally hails from Iowa. She  currently resides in Los Angeles and aspires to write for hour-long television dramas. She works with the Scriptwriters Network and is always up for meeting her fellow West Coast Overthinkers.

30 Comments on “Gender and Race: The Relationship Between Same-Sex Couples and Interracial Depictions in Television”