One of the more intriguing elements of That 70’s Show is the status and nature of Fez within the series. Unlike the other regulars he lacks two signs of concrete identity. He’s the only member of the basic cast to lack either a given name or a surname. “Fez” is not a name, it’s a poorly spelled acronym taken from the words “foreign exchange student.” Though he is not an American, the show goes to great lengths to obfuscate his actual nationality. The show portrays him as a foreigner, but neither the audience, nor the other characters in the series, are allowed to know precisely where he came from. He is, in short, nameless and placeless; and aside from his personality traits, he appears to be distinctly lacking where the tangibles of identity are concerned.

Now how might we explain this rather peculiar circumstance? In terms of the name, conceivably his name might simply be unpronounceable in English, or it might be inconveniently long. Conceivably Fez might come from some ultra obscure country with which the average person in Point Place Wisconsin could hardly be expected to be familiar. But there’s another explanation: Fez doesn’t exist even within the context of the show. This is not about how That 70’s Show is basically a palette swapped Fight Club. No, Fez is not a mere contemporaneous delusion: he is a construction after the fact, created and use for different reasons by Eric Forman and Jackie Burkhart.

That 70’s Show has a serious continuity problem. If we treat the series as a chronicle of events taking place between May of 1976 and December of 1979, the show’s sequence simply does not work. There is sometimes a distinct lack of consistency in the series, there are a variety of contradictions and counter contradictions over the course of the show’s eight seasons. Characters are occasionally recast, and occasionally re-imagined entirely as was the case with Jackie’s mother, and the show features too many Christmases.

There are two obvious explanations. The first is sheer denial that any such problem exists. The other, more interesting, explanation is that the events of the show are not contemporaneous. Meaning, the audience is not shown events as they happen. Instead the audience is shown events and people as they are remembered and discussed years after the fact. According to this explanation the fog of distant memory explains all of the show‘s continuity issues. If we presuppose that this option is accurate, Fez’s lack of a name or homeland suddenly stops being inexplicable. The initial conclusion engendered by the presupposition is that the characters have simply forgot his name and his home country. This conclusion seems unlikely. Fez is simply too close to the other characters for that explanation to hold water.

He actually marries Eric’s sister, albeit out of a desire for citizenship rather than any kind of romantic attachment towards her. And, somewhat controversially, the series ends with he and the longtime object of his affections, Jackie Burkhart, in a romantic relationship. Perhaps his name cannot be transliterated into English, but it defies credulity that neither Jackie, who actually dated him for at least a time, nor Eric, his onetime brother in law, would have no idea where he had actually come from in the first place. In short, the fog of memory alone doesn’t explain why he lacks the signs of identity. However, the distance of time does point towards a more interesting explanation, one worthy of this site’s stated purpose. The distance of time allows for the possibility that he is a construction, a matter of wish fulfillment on the part of other characters. Fez is someone they wish had been there, but wasn’t.

Fez as construction begs the question of constructor; if Fez is imaginary, who imagined him and why? Given the presuppositions inherent in the theory–if we assume that he is indeed a construct rather than an individual–the most likely creators within the rest of the cast are Eric Forman and Jackie Burkhart. Of the regulars Fez is the only one who is a bigger nerd than Eric, and he is the only one who fawns over Jackie. There are occasional auxiliary characters who fit the “more of a loser than Eric” role, and he is the last of three characters to date Jackie. However, within the main group of protagonists he takes the “loser” role, a role that arguably would otherwise belong to Eric. And while other members of the group date Jackie, she is consistently treated as the junior partner in all of those relationships. She is more endured than loved. And while she might be loved, she is hardly respected or admired by anyone aside from Fez. 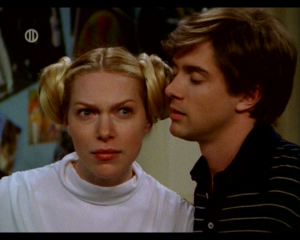 Eric is a nerd. He is obsessed with Star Wars, he reads comic books, and he’s a toy collector. And yet, even leaving aside the show’s central relationship, he’s rather romantically successful. The show demonstrates several one time rivals for his affection. Despite his interests, Eric is never portrayed as romantically unappealing, with one notable exception. After he breaks up with Donna, one episode concerns what amounts to an extended dream sequence which in turn is little more than an extended It’s a Wonderful Life parody. In the world where the show’s central relationship never happened, Eric is essentially Fez.

This suggests that Fez acts as a kind of compensation for Eric’s less appealing qualities. Without Fez, Eric takes his place. Fez, therefore, at least partially exists to make Eric look less odd.

Fez has a narrative arc throughout the series, but that arc is not particularly connected to Eric. His arc is about Jackie, and he is just as much her creation as he is Eric’s. Fez’s arc is a kind of modern replication of the Frog Prince story. On a symbolic level, the Frog Prince story is the tale of a girl growing to admire what she once found disgusting. Before the concluding metamorphosis, the Frog is continually begging to join the Princess’ side, and she is continually being forced to acquiesce until he is revealed to be a prince. Similarly, the terms of the Fez and Jackie relationship are established fairly early on the series. Sure, he’s at times almost disturbingly strange, but in his scenes with Jackie, he’s presented as a good dancer and a better kisser. In other words, he’s secretly a Prince disguised as a frog. 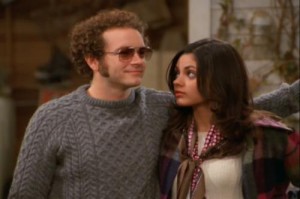 The Frog Prince hints at the central difference between Fez and Jackie’s other boyfriends. He admires her, where they tolerated her. In her two previous relationships, however much Kelso and Hyde cared for her, she was the junior partner. Kelso routinely cheated on her. If we take Hyde at his word, he seemed to care for Jackie against his own instincts. At times he claimed his interest in her was purely physical claiming that his interest in her grew if he imagined her mute.

Jackie’s status as the Junior partner extends beyond her romantic relationships. She’s the youngest member of the group, and in the show’s first episode Kelso’s friends beg him to abandon her. This disdain for Jackie remains a constant theme for much of the series. It is easy enough to imagine why Jackie might feel the need to imagine someone who actually admired her, and did not merely tolerate her presence. Fez’s at times worshipful attitude towards Jackie is almost certainly a reflection of that desire.

Fez’s personality is at times divided between extreme oddity and covert desirability. He’s strange, but he has attractive traits. That divide suggests a tug of war between Jackie and Eric over who this imaginary person was. Eric wants to present his teenage self as cooler than he was by comparison; Fez was the nerd, not him. In contrast Jackie wants to imagine herself falling for someone who actually looked up to her.

Eric constructs Fez out of pure embarrassment. Jackie’s motivation is hidden in her surname. The name Burkhart is very close to the words “broke heart.” The other men in her life either abandoned her, cheated on her, or were incapable of committing to her. It is easy enough to imagine Jackie decades later, broken hearted and alone. Why wouldn’t she pine for the admirer who was never really there? Fez is her attempt to turn a tragedy into a fairy tale, but even she knows that her wish can never come true. This is why she can never give him a real identity. He’s naught but a shadow of what should have been.

[What do you think, Overthinkers? Was Fez a narrative device to add depth to a handful of self-absorbed stoners? Or is there conclusive proof of the man’s existence that we’ve overlooked? Sound off in the comments!] 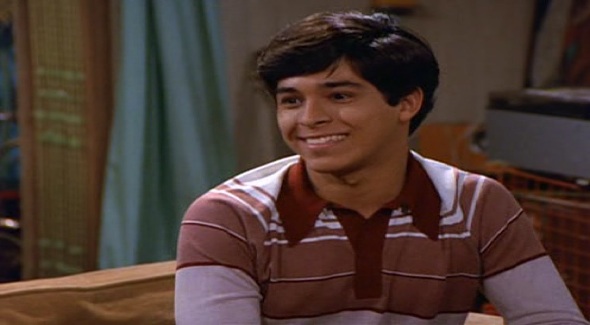 A recent graduate of the College of Wooster, Will O’Connor’s last great work was a 102 page paper on the ideological evolution of fairy tales from the Brothers Grimm to Mighty Morphin Power Rangers.

20 Comments on “That 70s Show and the Imaginary Fez”