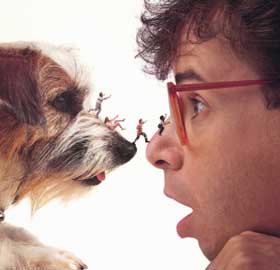 Wayne Szalinski has good news and bad news. The good news is that he has invented a ray gun that can shrink matter down to a fraction of its normal size. This is easily the most important scientific discovery since splitting the atom, and it has the potential to transform the entire planet forever. The bad news is that honey, he shrunk the kids.

Actually, he not only shrunk his own kids, he shrunk his neighbors’ as well. Then he inadvertently swept them up, put them in a garbage bag, and took them out to the curb. After sliding down a giant blade of grass, Wayne’s son muses, “We’re now a quarter of an inch tall and 64 feet from the house. That’s the equivalent of 3.2 miles.” Confusingly, Wayne later says, “At their size, that backyard is like 10 miles,” which is such a different number I wonder if left over from another draft of the script. In any case, it’s a long way.

But Wayne’s a brilliant engineer. No doubt he will consider this problem logically and find a rational solution. Right? Maybe? 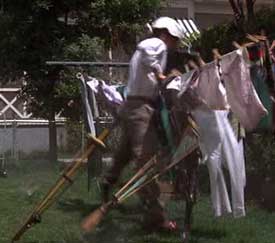 Wayne walks all over the lawn using stilts, looking for the kids through helmet-mounted binoculars.

STUPID BECAUSE: Oh, let me count the ways. First of all, while the stilts have less surface area than shoes, they are still perfectly capable of smushing the kids. Secondly, all the binoculars are good for is seeing the blades of grass more clearly. To find the kids, Wayne would have to carefully push the grass aside to inspect the actual ground. But the biggest downside of the stilts is that they’re highly unstable. Sure enough, Wayne somehow manages to turn on the sprinklers, and his daughter almost drowns. (Incidentally, this is the only PG-rated film I’ve ever seen featuring mouth-to-mouth resuscitation.) 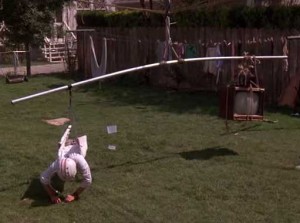 He strings a cable from a second story window to a telephone pole. Then he suspends himself inches above the grass, counterbalanced by a TV. (If anyone has any theories about how you’d get into this device by yourself, go ahead and offer them.) This is more like it. Now he’s close enough to the ground to conduct a thorough investigation, without stomping all over the search area.

STUPID BECAUSE: Look, if you’re going to rest your arms right on the lawn, you might as well just walk on it. And conducting a visual search of every inch just isn’t practical. But his main mistake is letting the dog walk around freely, tromping all over the grass. Yes, the dog turns out to be integral in rescuing the kids, but Wayne should probably keep that thing locked inside. He can clean the carpet later. 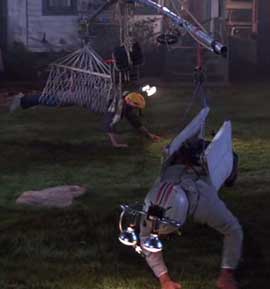 Same as plan B, except now he’s got his wife as the counterweight.

STUPID BECAUSE: Once again, he’s spinning around by putting his hands all over the ground. That seems like small potatoes when his wife suddenly pulls the ripcord, dropping him onto the lawn and flattening up to ten square feet of real estate.  But most importantly, this plan just doesn’t work. At one point, there’s a shot of Wayne passing directly over the kids, magnifying glass inches away from them, and he doesn’t notice.

Diane Szalinski: They’re going to head right for the house.

Wayne Szalinski: You’re probably right. We just got to keep our eyes open.

We can do better. 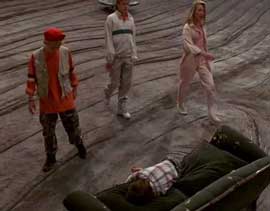 One of the movie's many ironies is that while the kids are swept up, the couch is not. So by fleeing the broom, they sealed their fate.

Right off the bat, Wayne is basing his strategy on a completely unfounded assumption: that the kids would attempt to cross the lawn by themselves. Couldn’t they have decided to stay near the bag, in the hopes that he would come looking for them? It’s not as crazy as it sounds. In addition to the kids, the shrinking ray diminished Wayne’s couch and chair. The kids saw this before he swept them up. Isn’t it logical to assume that before long, Wayne’s going to notice the missing furniture, put two and two together, and check the trash bag. (In fact, this is exactly what happens.)

There are other reasons to focus the search on the bag, and not the grass. When Wayne realized he had accidentally thrown out the kids, he should have considered the possibility (perhaps the likelihood) that one or more of them was hurt during this process. In that case, they would have no choice but to stay put. He really shouldn’t be examining the entire lawn until he’s dissected every centimeter of that trash bag and the immediate surroundings.

(Wayne’s not the only person who isn’t thinking straight, FYI. Any wilderness survival manual will tell you that if you’re lost, your best strategy is to stay put and wait for rescue. If you wander aimlessly into unfamiliar territory, you make yourself far more difficult for rescuers to find, and you risk injury and exhaustion. In this case, the kids aren’t really lost – they can see the house, so they will always be heading in the right direction. But will reaching the house improve their situation? How are they planning to get up the porch steps, which might as well be El Capitan?)

Under these conditions, Wayne’s best option is to give the kids instructions vocally. The simplest version of this would be: “Kids, I’m leaving a blank sheet of paper duct-taped to the stoop! I’ll check it every thirty minutes. Just make your way to that!” Provide the kids with some guidance, so at the very least you can establish a target. But why stop with just one target? The kids mention at one point that there’s a flagstone in the middle of the yard. All Wayne would have to do is take one of his son’s Hot Wheels, put it on the stone, and start yelling for the kids to make their way to that. Instantly, he’s cut the distance the kids have to travel in half. 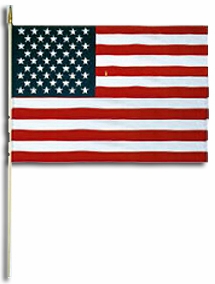 Disney family adventures for some, miniature American flags for all!

Let’s take it further. What if Wayne bought himself a package of 30 miniature American flags on tiny sticks. Then he uses his pully system to stick these in the grass at regular intervals. He could just tell the kids to go to the nearest flag and stay at the base until he finds them. That way, he limits the portion of the lawn he needs to examine to 30 square inches, and the maximum distance the kids need to travel to less than a mile relative to their size. Even if they are injured, this seems doable. Bonus: the lawn would be ultra patriotic.

Within the world of the movie, that’s your dominant strategy: very carefully placing markers on the lawn and giving the kids verbal instructions, thus saving them a very difficult and dangerous journey with no clear goal. But in the spirit of Overthinking It, I need to point out that if you could shrink people down to that size, there’s no way they would be able to hear you. I’m not a biologist, but I do play one on the internet, and I can think of at least three reasons why your ears would stop functioning normally at that size:

In the movie, the kids are perfectly able to understand what their parents are saying. But let’s pretend the movie was slightly more realistic, and their ears were useless. In that case, Wayne should be relying on another sense: sight. If you assume that all regular biochemistry applies to the kids’ shrunken bodies, I believe their eyes should function normally. And so Wayne should be suspending signs above the lawn – the equivalent of skywriting. “FIND NEAREST AMERICAN FLAG,” they should say. “WAIT FOR HELP.” Good advice whether you’re lost in a foreign country or your own backyard. 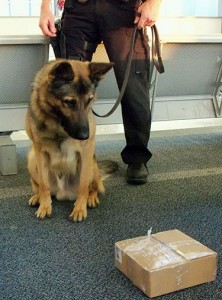 Imagine this suspicious package is a shrunken kid.

But the best strategy might be similar to the way the kids are eventually found in the film. The family dog has no trouble detecting them despite their miniature size. When all seems lost, he allows them to cling to his fur and gives them a ride to the kitchen. It’s a classic deus ex Jack Russell. And this got me thinking about the legendary skills of scent hounds. Dogs can detect incredibly faint traces in the air. Perhaps, say, the smell of a group of children a quarter inch tall. Granted, having a dog search the whole yard would involve a lot of trampling. Maybe Wayne could rig up some sort of doggie harness to suspend the dogs over the lawn, sliding them slowly across the grass and waiting for them to bark.

So what do you guys think? Any other clever strategies for finding the kids? More importantly, how would a human ear function if it were the size of a pinhead?

25 Comments on “How to Find Your Shrunken Kids”