Join us around the Thanksgiving table as we go around and say what we’re thankful for. Then eat a plate of turkey and slip happily into that food coma. You get the gift guide tomorrow.

Early in the days of Overthinking It, in an article that I can’t find even though I just paged through everything he’s ever posted, Stokes posited that there was an inherent tension between the imperatives of storytelling and those of serialized entertainment like a TV show. The former is beholden to dramatic logic, which is to say to internal rules, the latter to the dictates of the market, which is to say to external forces.

One of those forces, over which the creative team behind the show has no control, is the length of the season. Twenty-two episodes. (Or 23. Or 24. It used to be even longer.) Which is just too damn long to do anything interesting. And for that reason, I’m thankful for The Sopranos ushering in a new era of thirteen-episode seasons.

I have said before (again and again) that I think we’re in a second golden age of television. To illustrate, consider the difference between The X-Files or Chuck and Burn Notice or Covert Affairs, which all involve government spooks and conspiracies. In the former pair of shows, the serialized aspects get overwhelmed by the missions of the week, so that when the climax finally comes, the major story has lost momentum. In the latter pair, every episode can at least touch the larger story, and it is possible to maintain tension right through the end.

One counterexample is The Vampire Diaries, which has just done a great job of deploying climaxes, revelations, and new information. I’m not saying that it’s well-written or -acted, but rather that it’s well-structured. It can afford to do this, I think, because it’s in the fantasy genre, and can introduce new rules to the world at will. Then again, I’ve argued before that Burn Notice is in the fantasy genre, and can introduce new conspiracies and corporations with shadowing dealings in international espionage at will. So maybe this whole parenthesis doesn’t hold water. OK, on to the big finish.)

Burn Notice, Mad Men, Weeds, The United States of Tara, Dexter, True Blood, The Shield, Sex in the City, the upcoming adaptation of A Game of Thrones… let’s give thanks for the cornucopia of wonders that the season has brought us.

I’m going to make a bold claim here. The Walking Dead has the potential to be more than a great TV show. It could, just maybe, turn out to be THE definitive zombie story, in any medium. The genre’s Godfather. Night of the Living Dead and Dawn of the Dead will always be great films, but The Walking Dead could beat them at their own game. 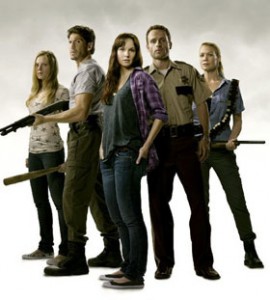 I say this because The Walking Dead has already proven something to me: one cannot really tell a zombie story in a mere two hour film. Not the way it should be told. The true horror of a zombie apocalypse is not surviving that first night in the farmhouse. The horror is the 100th night. Or the 1,000th. How do you live under those conditions? How long would you WANT to live?

The idea of stretching a zombie story over years of storytelling is very exciting to me, because that’s what the genre demands. I want to see how those characters secure their immediate safety and how they plan for their future. I want to see what happens when despair sets in. I want to see how regular people can become monsters, little by little, when there’s nothing to hold them back. I want this show to make The Road look like My Little Pony.

Honestly, I have no idea where the series is going; I haven’t read the graphic novels, and I’m certainly not going to start now. But whether or not The Walking Dead delivers on its potential, the IDEA of a zombie TV show is just awesome. And I’m thankful we’re on our way down that dark path.

I spend a lot of time raging against the boneheaded decision to cancel one show or another — Arrested Development, Pushing Daisies, Veronica Mars. But as stupid as these decisions are, they usually make sense from the network exec’s point of view. The shows weren’t making money, which like it or not is the telos of the TV serial. But try to imagine pitching any of those shows. “It’s a sitcom about the world’s least likable family. Half of the jokes in the pilot are just setups for the really funny gags in the next season! Oh, and just to sweeten the deal: incest humor! And lots of it.” “It’s a magical-surrealist mystery show with dialogue so contrived that the characters might as well be speaking in rhyme! Sometimes they actually will! And every episode will cost like a billion dollars, because the production design will be EXTRAVAGANT!” Veronica Mars seems more appealing on the face of it — plucky girl solves crimes! — but somewhere along the line the money people must have figured out that it was going to be perverse as all get-out, and absolutley riddled with class aggression. So the idiotic network executives I’m talking about are the ones that greenlit these projects to begin with. What were they smoking? And how can we get them more of it? Rationally speaking, none of these shows should ever have existed. Every episode we do have is an unexpected gift.

I’m thankful for all of the companies that are delivering content the way it should be delivered–on demand, through the internet, and outside of the cruel monopoly of cable companies. This is 2010. We have fast Interwebs, and company after company has proven that it’s more than technically feasible to deliver high quality, on demand video over said Interwebs. There is simply no reason why any of us should have to pony up upwards of $100 per month for a package of undesirable, linearly delivered channels. Cable companies know this, and are fighting tooth and nail to keep this archaic system alive at our expense. Taking on this monopoly and the considerable resources at their disposable is going to be one of the great media battles of the early 21st century, and I’m thankful that a few brave souls are willing to take up this challenge. Until they win, I’m thankful for all of the riches that Netflix streaming has to offer in the present, but I can’t wait for what it’ll be able to offer in the future.

That’s a bit of a misnomer, of course. The biggest console games now cost tens of millions of dollars to develop and bring in hundreds of millions in revenue. But I think “the million dollar videogame” really captures the difference between the dinky boxes sliding across a screen of the 80s and the slick, epic adventures of the ’10s.

Yes, face capture technology still rents a home in the uncanny valley. Yes, the plots and dialogue are about as cheesy as your average summer action flick. But that in itself is pretty remarkable – that you can get an experience comparable, or superior, to Eagle Eye or Transporter 3 or The Rock on a video game platform. Perhaps an even better experience, really, because you’re more invested in the success of a character you control than in a character on a screen.

I don’t want big budget movies to go away. But I want video games to improve as a form of entertainment (by which I mean, a form of art). And for every game that sells fifty million copies in its first week, we get fifty million steps closer.

9 Comments on “What We’re Thankful For [Think Tank]”