Since the beginnings of Western civilization, we have understood that knowledge, like freedom, isn’t free.  While we respect the time and effort it takes to learn, we long for a shortcut, a free sandwich from the lunch lady of the mind.  Because it takes so long to acquire and because time is #1 on the list of finite resources, knowledge has always had value. Since the invention of writing, however, that value has been in decline. Thanks to modern technologies, individual facts are worth their weight in Zimbabwean dollars in today’s market.  That devaluation has changed the way we work, the way we learn, and most importantly on a site about pop culture, the way we tell stories.

Ancient astronomers spent decades memorizing the sky.  Their ability to predict eclipses, equinoxes and such made these men high priests.  Then we invented writing, and suddenly, those young whippersnapper priests were spending their nights sitting on the couch, watching the latest episode of Gilgamesh, trusting in written sources for their sacrifices instead of the uphill-both-ways astronomy of their elders.   A couple of thousand years later, Guttenberg opened up the whole deal to the plebians and suddenly, knowledge is off the gold standard.

“Books were prohibitively expensive in the so-called ‘good old days.’ In colonial America, in 1760, a cheap schoolbook cost twice as much as a good pair of leather shoes; Smollett’s Complete History of England cost as much as eighty pairs of shoes, six head of cattle, or thirty hogs. An ordinary laborer had to work two days to earn enough money to buy the cheap schoolbook, or 144 days to buy the Smollett. The modern innovations of mass production and marketing have brought down the cost of a paperback to only slightly more than the American minimum wage.”

These days, whatever the RIAA says, information is free.  Google, Napster, Wikipedia and friends put all the world’s data on the internet and iPhone gave us free* and instant access to that information anytime and anywhere.

At lunch with a guy/girl who’s into Iraqi history? 10 seconds from now you can show her the Gilgamesh story in the original cuneiform.

Out for a fancy dinner that night and want to impress him/her with your knowledge of the stars?  There’s an app for that.

Can’t think of any good pillow talk?  Talk about the implications to society of the fact that the iPhone can now solve a Rubik’s Cube.

Now that your date’s over, we’re here to talk about pop culture, so let’s move on and take a look at how knowledge has been treated in our stories.

In the past, knowledge came in one of two ways and both of those ways had a price.

Scenario 1: you spent years reading, studying, or wandering the desert in order to gain a little wisdom.

Scenario 2: you steal some quick, free wisdom and pay a serious price.

While every once in a while some indy bard would try to tell some impenetrable tales about scenario 1, all the big studio bards knew that option 2 was the way to sell popcorn.

Prometheus was the first big blockbuster to use this theme.  In a sort of Ocean’s 1, Prometheus cons his way into the VIP room at Mount Olympus, tricks Zeus himself, and steals the secret to making fire for mankind.  As knowledge goes, fire’s a pretty big one, enabling us to cook meat, heat water, not die of hypothermia, and cook meat.  Also, it led to meat cooking.   Annoyed that he hadn’t been invited to the big inaugural barbeque, Zeus punishes Prometheus by chaining him to a rock and having an eagle EAT OUT HIS LIVER (which regenerates every night) for eternity.  Punishing humanity too (possession of stolen goods?), Zeus sends down Pandora and a whole box full of goodies. This was a pretty serious penalty:

“For ere this the tribes of men lived on earth remote and free from ills and hard toil and heavy sicknesses which bring the Fates upon men.”

The Greek gods weren’t the only ones punishing people for illicit knowledge. 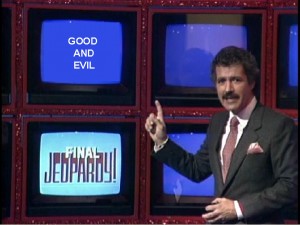 Adam goes on to play the next round.

One day, your great-great-great-etc. grandparents were hanging out in Paradise when they started feeling a bit peckish.  Having just named all the animals, they felt weird about eating them and decided to go with fruit instead.  One bite of the apple from the Tree of Knowledge of Good and Evil (Malus cognitiobonitasmalus) and they suddenly find themselves in a Cormac McCarthy novel.

From ancient times on, from Adam to Frankenstein, from Cassandra (the Greek) to Cordelia (the one on Angel), from Harry Potter to basically every character who’s ever been killed for “knowing too much,” knowing things you haven’t studied almost always come with a price.   Until now.

Starting with the Matrix (appropriately, the first movie that many of us ever downloaded), we’ve been seeing more and more characters have access to vast quantites of information without paying a price for it.

Watching on our television sized monitors while our 1996 RAM chips tried desperately to keep up, we got seriously excited when Neo looked up from the chair and said “I know Kung-Fu.”  This character had obviously been through the ringer, but for this particular information, there was no price.   The man lay down for a few minutes, moved his eyeballs around, then sat up with an entirely new skill set.  This was heaven.  Imagine all the other things he could have simply downloaded: how to hit a baseball, how to talk to girls, how to make Coq au Vin, the compleat works of Shakespeare, algebra 2, or all the words to “We Didn’t Start the Fire.”   In the time it took us to watch the movie, he could have taken enough courses to graduate and it wouldn’t have cost him a dime.

This was cool, new and relatable – Neo downloaded knowledge while we had just downloaded Neo – but it didn’t feel real.  Neo was a cool and stylish computer hacker even before he had access to this information and he had to leave his whole reality behind before he could access it.   The 3 days it took to download the damn movie underscored the fact that we were still a ways away from this sort of thing.

But in 2010, that technology is pretty much a reality, which is why Chuck feels just right.

For those who haven’t seen it, NBC’s Chuck is about a Stanford drop out who lives with his sister and works for a non-actionable version of Best Buy’s Geek Squad.  He’s smart but unmotivated, nice but weak – he’s us and he’s firmly grounded in our world.  That is until his old roommate sends him an email that puts the Intersect, which contains the databases of the CIA and NSA, directly into his brain.  When he comes across visual triggers (the face of an assassin, for instance), Chuck flashes, allowing him to know all about the subject.  Suddenly, he’s a major CIA asset, has a beautiful young handler, and is living a life of excitement.   For two seasons, the Intersect caused problems, making Chuck a target for the bad guys who want this technology while leaving him unable to defend himself.  The show seemed to acknowledge that this knowledge had a price, even if, to my mind, the price was a super hot almost-girlfriend (if he’d just man up) and the kind of life many of us always dreamed about.  The show was well-written, well-acted, and some good, solid escapism. 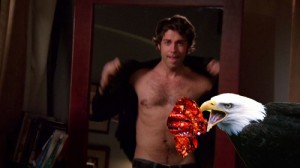 For all Chuck's complaining, the price of knowledge has come way way down since Prometheus's day.

Then, at the end of Season 2, something interesting happened.  Chuck gets imprinted with an upgraded version of the Intersect and suddenly, he can download not only information, but skill sets as well.  In its first use, Chuck learns how to beat up a number of serious bad guys and, credit where it’s due, says “I know Kung-Fu.”

And this time, it feels real.  It feels like the world we live in.

In the four episodes that we’ve seen of Season 3, Chuck has used this new power to learn how to play Mariachi guitar, operate on bullet wounds, and kick people in the face.  He forgets his new skills after using them, but why does that matter?   Should Chuck find himself in need of Mariachi skills again, he can go back to the source – it’s free and it’s easy.  While his handlers and the other spies he comes into contact with have countless hours of training and expertise under their belts,  Chuck’s ability to access the information he needs now routinely shows them up.  Each episode is a victory of Google vs study, the internet vs the library, this generation vs the last.

This has made the last few episodes of Chuck a real delight.  They’re still full of tension and danger, but Chuck has become a whole lot more fun.  In an age when information costs nothing and expertise is a click away, any of us can be heroes.  The knowledge itself is free and access only costs $126/month and putting up with crappy cell service.

Or read more from… Featured, TV, chuck, internet, mythology, Prometheus, there’s an app for that

8 Comments on “Chuck vs. Fire from Olympus”