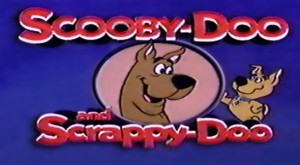 So I was talking with my boyfriend recently about Bandit–a.k.a. the dog from Jonny Quest, and don’t ask—when I had a curious thought.  Why is it that we, as human TV-watchers and filmgoers, are perfectly fine with the fact that dogs in the media sometimes act like dogs and sometimes don’t?  Seriously, am I the only one who finds this strange?  Take Scooby Doo and Scrappy Doo, for example.  It was weird enough when there was only Scooby, the dog who sometimes acted like a dog and sometimes acted like a person.  This was a dude who would sometimes walk on four legs and sometimes on two, and we were fine with that.  This was a dog who could speak English—not like Bugs Bunny can speak English, mind you, but some kind of bizarre pidgin English as approximated by a semi-sentient dog.  And we were okay with this.  I know I was.

But then what happened?  Then, the geniuses behind the Scooby Doo machine threw a wrench into the cogs—and his name was Scrappy Doo.  We were led to believe that the show was set in a universe in which dogs could kinda-sorta talk and kinda-sorta walk on two legs, and then here comes this new dog who speaks perfect English, without some kind of off-the-wall speech impediment, and how not only can walk and run on two legs, but who can box like a pro.

You would think that we, the audience, would have a problem with this.  And some of us did.  But you know what?  I really didn’t.  I accepted this.  I never even justified it to myself by saying, “Oh, I see!  In this universe, dogs do talk and act like perfect, hairy little humans.  It’s just that Scooby is developmentally disabled.  It all makes sense now!”  No, I didn’t say anything like that at all when I was a child.  I just said, “Huh, Scrappy can talk and Scooby can’t.  I accept this without question!”

Well, I’m older now, and wiser, and I realize that not all TV dogs are made alike.  But is there a way we could possibly categorize these canine critters?  Like, say, in a chart?

As President Obama says, yes.  Yes, we can.

Turns out, this work was already done for me.  The champions at TVTropes came up with a sliding scale of anthropomorphism that looks something like this:

On the far left is the “Intellectual Animal,” a dog that acts like a dog and cannot speak to humans.  Now, these dogs are still smart and can save Timmy from a well, and often these dogs can talk to each other or think in English so the non-fluent dog speakers in the audience can understand them.  Some “Intellectual” dogs include dogs like the dogs from The Incredible Journey and the canine casts of 101 Dalmatians and Lady and the Tramp.

Second from the left is the “Speech Impaired Animal.” These dogs can kinda-sorta talk like humans but will often be misunderstood.  Some “Speech Impaired” dogs include Scooby Doo, Astro, and Inspector Gadget’s Brain.

In the middle of the scale is the “Talking Animal.” These animals talk like humans, and, importantly, can talk to humans, but they still act like animals in many ways.  Some “Talking” dogs include Wile E. Coyote (though he doesn’t talk that frequently), Droopy Dog, and Dug from Up.

Second to the right on this scale is the “Funny Animal.” These animals look like animals but talk and act like humans. A dog that fits here is Brian from Family Guy.

The most I looked at this scale, though, the less useful it seemed.  The TVTropes people seemed to be conflating acting human and talking human, which to me seem different enough to be plotted on two separate axes.  The TVTropes scale doesn’t seem to even work that well for TVTropes, as Snoopy the dog is listed under “Intellectual Animal,” “Talking Animal,” and “Funny Animal.”  A dog scale that can’t figure out where Snoopy goes is majorly flawed in my book.

Another problem with the TVTropes scale is that there doesn’t seem to be enough difference between a “Funny Animal” and a “Humanoid Animal.”  Sure, Goofy may look slightly more human than Family Guy’s Brian, but that is a superficial difference.  They both talk, read, eat human food.  You could argue that Goofy is more “Humanoid” because he wears clothes, but “Funny Animals” Brian and Rowlf often wear clothes, too.  It just depends on the occasion. 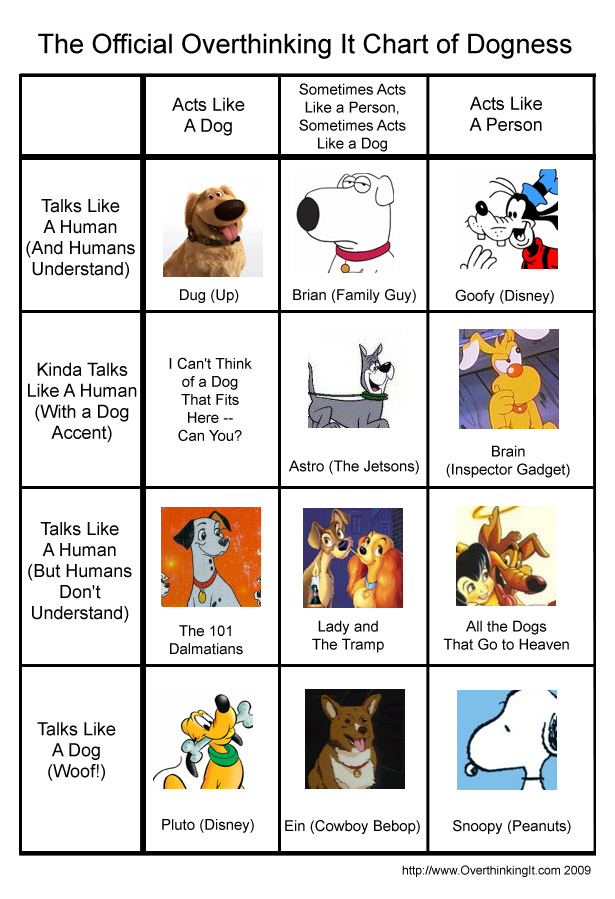 Next time on “Mlawski writes dumb posts about anthropomorphism in the media”: So, uh, can Gonzo really talk to Camilla, or is he schizophrenic, or what?

16 Comments on “From Scooby to Scrappy: An Analysis of Cartoon Doghood”