So, we’ve established Robocop is American. Let’s go further into how he is tragic.

Verhoeven rarely hits his subject matter right on the nose. There’s always a heavy note of irony jerking the characters away from the real point of the story. So, let’s look at the structure. The elements of Aristotelian tragedy are all found in Robocop —

Mythos (story) — Dead cop brought back as cyborg must fight an unjust system and recovery his memories
Ethos (character) — This is of course what drives Robocop, and what is much weaker in Robocops 2 and 3.
Melos (music) — I could hum the Robocop theme music, but you wouldn’t be able to hear me. It’s pretty good. Underrated.

Lexis (words) — Even ED-209 gets cool things to say in this movie. This is a flick where appliances get finely crafted one-liners with fun, deliberately prosodic rhythms.
Opsis (spectacle) — This part is pretty obvious. Why else set that gunfight in that gas station?
Dianoia (ideas) — See above

Peripateia (Reversal) — Robocop has several major moments of reversal. The central one is the start-and-stop montage where it seems as if he is dying, but he is really being rebuilt into Robocop. Most of what follows is not peripateia, but 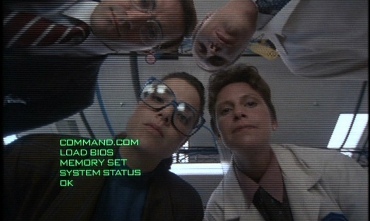 Anagnoresis (Recognition) — The bulk of the plot movement in the movie Robocop enduring and coping with intense moments of recognition as to what has happened to him as a consequence of his tragic choice to dedicate himself to the police. The two most major ones are when he freaks out in his old house because he can’t handle his memories and when he can’t kill Jim Jones, because he has been programmed not to.

You can tell when anagnoresis is happening in Robocop because Peter Weller (the guy who plays Robocop) has this intensely sincere physicality when he is performing Robocop’s pathos (suffering). The jerky lunges, the painful-looking, gnarled contortion of his mechanical limbs, the intense facial expressions (which are extremely rare in the performance of the character of Robocop) — it all screams “O, me miserable! O, me Robocop! Cursed I am among half-men, half-machine, all-cops! Why shalt these scanners see infrared human body temperature signatures, that have seen nothing but darkness!” 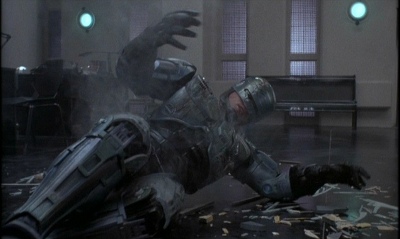 "O, that this too too solid flesh would melt, thaw and resolve itself into a T-1000!"

One note on the “opsis” of Robocop — the film was notable in its day for having the highest visible body count of a theatrically released film (probably excluding things like All Quiet on the Western Front, where a whole lot of guys just run and fall down and historial footage of real-life atrocities). Verhoeven seems to love these gruesome displays, and they are quite affecting, as is evidenced by the fact that people get uppity about them. The intention and reaction is the same with the sexual content of Verhoeven’s pieces.

It is often cited as a mark that they are cheap, frivolous, morally bankrupt entertainments. But Aristotle himself calls for stories that arouse horror, pity and fear as among the highest forms of literary art. Of course, the relationship of Greek drama to the salacious is the opposite of that of our own theatre and art — to the Greeks, the salacious plays were the most religious, and the intellectual ones were the artistically crafted entertainments. 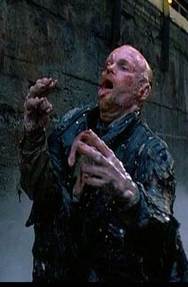 But, our own surface association of a clean conservatism with high art — that in order for a drama to be morally useful, its moral statements must agree with our own creeds; that in order for a play to be good to watch, or good for us, it must be agreeable — is, for the most part, a sham. There is a whole realm of tragedy where we can enrich ourselves as moral agents by watching the imitations of the horrible, the terrifying, the gruesome — because, even if you don’t believe in catharsis, they bring us together as community to face aspect of our realities and challenge us with them, force us to confront them morally.

I would say this is also true of Verhoeven’s other films to one degree or another. There is a lot of awfulness, but because of the human quality of the stories, because of the structure of the storytelling, because of the way it imitates humanity (not the same as reproducing it) and makes connections, I am not convinced that because the movies imitate awfulness and inspire horror that they are morally the worse for it. They are not necessarily pedantic, they don’t necessarily teach good lessons in a systematic, intellectual sense, but the way they appeal to emotions functions in a way that is morally useful to a society that looks to strengthen its own ability to confront reality and make robust ethical choices.

Maybe someday I will write How Watching Basic Instinct Can Make You a Better Person, but I haven’t solidified by ideas on the subject yet.

A word on catharsis, the purging that supposedly happens at the end of a tragedy and makes it all worthwhile — Alex Murphy certainly goes through it, as his own suffering and recognition helps him purge the morally problematic parts of himself and make him a better Robocop.

And a further note on these forms, patterns and characteristics — when I say these things are present in Robocop, that is an understatement. Robocop hammers on these elements of tragedy. The recognitions are huge. The reversals are huge. The spectacle is huge. The acts of mimesis are powerful in their representative quality, even if they are not hyperrealistic.