Four of the five children who win the Golden Tickets have distinct personality types and character traits that match a class of controlled substance. The eventual fate of each child is also directly tied to the type of drug they represent and in fact is either illustrative of it, or ironically tied to it. Charlie, with whom we as viewers are meant to identify, does not precisely fit this model though his fate is also tied to a type of controlled substance (more on this later).

The first winner of the Golden Ticket and the first to meet an untimely fate is Augustus Gloop. From the moment we see Augustus, he’s eating… something. He’s pudgy. He’s sluggish. In the movie, he can barely be bothered to stop eating to answer the interviewer’s questions. When he gets to Wonka’s factory, he rushes into the Chocolate Room and immediately kneels down by the chocolate fountain, dipping his hands into the river and drinking the chocolate out of his hands. It’s a seemingly harmless action; people drink from streams all the time without any ill effects.

Consider this: the Chocolate Room is the first we really see of Wonka’s factory. Before entering, he describes it like this: “Inside this room, all my dreams become realities, and some of my realities become dreams.” It’s a giant room that contains a candy-filled garden. The entire room is an exaggerated slice of the real world: a candy-filled garden designed not only to tempt, but to put the temptation in a setting that gives a feeling of reassurance. Augustus drinks from the river, which is a natural part of this environment, and then… he falls in. He engages in a practice that is natural and should be safe, and he goes to his end inside of a giant pipe. 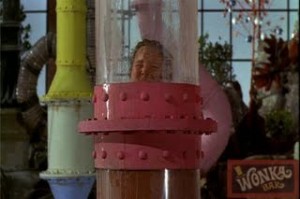 Clear the pipe, then pass the pipe.

Augustus meets his fate prior to the remaining kids taking the boat trip on the Wonkatania. Marijuana bears a reputation of being “the gateway drug”; Augustus’ experience is the gateway to the more sinister experiences to come. His end comes in the river upon which the rest of then children then travel to their own ends, via a ship called the Wonkatania.

The boat trip starts off pleasantly and benignly enough, but then quickly goes awry once the boat is inside the tunnel. This is one of the more notorious scenes in the movie because some of the images projected behind the boat during the voyage are disturbing: a snake slithering across a man’s face, and a chicken’s head being cut off with a cleaver. The boat is churning faster and faster, only Wonka knows what’s going on, and he’s not revealing anything. It becomes literally and metaphorically a “bad trip”. The boat rides ends at the doors of Wonka’s “Inventing Room”.

If Augustus represents marijuana and his fate happens in a stylized candy garden, it’s worth noting that the remaining kids meet their fates squarely within a more traditional factory where things are manufactured, not grown.

Violet Beauregard is the second victim of Wonka’s factory tour. When Violet talks, she talks nonstop in a rapid machine-gun delivery. She’s loud and brash like her car salesman father, and she’s the pride of Mile City, Montana. Violet is middle-America. Like Augustus, Violet is orally fixated but unlike Augustus, who constantly consumes and shows the effects of his consumption, Violet appears to consume while in fact not really consuming much of anything at all. She meets her fate when she takes the Three Course Dinner gum (soup, entree and dessert in gum form) and despite Wonka’s protestations begins to chew it.

Upon chewing the gum, Violet describes the amazing meal she’s not really having until she hits dessert. As she experiences the sensation of blueberry pie, she begins to turn shades of blue and violet and begins to swell up like a balloon, all by eating the very item that’s supposed to satiate her appetite. 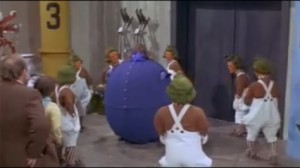 Violet Beauregard represents diet pills (it was 1971, after all), i.e. amphetamines.

Veruca Salt is our second Golden Ticket winner and the third child to fall victim to the Wonka factory. To be fair, though, she doesn’t actually find the golden ticket; her father’s employees find if for her among the cases upon cases of Wonka bars that Mr. Salt has brought on to his factory floor. Veruca doesn’t need to find her own ticket. She’s got people for that. Veruca is wealthy, spoiled, and paranoid. Upon being told that she can’t have a golden egg, she throws a temper tantrum (in song; it’s a musical and you always sing at the emotional crest) and Veruca meets her by standing upon on a giant scale. 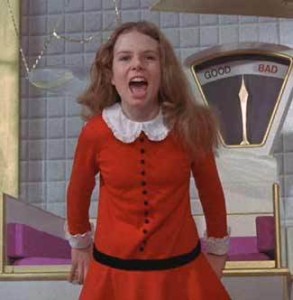 I can't feel my TEETH!

From the moment we meet Mike Teevee, he’s immersed in a reality other than the one everyone around him is experiencing. He’s glued to the television, watching westerns (again, 1971 – Gunsmoke was a Top 10 show). He’s barely engaged in the world around him and can’t really be bothered with it. Mike meets his end in a giant laboratory where perceptions of reality are being explored. Wonka is trying to beam actual candy into television sets. Mike positions himself in front of the giant cameras, where he’s broken down into millions of tiny colored pieces that travel through the ether. When he comes back together again, he’s very, very small. 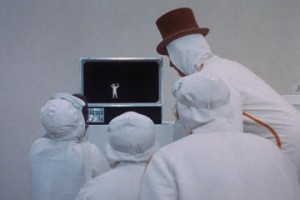 The very tiny doors of perception

Charlie Bucket doesn’t meet a horrible fate – by design. Charlie makes one major transgression in Wonka’s factory, when he samples the Fizzy Lifting Drinks. But it is important to note that this isn’t really Charlie’s idea. It’s Grandpa Joe who suggests doing it: “Let’s take a drink, Charlie. Nobody’s watching. A small one won’t hurt us.” Charlie is initiated into the behavior by the older generation and told that it’ll be okay to have the Fizzy Lifting Drinks. It won’t hurt you. 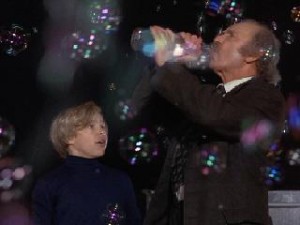 I learned it from watching you, Grandpa!

And while he comes dangerously close to a horrible fate in the exhaust fan, Charlie is able to save himself because he didn’t overdo it. He suffers no obvious effect when this is over: he’s not in danger of being made into fudge like Augustus, he’s not a giant blueberry like Violet, he’s not heading to the incinerator like Veruca and he’s not small like Mike. No, Charlie is just fine. At the end of the film, even though he broke the rules by drinking, he returns the Everlasting Gobstopper to Wonka symbolically rejecting “hard drugs” and because he’s played more or less by society’s rules, he gains it all. He didn’t do anything really wrong, after all; he and Grandpa Joe just shared a drink.

[Like it? Disagree with it? Craving an Everlasting Gobstopper? Sound off in the comments!]

32 Comments on “Just Say No to Wonka”