[This weekend’s second guest article comes from Chris Richards. How could we resist—he takes up one of our favorite topics for overtinking: time travel. Let us know what you think in the comments!] 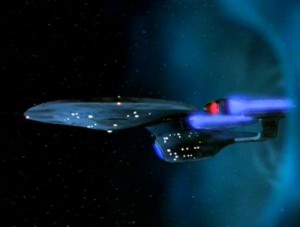 Earlier this month, JJ Abrams rebooted one of the most successful Sci-fi series of all time with his whiz-bang extravaganza.  But, unlike the Nolan-style reboot of Batman, Abrams didn’t ignore the fact that other movies came before.  Of course, unlike the Batman franchise, there were a lot of people who didn’t WANT to forget the other movies.  This, in and of itself, creates a problem: how can anyone reconcile the two?  Abrams decided to use one of Star Trek’s most-controversial plot devices, and creates a predictably paradoxical result.

Before going on, yes, there are major spoilers ahead for the new movie, past movies, and at least one episode of Star Trek: The Next Generation.  You’ve been warned.

In Abram’s Star Trek, the Romulan Nero follows Spock Prime back through time to avenge himself upon the beloved Vulcan, whom Nero blames for the destruction of Romulus, his homeworld.  Nero’s goal is to punish Spock Prime by making the old man see his own homeworld obliterated, so that Spock will share Nero’s pain.

Later in the film, after Vulcan’s destruction, some of our main characters are made aware of the time travel factor and share a brief exchange regarding the ramifications of Nero’s knowledge of future events:

Young Spock: “You assume that Nero knows events are predicted to unfold.  But Nero’s very presence altered the flow of history, beginning with the attack of the U.S.S. Kelvin, culminating the events thereby creating an entirely new chain of incidents that cannot be anticipated by either party.”

These words suggest that this Star Trek is running in parallel to the old Star Trek.  If this is the case, than Spock Prime’s Vulcan is still intact, Nero’s Romulus is destroyed, and that universe continued unaltered as seen in The Next Generation, Deep Space Nine, etc.  However, this does not seem to fit with the previous Star Trek canon involving time travel.  To believe this, one must assume that there are many multiple realities, or dimensions, and that by going “back in time,” what has really occurred is the creation of a new, independent branch of existence.  This is very similar to the type of time travel that is described in Michael Crichton’s Timeline, which deals with quantum mechanics and such.  So, JJ’s Star Trek seems to operate on this Timeline-esque model.

However, if this is the case, than time travel cannot change the past.  Instead traveling back in time takes us to a separate timeline, similar to our own, and allows THAT timeline to unfold in different and unexpected ways, much as Young Spock described.  But if we look to other Star Trek movies, this is clearly not the model that has been used for time travel in the Trek universe. 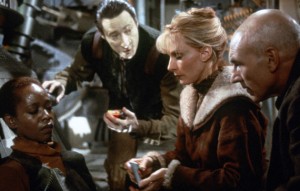 In First Contact, a Borg vessel travels back several hundred years to assimilate a defenseless Earth and prevent it from ever coming in contact with the Vulcans.  The Enterprise is caught in the “temporal wake” of the Borg ship, and is immune to the changes caused by its time travel.  In this way, the Enterprise watches as Earth changes from the one they know to one ruled by the Borg.  This implies that there is a way to change the past, and that the Borg have altered the history of the Enterprise’s world.  This idea relies on a linear view of history, that all of OUR history has occurred in the same basic realm of existence and that going back can change it.  It’s similar to a computer’s hard drive; certain parts can be erased and rewritten.  By going back after the Borg, the Enterprise can stop the invasion and save Earth.

But, if the Timeline theory is correct, the Borg had assimilated a different Earth. Therefore, the Enterprise does not have much reason to save it.  Their Earth is still fine.  Further, by going back after the Borg timeline is already created, the Enterprise does not have save THAT Earth.  They saved another new Earth which they created in another alternate timeline, which should be more similar to their own.

Based on these two movies alone, it’s impossible to get a consensus on which Star Trek prefers.  Things become clearer if we look at an episode of The Next Generation.

Similar instances happen in other Trek installments.  From the fourth movie, The Voyage Home, to the seventh, Generations (not to mention innumerable episodes in each of the different series), we see a relative consensus on the nature of Trek Travel.  (Note: This does not mean that parallel universes cannot exist, such as the episode Mirror Mirror, but time travel is not how someone travels from one to the other).

The writers of the new Trek seem to want to comfort fans by saying that this all takes place in an alternate timeline, but by Star Trek’s own conventions this cannot be the case.  For the new Star Trek to exist, it seems that it must erase the old timeline.  This includes the Original Series as well as The Next Generation; even Voyager has theoretically ceased to be.  This opens the door to numerous other time paradoxes as well, which could be fodder to a whole separate post.  But for now, for all those who are sad to see nearly forty years of beloved character development get wiped away, there is some solace yet.  At least the prequel show Enterprise was unaffected…is that a good thing? 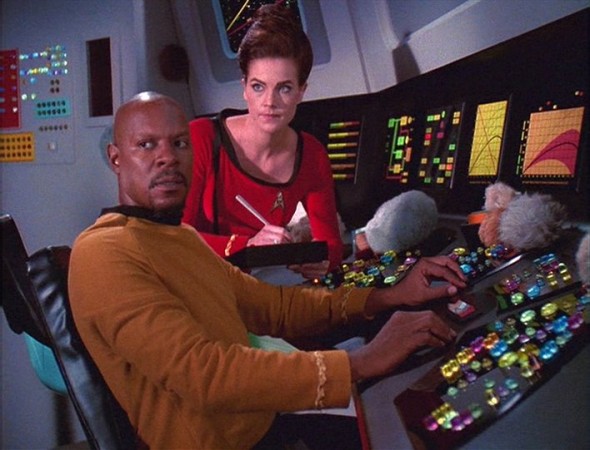