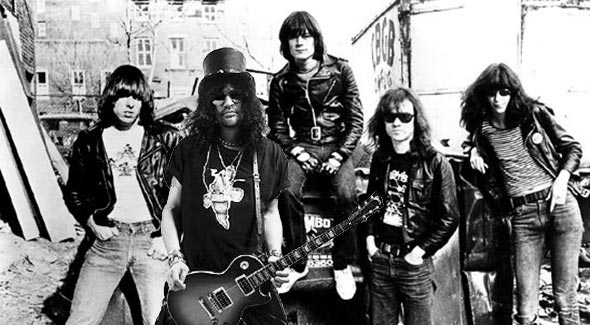 Have you ever wanted to be the singer in the greatest rock band on earth?  Do you hate rehearsing/lugging equipment/ drug and alcohol scandals? For the past ten years, the Punk Rock/Heavy Metal Karaoke band has provided one possible solution to this age-old conundrum- the Rock and Roll is provided and you just add the vocals.   What separates PRHMK from all other karaoke nights?  There are no cheeseball videos, no teleprompters for lyrics (you can use a printed out lyrics sheet if you need it), and you’re backed by an experienced three piece band.  Whether you’re onstage screaming out Dead Kennedys lyrics or in the crowd pumping your fist and spilling your beer while watching strangers howl their way through “The Number of the Beast,” Punk Rock Heavy Metal Karaoke is an exhilarating experience.

As much as Punk Rock Metal Karaoke works on a purely visceral level, once you sober up and step back from the fog of karaoke, the pairing makes less intuitive sense.  Of course, on a superficial level, these genres work together because they are both “loud” versions of Rock and Roll.  From this perspective, Punk/Metal Karaoke makes more sense than “Hip-Hop/Acoustic Folk” Karaoke.  At the same time, there are important musical and cultural differences between these two genres that make the pairing less obvious.  Punk rock has always been much more minimal than heavy metal, relying on a few power chords, no major changes in tempo and dynamics, and songs that clock in under two minutes.  As a result, nearly anyone can write, play, and sing a punk song, and the tremendous democratizing effect of these stylistic aspects of the music are a huge part of the genre’s staying power.  On the other hand, heavy metal has always placed a premium on technical prowess; the singers often have tremendous vocal ranges and the great metal guitarists compete with one another to see who can come up with the fastest shredding and most monstrous riffs.

These musical differences stem from a deeper difference in values and attitudes towards mainstream success and popularity. From the Sex Pistols onwards, punk bands have typically placed a high premium on not selling out to major labels and commercial interests (although there have of course been notable exceptions).  On those occasions when bands with roots in the punk scene have achieved mainstream success, it has largely been by morphing into something else altogether, such as new-wave, alternative rock, or emo. Although metal also has a readily identifiable subculture that is just as repugnant and shocking to middle America as the punk scene, many more metal bands have become MTV-friendly, arena-worthy superstars without toning town the harshness, darkness, or grandiosity.

Part of what allows Punk Rock Heavy Metal Karaoke to avoid any major cognitive dissonance is that the list of songs available to sing is quite well-curated. The particular subset of punk, metal, and other songs included on the were chosen to play to the band’s strengths, to be tractable even for for novice singers,  to be not overly repetitive or long, and to above all to be fun to sing either from the stage or the crowd.  As a result, there isn’t a ton of black, thrash, or speed metal, and there is also relatively little hardcore punk (especially of the DC/Boston straightedge variety), Oi!, or post-punk.  Instead, both the punk and metal songs are heavily skewed towards the emergence of each genre in England (Sabbath and Zeppelin’s bluesy proto-metal; New Wave of British Heavy Metal Heavyweights such as Judas Priest, Iron Maiden, and Motorhead, and the raw punk of the Sex Pistols and the Clash), an in American cities such as L.A. and New York (Motley Crue and Guns ‘n Roses on the metal side; and the Americanized punk of the Ramones, Black Flag, and X).

Even though the list of 250 songs available to Punk Metal Karaoke participants does a lot to ensure a certain amount of musical and thematic consistency, the members of the Punk/Metal Karaoke band itself deserve much of the credit for making this experiment in genre-crossing a success. When they first started hosting the event back in 1999, their initial repertoire was only punk songs.  As they played more together, the list got longer, the band got more used to playing together, and they started to expand into heavy metal.  Comparing mp3s from a range of live shows  between 2004 and 2007 to the recent shows that I’ve attended, it definitely seems that as the musicians have become more technically proficient, they’ve developed a distinct sound that falls much more on the pop-metal end of the spectrum.   Regardless of the original genre of the song, the guitars are distorted, but not too sludgy, the solos are solid but don’t sideline everything else, and the songs are played uptempo, but not out of control. Also, the temperature of the porridge is just right. Even songs that are neither punk nor metal, such as Kelly Clarkson’s “Since U Been Gone” are still fan favorites in part because the band plays them as if they are classic hard rock tracks from the late 70s.  As a result, when you now go to Punk Metal Karaoke, it sounds much more or less like a heavy metal band covering punk rock songs, a phenomenon not entirely without precedent:

Guns N’ Roses do a relatively solid job covering “Attitude” by the Misfits (the song starts about 35 seconds into the clip) — all in all, it is a relatively faithful rendition of the album version of the track, with bassist Duff McKagan covering vocal duties and Slash adding a solid guitar solo to “keep it metal”. However, comparing this live clip with a 1983 video of the Misfits’ performance of the same song really lays bare the differences between punk and metal concerts.

This is typical of many live recordings of punk shows: the song is sped up to the breaking point, less than half of the lyrics are sung intelligibly, and if Danzig didn’t say the song’s name before they played it, you would probably have to listen to it a few times to pick out exactly what song it was, even if you had a working knowledge of the Misfits oeuvre.   Yet at the same time, what is lost in musicianship is gained in the ability of the audience to become active participants in the performance by getting in Danzig’s face, bumrushing the stage, and for a few fleeting moments, shouting into the microphone.

Comparing the G N’ R and Misfits versions of “Attitude” does more than show that there is enough common ground to create a punk/metal karaoke night; it also helps to explain why the combination is necessary to make the event works.  If the event were devoted only to highly polished Guns N’ Roses-style pop-metal karaoke, people who couldn’t carry a tune in a bucket would probably be too intimidated to take the stage, making the event ultimately much less populist.  At the same time, attending a karaoke night that replicated the vibe of a Misfits show also wouldn’t be very much fun- it is kind of hard to sing along with a song that you can’t keep up with, while simultaneously dodging rowdy stage divers who are trying to snatch the mic from your hand.  It is precisely the combination of a well-rehearsed, talented heavy metal band with punk rock’s enthusiastic obliteration of the distintion between audience and performer that makes Punk Rock/Heavy Metal Karaoke both fascinating and enjoyable.