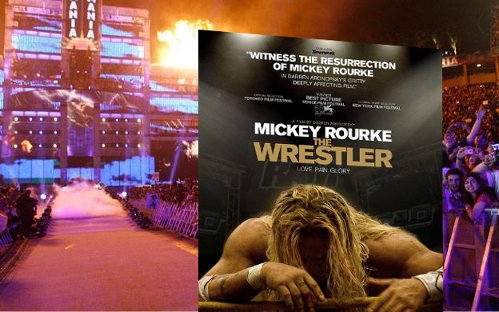 It is GREAT to be here at the Academy of Motion Picture Arts and Sciences! (pause for cheers) My momma always told me, “The Wrestler, when you grow up, you gotta go to that Academy, because them’s good people there, and all good people love watchin’ a good ass-whoopin.”
Yeah! Woo-hah!
But I tell ya, somethin’ ain’t right. And you know I love you all and I love this Academy, but when somethin’ ain’t right, a character-driven slice-of-life drama like me got half a mind to make it right! (pause for cheers) In the squared circle! (briefly lower mike, look left and right, pause for longer cheers)

Now, The Wrestler here is up for two Academy Awards. And you know The Wrestler fought for ‘em, and that he’s plenty grateful.

Mickey Rourke is a guy who works his ass off day in and day out, and he’s gonna win that match.

And you know Marissa Tomei’s got the “assets” to win (pause for cheers). That is one “talented” and “accomplished” actress, who “built a textured and compelling interpretation of her character” — and you know she’s got a great rack . . . where she can put that Oscar. Right next to the other one she got for My Cousin Vinnie. That’d be a chick with a pretty nice pair a’ shiny statues, if you know what The Wrestler’s saying. (pause for cheers) 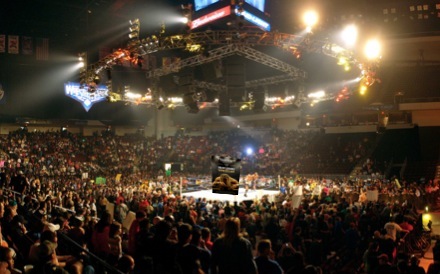 (pause as the voting membership of the Academy of Motion Picture Arts and Sciences yells “Woo-hah!”)

Everybody knows that The Wrestler’s the champ. The people want to see The Wrestler do his thing, which is to go up against other late-release prestige pictures IN THE STEEL CAGE!

And you’re saying The Wrestler doesn’t get to wrestle?

And you know what The Wrestler thinks about that?

That’s why The Wrestler is calling you out. Each of you. I’m talking about a six-way, Hell in a Cell, Samuel Goldwyn Theater Tables, Ladders and Chairs match, right before the Best Supporting Actress Oscar, on the stage, one fall, no submissions, so that everybody in the United States of America can see who’s the Academy Award Winning Best Picture of 2008, and who’s the BITCH.

We ain’t getting played off by the orchestra, either. It’s on, ‘till it’s done, brothers. And the only acceptance speech any of you’ll be giving is braying like a rented mule when The Wrestler gives you the old “Cut and Print” right to the back of your heads!

Shhh. If you listen closely, you can hear all those jabroni critics shaking in their art houses.

Benjamin Button, you say you’re a tear-jerker? This tale of fatherly estrangement right here gonna jerk the tears right out of your face! If Milk knows what does a body good, it’ll stay the Hell out of Dodge. Hey, The Reader, go ahead and read my lips: you suck! (cheers) And Frost/Nixon better resign, or else I’m gonna impeach it… with the big Ram Jam from the top rope! 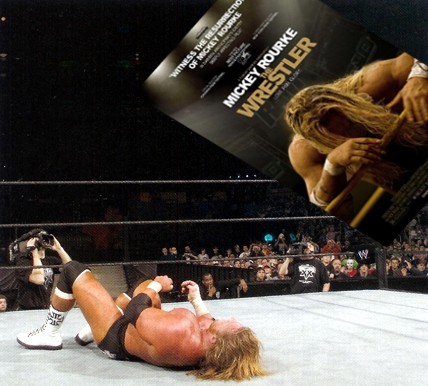 The Wrestler jumps off the top rope at SummerSlam 2006

And I’ve got some special words for you, Slumdog Millionaire. I hear a lot of people talking about how you’re some kind of feel-good Cinderella story. Well, Slumdog, let me ask you this: You still gonna to do that cute end credits dance with that glass slipper turned sideways and shoved up your ass?

Slumdog, when the Best Picture asks you something, Answer him.

Ladies and gentlemen of the Academy, mark my words: this is the year of The Wrestler. On February 22, I will litter the stage with the broken bodies. Best Sound Editing? The Wrestler. Best Animated Feature? The Wrestler. I’m gonna have more little gold men than Willy Wonka.

The only thing all those other movies are going home with is a velvet schwag bag from Prada — full of their own teeth.

7 Comments on “What if “The Wrestler” were a wrestler?”