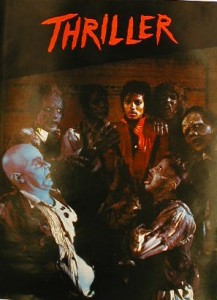 That’s how the Associated Press derisively reported plans to adapt Michael Jackson’s classic song/music video to a Broadway musical. It goes downhill from there; it seems the haters have written this one off about as fast as the Internet’s collective knee can reflexively jerk.

Make a music video a musical? Silly, right? Not really. First, it’s not just based on the music video; there’ll be plenty of other Jacko songs in the show (I know, that makes it a “jukebox musical,” but that’s a rabbit hole that I won’t go down right now). But at its heart, this is just another adaptation of the visual styling and plot from one art form (music video) to another (musical theater).

How is this so different from…say, the upcoming Watchmen movie?

(Image from Rope of Silicon)

There, I did it. I compared the “Thriller” musical to the Watchmen movie. OK, I know, not all adaptations are created equally (No Country for Old Men, novel made into a movie. Wing Commander, video game made into a travesty.), and that the “Thriller” musical is getting bad buzz partly due to Michael Jackson’s tarnished public image. But it’s an adaptation, and that by itself is no reason to condemn a work of popular culture.

So I, for one, welcome the ‘Thriller’ musical, and I do hope that it sets the precedence for a Guns ‘n’ Roses “November Rain” musical:

Hey, you know what else would make a great musical?

One Comment on “The “Thriller” Musical: Not As Dumb of an Idea As You Think”