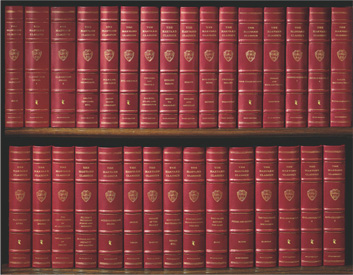 The Harvard Classics Project is a very Overthinking It-type enterprise, in that it combines high culture and pop culture.

On the high culture side is The Harvard Classics. In the first decade of the 20th century, Harvard President Charles Eliot claimed that a five-foot shelf of books could provide “a good substitute for a liberal education in youth to anyone who would read them with devotion, even if he could spare but fifteen minutes a day for reading.” (Which leads me to wonder, was President Eliot implying four years of Harvard was a pointless waste of time and money?)

Collier Publishing saw a potential cash cow, and asked Eliot to pick the titles for his hypothetical anthology. The resulting 50-volume series, first published in 1910 under the perhaps-too-cutesy title of Dr. Eliot’s Five Foot Shelf, is actually pretty impressive. It’s got Plato, St. Augustine, Milton (poetry and prose), Hobbes, Moliere, and all the other biggies. And it also includes some less obvious items, like The Autobiography of Benjamin Franklin, the sayings of Confucius, the Hippocratic Oath, and even a couple things by Darwin. On the other hand, it doesn’t feature a single female writer. It’s a five-foot sausage party. 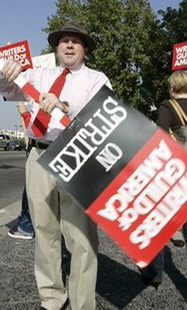 On the pop culture side, we have Chris Marcil. A Yale graduate (and YPMB scriptwriter), Chris has written and produced for Beavis and Butthead, Newsradio, Frasier, and How I Met Your Mother. Last year, he found himself with a lot of strike-related free time on his hands. So he decided to drag out his great-grandfather’s edition of The Harvard Classics, and give it Dr. Eliot’s suggested 15 minutes a day.

And a blog was born.

What makes the Harvard Classics Project work is that Chris is not just skimming the Western Canon to take pot shots at it. He’s studying it. He’s trying to get something out of it. He even does a little internet research on the confusing parts. So his posts are not just clever, they often make some good points.

You can see why Socrates was the Jesus of Cool for intellectuals that didn’t love Jesus. Us bookish types are always tempted by a sense of superiority; half the fun of being clever is being cleverer than. But it’s not as much fun for the people who are being lorded over, some of whom are physically or financially stronger, so one learns a certain becoming modesty, when to hide one’s light, how to avoid being killed by one’s peers.

The Lear we see in the play is stupid and shitty, yet, because he goes wrong greatly, we understand that he had, or has, greatness in him; and Cordelia loves him for that. Cordelia is immensely appealing because, underneath our own robes and furr’d gowns, we understand ourselves to be pretty shitty and stupid also; yet, under that, we hope we have some goodness, and a Cordelia to believe in it. No wonder it was hard to take that (SPOILER ALERT!) they both wind up dead.

This thing is goddamn replete with epic similes. As a Denny’s, where the Grand Slam breakfast is placed before you, and you think, “Must I consume this entire grease-coated meal? Surely it can’t be that good for me” – so larded is the plate of the Divine Comedy with the epic simile.

As you can see, Chris manages to work in some pop culture, which keeps the high-brow stuff from getting too stuffy (he also seems to like hockey). And occassionally, he’ll drop in a reference that reminds you he’s in the sitcom business. Of the restoration comedy She Stoops to Conquer, he muses: “It’s not actually funny, but if you brought it into a room it could be made funny.”

7 Comments on “Best of the Blogs: The Harvard Classics Project”