So recently, I noticed an ad in the subways for a new musical called: 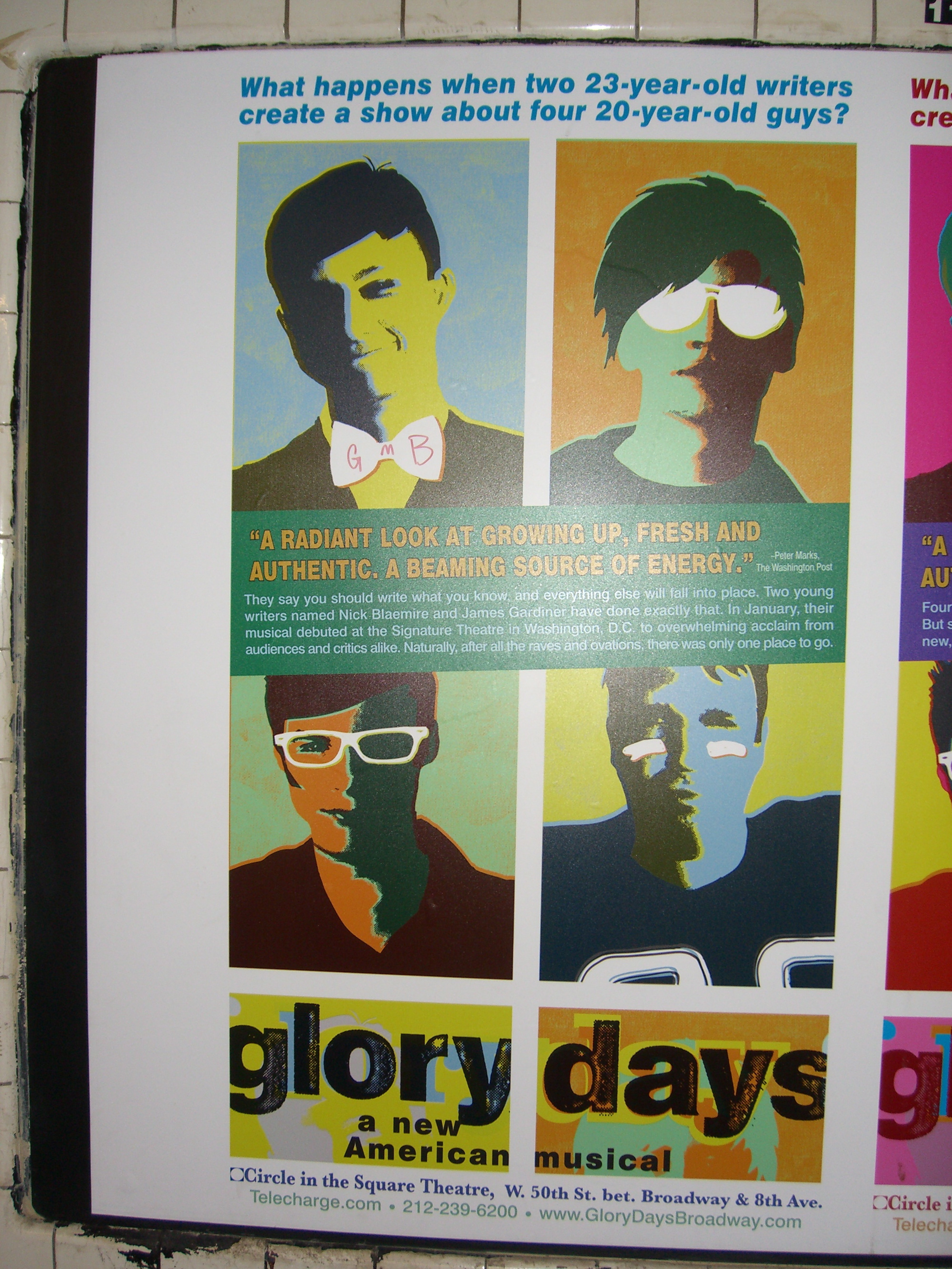 Read on for a little analysis.

The ad presents us with four young-person stereotypes. From upper left, clockwise: the Nerd, the Hipster, the Jock, and the Stand-In for the Writer. But what’s really striking about this poster is the question it asks up top:

What happens when two 23-year-old writers create a show about four 20-year-old guys?

Let me start by saying this: I don’t understand the question. I mean, presumably, it’s supposed to fill us with insatiable curiosity. It’s supposed to make us say, “By God, I have no idea what happens, but I must find out!”

But “What happens when two 23-year-old writers create a show about four 20-year-old guys?” is essentially the same as “What happens when two 23-year-old writers write about themselves?” And 23-year-olds writing about themselves constitutes fully half of the internet. It isn’t exactly the groundbreaking theatrical experiment this poster seems to think it is. What puzzles me is, why would whoever designed the poster assume that this question would intrigue ANYONE?

Just for fun, let me give you a few examples of questions that actually WOULD spark my interest on a poster for a musical:

But the poster is convinced that it’s got a winning hand in playing up the fact that the writers are 23. That brings us to the copy in the middle:

They say you should write what you know, and everything else will fall into place. Two young writers named Nick Blaemire and James Gardiner have done exactly that. In January, their musical debuted at the Signature Theatre in Washington, D.C. to overwhelming acclaim from audiences and critics alike. Naturally, after all the raves and ovations, there was only one place to go.

And look, it’s possible my reading is colored by my own status as a struggling writer, but after, “Naturally, after all the raves and ovations, there was only one place to go,” does anyone NOT want this musical to fail miserably? Oh, and don’t even get me started on why they chose to bill this as “a new American musical.”

So by now, you’re curious to hear what this show is about, right? Well, according to Wikipedia:

Four high school friends meet one night, a year after graduation, on the high school football field’s bleachers. During that year, they have each pursued separate avenues as they move into a new generation. They try to catch up with each other’s new lives at college and reminscence about the simpler, more optimistic times, during the “glory days” of high school. Led by Will, the friends plan to play a practical joke the next afternoon on their former jock classmates at a charity football game using the sprinkler system. One of the friends, Jack, reveals that he is gay, and Andy feels hurt that Jack never told him the truth about his sexuality. Other complications arise as Jack has feelings for Will, and Will breached a confidence of Andy’s. Eventually, Will realizes that he must put his desire for revenge in the past and go forward with his live as the others have done.

So it’s an episode of Dawson’s Creek, but with no eye-candy, and lots of pop rock ballads.

Now, I sincerely hope that Fenzel and/or Wrather responds to this post at length, because they’re the resident experts when it comes to college theater. And make no doubt about it – what we have here is a piece of college theater. Only difference is, instead of costing two bucks, this costs $97.50 (more than a dollar per minute, FYI). But anyway, I seem to recall Fenzel once telling me that in any work of college theater, the odds of one of the characters coming out of the closet increase the longer it goes on.

Finally, since I know nobody on this blog has $97.50, I’m going to do you a favor and present “Glory Days,” the abbreviated script:

[Ed. Note: Though it had enjoyed a successful run out of town, the Broadway production of Glory Days—that of the ubiquitous and annoying poster—closed after its opening performance, joining 2003’s The Oldest Living Confederate Widow Tells All in that unfortunate distinction. This article was written before the closing.]

Or read more from… Culture, Humor, Magazine, Music, Theater, advertising, being in your twenties, broadway, theater

One Comment on “Finally, a show about young white people”