What is “The Names of the Spice Girls: Explained?” 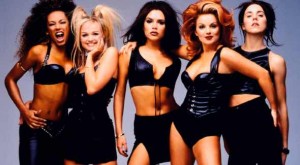 “The Names of the Spice Girls: Explained” is an article published on this very website on this very day: April 1, 2015. As of this publishing, it has either published recently or will publish soon.

The date is entirely a coincidence.

It is a mostly joking but also kind of introspective and at times mildly approaching insightful free association of old memories and useful, but false knowledge.

What is “Who are The Spice Girls?”

It’s a question and answer from the previous article, which makes a bit of a joke about the relative legitimacy of pop music epithets and titles of nobility. Titles of nobility are conferred on women “of consequence,” of course, and this in turn implies the Spice Girls are not “of consequence.” At least not to the degree that Queen Elizabeth II is. Or are they? There’s an irony in the juxtaposition, and a lie, but also a truth.

What is “Who is Scary Spice?”

This was another segment for the article, which was originally about how I was never comfortable with Scary Spice being the Black Spice Girl. And unlike my other insights about the Spice Girls, this was from the period: I remember being as uncomfortable with it back in 1996 as I am now. But then I decided to tone this down and move that joke to the end. While it’s probably the most daring thing to talk about concerning Scary Spice, it is also kind of dull and conventional by modern standards, and it would be tiresome to talk about it for too long. So I talked about some of the other true things about Scary Spice, and kind of mused about a connection between the early history of the Spice Girls and Frank Herbert’s to Dune.

“The Spice Must Flow,” am I right? It’s like what the entire culture was saying at that time.

By the way, throughout the first article, I constantly cited 1994 as the founding of the Spice Girls. And while this is true, they didn’t really “exist” as far as I’m concerned until “Wannabe” came out in 1996. Which makes sense now, because 14 year old me was not sophisticated enough to pick up on the subtle racism. 16 year old me was.

What is “Who is Baby Spice?”

This question and answer from the other article is a bit of a punt. Baby Spice was the least interesting of the Spice Girls characters as far as I’m concerned, particularly because in the performing she never seemed to commit to her character as much as the others, which is probably a good thing, because her character is so deeply odd and creepy.

This was the part of the article where I confronted the distance between myself and the hypothetically “correct” person who ought to be writing this article in accordance with popular taste, which would be some major committed feminist could make the necessary jokes irreproachably alongside enough right-thinking progressivism. So, in acknowledgment of my inadequacy, I name-checked RBG to hopefully benefit from some of her credibility and gravitas. But then I also sort of made fun of her a little I guess, which proves my general unworthiness to write for the Internet.

What is “Who is Ginger Spice?”

I mean, I wasn’t a fan, but I never thought of them as too girly or too cool or too uncool or any of those things. I didn’t feel any particular allegiance to them or exclusion from them. It was impossible to deny their sexuality, but it wasn’t a particularly fraught or charged sexuality as far as pop culture goes. They were quite something to watch from eyes that didn’t understand. And chief among those was Ginger Spice, whom it turns out I understood least of all, because I never figured out the red hair thing.

What is “Who is Posh Spice?”

This segment of the article is an elaborate code. Certain letters are omitted from certain words in this section, and if you fill the letters our in a grid (I won’t tell you what size), it’s an acrostic, with the first name of Posh Spice’s actual husband as the subject. He is, of course, not American soccer star Landon Donovan, but in fact former soccer star Alexi Lalas. Ooops! I gave it away!

What is “Who is Sporty Spice?”

I always respected Sporty Spice. Always. Even when the Spice Girls were on Letterman, and a group of five girl singers had a backup group of five additional female vocalists. Especially then. I wasn’t particularly attracted to her, I didn’t really buy the whole sports thing or care about it, but at some point, and I don’t remember when, I figured out she was the one who knew what she was doing. Or at the very least she was the one who was most fully invested in the musical aspect of the show. Maybe over time this became a sense that she was the one who wanted to get better at it. This part of the article confronted those thoughts and feelings and made a few jokes about it. I was tempted to give Sporty Spice a real name here, and to say she was the only one who earned it, but then I decided it wasn’t quite that extreme, as Ginger Spice also had a multi-platinum solo album.

This is a section of the article that is kind of about how so many of the topics of the articles we are posting today are from pop culture from 10 or 20 or even 30 years ago. And yet those things still feel at least somewhat relevant to discuss; I mean, Spice World was on Netflix Instant just last year. I know, I hovered over it for a good long moment before passing it by, probably for Jack Reacher. What is happening to time that this is happening? I refuse to say it is only because I am getting old.

Something else is bending or turning somewhere. Something is recursive. Something is circling back on itself. Why does the universe seem to demand we keep revisiting the culture of the 1990s?

“If you wannabe my lover,” said Eternity, “you’ve gotta get with my Friends.”