[We at Overthinking It are pleased to welcome David Shechner as the newest member of our dysfunctional blogging family. Dave is a scientician (biochemist), cartoonist, and saxophone colossus (anyone? anyone?) and today weighs in on the death of Arthur C. Clarke. —Ed.] 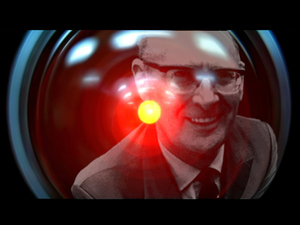 With the jarring loss of Dubba-G behind us, most of us in the Anne McCaffrey reading community had only recently reached some sense of closure, and returned to our daily lives this week. Pi day helped (Look ma! I DO go out on Friday nights! Yeah, it was to a math lecture…). Again, however, our comfortable little worlds were rocked like Alderaan, when we learned this morning of the passing of another great Sage of dorkdom: Sir Arthur C. Clarke.

Excuse me if my typing seems a bit cramped but this is being written – as per my usual idiom – from within the confines of my locker, into which I’ve been unceremoniously stuffed. Frankly, I’d hoped that such treatments would see their conclusion when I graduated from High School. Twelve years ago.

Stupid Chuck Peterson, thinks he’s so great.
Anyway, I’ve digressed from my topic. It’s been a tough month for we, the chosen few who’ve dedicated our lives – like paladins to the downtrodden serfs of yore – to the protection and promulgation of intelligence and science. You probably call us “dorks.” Frankly, we generally call ourselves “dorks.” The nomenclature committee’s pitched other ideas, but they all sounded – well, kinda’ dorky, actually. To give you an example, “Paladins for the Protection and Promulgation of Intelligence and Science” was as normal as it got; the rest sounded like Ronnie James Dio lyrics.

Dorks world-wide have taken some serious blows to our already fledgling egos, lately. The month opened with the passage of Gary Gygax, the noble prophet who taught us that sitting in our mothers’ dimly lit furnished basements, clad in dork garb we’d fashioned ourselves and violently flailing about with cardboard broadswords is relatively acceptable, provided that we did so in groups, and if one of us had taken years committing to memory the content of a large list of rule books. Sort of a ‘buddy-system’ for social ineptitude.

Sorry, that last bit was somewhat offensive. I want to emphasize that – if playing an orcan character – the cardboard sword is likely not to be a broadsword, which can only be handled by characters of positive
alignment. Mea culpa, my bonny compatriots.

Oh, hey! It’s Mr. Johnstone, my old chemistry teacher. Mr. Johnstone! No, over here! It’s Dave, remember me? Yes, yes, I’m back in here. What? No, it was that stupid Chuck Peter… Well, yes, about twelve years.. Hey, where are you going? Ah, Horus dammit.

Anyway, back to our topic at hand.

Sure, most of you in the non-dork community probably think of Sir Arthur as something of a one-hit wonder, referring only to 1963’s classic “Dolhpin Island,” which dared to pose the question “Can an island be crafted out of dolphins?” Of course, if you’ve turned on a television in the last oh – FOREVER – you know the answer, but for the sake of our less pop-culture-savvy readers, I’ll leave it to them to find out. Beyond this, however, A.C.C./C.B.E. was an icon of dorkiness, pretty much the dorkiest man alive. Or rather, until-recently-alive.

Let’s run the numbers: he had Polio. He claimed to be a knight. He wore Hawaiian shirts, and lived most of his life in Sri Lanka. Many of his books, even, had NUMBERS in their titles. And not small numbers, mind you, like ones that would be found on the back of stupid Chuck Peterson’s stupid field-hockey jersey. These were numbers like 2001, or 2010, or 2061, or 3001. Not five-digit numbers, though; the man had some sense of tact. He used email way back in 1982, and was then so proud of his use of the new technology that he published this series of correspondences in 1984 for the world to enjoy. (This is a tradition still followed by my grandma, who still prints out my daily emails, writes a hand-written response on them, and then tries to jam it into the DVD-drive.) And he famously predicted the development of the geostationary satellite for use in telecommunications. Take THAT, Jules Verne!

Sorry, that was right out. Je regrette, Monseiur Verne.

So, in all, March ’08 has been rough for the taped-glasses crowd. Don’t get me started on the primary election season, for which the so-called media have convinced America that we can’t accurately count the number of delegates. Hello! This is why we were given measurement errors, people! Still, with these tragic events, the united dorks have taken to putting Steven W. Hawking and Wil Wheaton under constant protective surveillance. It’s for their own good. On April 1st, when the hex has passed, we can release them back to their normal lives of making semi-regular appearances on washed up TV shows
long past their prime. Or, in the case of Mr. Wheaton, back to his normal life of doing absolutely nothing.

Oh, thank the Sacred Goddess, Mr. Johnstone’s back with a janitor. Oh hey, Rusty, yeah, I remember you. Yep, still in here, heh. Wait, why isn’t the key working? What’s jamming the lock? My… oh, well, yeah, I guess I have put on a few pounds.